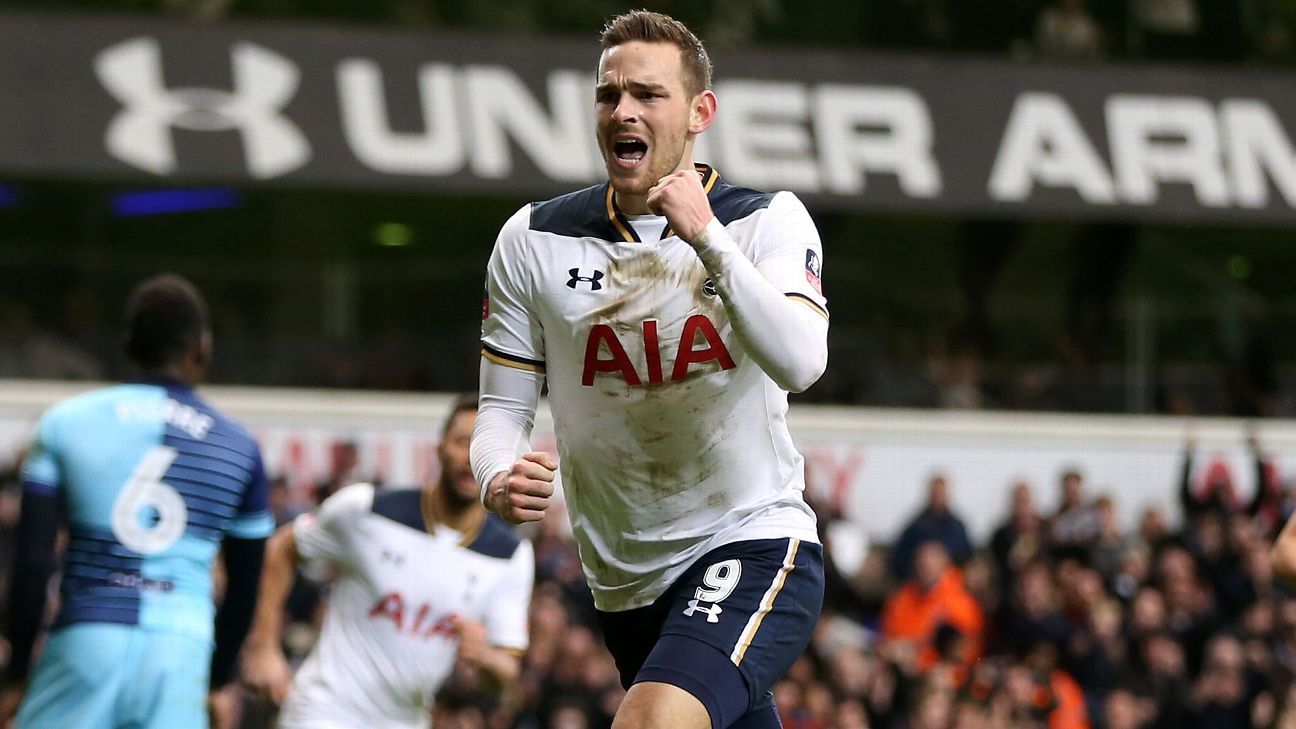 
Of the three first-team players that joined Tottenham last summer and failed to live up to expectations, Vincent Janssen is probably the one who most divides opinion.

But what about Janssen, who arrived from AZ Alkmaar for £17 million after being the most prolific player in the 2015-16 Dutch league?

There have been various moments when it seemed his time was up, but from March onwards there was something of a revival, seemingly triggered by that long-awaited first goal from open play against Millwall.

Janssen led the line well against Burnley on April 1 and was even more effective in the memorable 3-1 victory at Swansea four days later, coming off the bench and setting up Son Heung-Min’s goal.

As has so often been the case, the next step was a backwards one as he missed good chances against Watford, notably hitting the crossbar at point-blank range.

But there was still another encouraging moment as he gathered in a straightforward pass from Christian Eriksen, rolled past Craig Cathcart and shot towards the bottom corner, only to be denied by Heurelho Gomes.

He should have scored, but he had done the hard bit, beating his defender in a tight area with consummate ease. With a little more composure, it is easy to imagine him scoring plenty of similar goals in future.

The following week, Janssen was on target against Bournemouth, and he had another strike disallowed for offside against Leicester.

He has since scored in the postseason friendly in Hong Kong and registered twice in two games for Netherlands — although he also missed a sitter against the Ivory Coast.

So the question remains: can he provide reliable cover for Harry Kane in the long term?

The answer is unclear, but compare his lively performances in the last three months with his bumbling display against Aston Villa in January and there has been an obvious improvement.

Why, then, should he not make further strides next season, as a number of his teammates have done over the past 12 or even six months?

Just look at the reserve full-backs — especially Kieran Trippier, who had a difficult first half to the campaign but went on to start Spurs’ biggest matches in April and May and could now make his senior England debut in the next eight days.

Like a number of his colleagues, Trippier has enjoyed a rapid rise under Mauricio Pochettino. Indeed, it has proved unwise to write the Argentinian’s players off, and prudent instead to analyse their potential, to consider what they might become with more time, work and playing opportunities.

When it comes to Janssen, his goal tally has undoubtedly been disappointing. There have been periods when he has been too happy to play with his back to the target, and his finishing can clearly improve too.

However, much of that is down to confidence and there has been progress in these areas, while his record for Alkmaar and Netherlands suggests Tottenham are yet to see the best of him in front of the net.

More importantly perhaps at this stage, he appears to have an all-round game that suits the Premier League — unlike Roberto Soldado, for example.

Janssen is capable of leading the line alone and imposing himself against powerful centre-backs, using his physicality to create chances for himself and others. In his best games he has shown an encouraging combination of strength and vision.

At 22 (for another nine days at least) there is plenty of time for him to add the final touches and improve his strike rate, and every reason to believe he will feel more comfortable in his surroundings next term. Son blossomed in his second season at White Hart Lane.

Of course, if Tottenham decided they wanted to spend £30m or more on a striker and offer the wages that would satisfy a player commanding such a price tag, then there are perhaps better options than Janssen. He is not necessarily the best they can afford.

But it seems more likely that Spurs will again be looking at the £15-20m bracket and seeking to bring in players who have potential for growth, who can develop under Pochettino and gain in value. Any prospective target would also have to accept being second-choice behind Kane.

Janssen still fits the bill in all of these respects and the fact he is by no means the finished article and has room for improvement is not a reason to dispense with his services.

After all, assuming his replacement fitted a similar profile, they would start from square one and the cycle could be repeated.

Some players don’t get better, of course — Soldado and Paulinho are recent examples. However, in Janssen, it looks like Pochettino has useful qualities to work with and polish, and that it would be worth seeing what another season might bring.