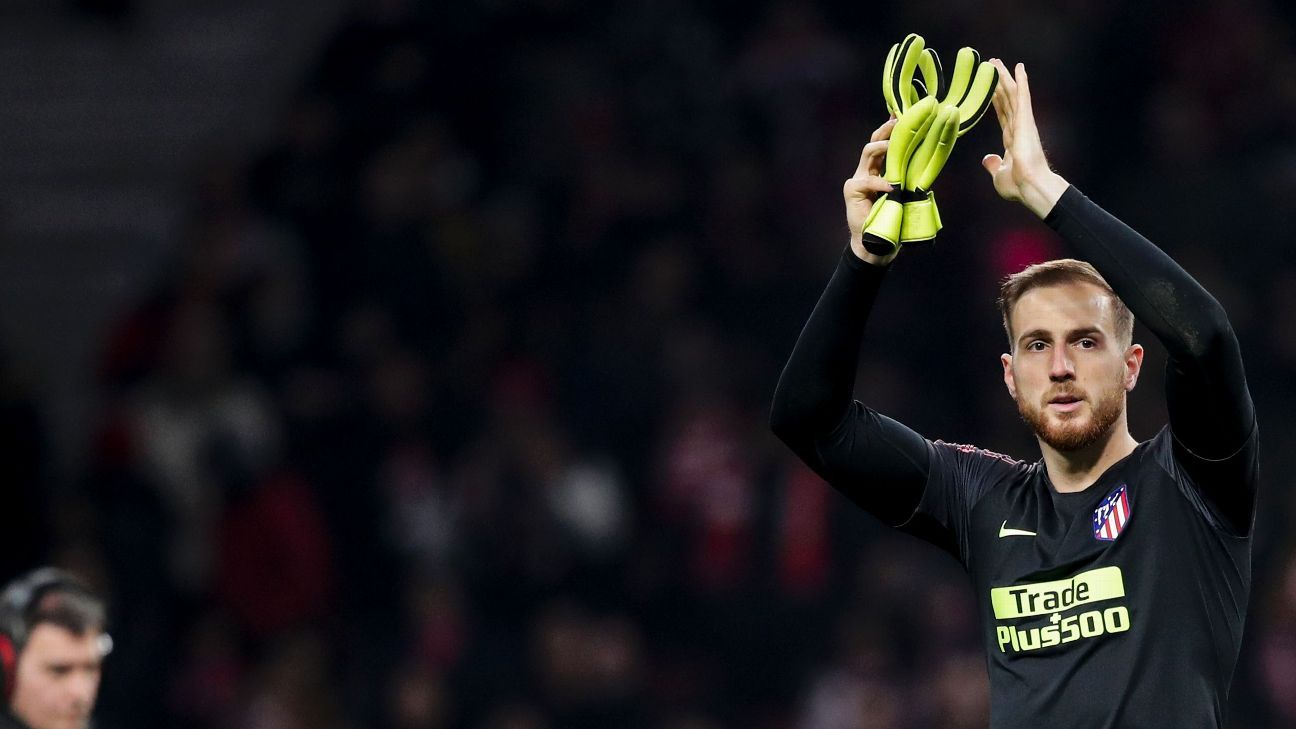 
Jan Oblak is very good at catching. This is not as obvious as it probably should be, and weird though it sounds, it might be part of the reason some people don’t talk about him as much as they should. It’s probably part of the reason you don’t see more of him, anyway, as his hands deny opportunities for drama or double-saves.

In an age of fisted crosses and follow-up shots, Oblak offers no flash and no fuss; instead, he’s a man who actually grabs the ball and holds on to it. One who began behind the goal instead of in front of it, diving around in sync with his dad, shadowing his father’s every footballing move in Skofja Loka, Slovenia.

Matjaz Oblak was a keeper in Slovenia’s third division. Jan Oblak — who left for the capital city of Ljubljana at the age of 10 and was cycling almost 60 kilometres (40 miles) a day to train — reached the first division at 16, was at Benfica by 17, played a European Cup final at 21 and now at only 25 might just be the best goalkeeper in the world. And yet relatively few seem to go on about him. Perhaps in part because he doesn’t go on about himself: no Twitter, no talk, few interviews, no grandstanding or grand gestures. Oblak is secure instead of spectacular. Until, that is, he takes off, which he really only does when he has to, determined as he is not to let that ball past him.

The Atletico Madrid goalkeeper (No. 2 in the FC 100 for 2018, up from fifth a year ago) is spectacular then, that’s for sure — fast, agile and with a remarkable reach — and the ball doesn’t get past him often.

Oblak’s stats are really quite something. For three seasons in a row, starting at just age 22, Oblak won the Zamora award as the goalkeeper who let in the fewest goals in the Spanish league. He also recently clocked up his 100th clean sheet; it took him just 178 games.

Yes, 178. It took Manuel Neuer 188 games to reach the century mark. Víctor Valdes got there after 217. Gigi Buffon had to wait until his 222nd game, while Iker Casillas reached 100 clean sheets after 306 matches. Only Petr Cech was close, but Oblak got there three matches sooner.

Such a feat didn’t look likely at the beginning: On Oblak’s debut, he faced three shots and conceded three goals. It’s fair to say there were doubts about the big guy from Benfica, signed for €12 million. He was no Thibaut Courtois, fans complained, but they needn’t have worried. “That’s a goalkeeper’s life,” he later said, and he ended up keeping 11 clean sheets that year. Since then, his record reads 32, 21, 29.

Last season, he had a clean sheet in 56.2 percent of his games. Keylor Navas, in case you’re wondering, was running at 32.4 percent and Marc-Andre ter Stegen at 40.8 percent. But when The Best was voted for this season, Oblak wasn’t even in the top five keepers, with Ter Stegen, David De Gea, Courtois, Navas and Buffon all finishing ahead of him. Here are some more stats: The best of them let in 0.76 goals a game on average, the worst 1.11; both Courtois and Navas ran at worse than a goal a game. Oblak, meanwhile, let in just 0.57.

When he collected the Ricardo Zamora Trophy, Oblak insisted: “This is not just my award, it’s everyone’s.” He’s right, of course, and those stats probably do say as much about his defence as they do about him. Barcelona, Athletic, Real Sociedad, Madrid, Eibar, Leganes and Malaga all allowed fewer shots last season than Atletico yet no one allowed fewer on target, and the same thing is happening so far this season. But to suggest it’s all about the defence wouldn’t be true; it’s not that Oblak never has anything to save.

“We’ve been unfair to Oblak,” said former Atletico player Milinko Pantic. “He does everything quietly and never complains.”

Now, look, no one is denouncing some great injustice (although manager Diego Simeone might), and most people do recognise Oblak’s ability. It’s also true that he wasn’t at the World Cup, nor was he involved the Champions League for long; getting overlooked is natural enough. Meanwhile, some do include him in the conversation when it comes to the best goalkeeper around — though it can still sometimes seem that with Oblak there’s not much noise.

To take just one example: When the big transfer stories roll round, he’s rarely in the headlines. Not outside Spain, at least. Inside Spain, rather than being shouted about or splashed across the front page, any potential move for Oblak tends to be whispered quietly, like a silent threat never far from the surface.

Fondness breeds fear, and vice versa. Ask at Atletico and they have no doubts. In the stands, they serenade him with the Gypsy Kings. “Obi, Oblak, cada daa te quiero mas!” (“Obi, Oblak, every day I love you more.”) How could they not?

“It’s nice to hear people say I am the best goalkeeper in the world,” Oblak said, and there, at least, they say it often.

“I’ve worked with De Gea and Courtois, but Oblak is the best in the world; he always appears in the key moments,” said Atletico full-back Juanfran.

“He’s as decisive as [Antoine] Griezmann; finding a goalkeeper like that is very important,” insisted former captain Gabi.

Some outside the club agree. Asked to name a goalkeeper, Alisson Becker chose Oblak first. “I like him, I watch him closely,” he said, while Betis goalkeeper Joel put it in numerical terms: “No-one else earns his team more points.”

But it’s not just the quantifiable moments that set Oblak apart; it’s also the unquantifiable — the moments that didn’t happen, the problems that were prevented from even arising, the sense of security he transmits. Former Atletico goalkeeper Abel Resino, who holds a Spanish record for going 1,320 minutes without conceding, insisted that the catching and holding the ball is key. With Oblak, there is no rebound, no second chance for opponents. For his team, meanwhile, there is a greater chance of a quick counter. Oblak’s sobriety and concentration are vital.

“He is the best in the world,” says Simeone. “And, hopefully, he will stay.”

And that’s the thing brought sharply into focus over the past couple of weeks. They say you don’t know what you have got until it’s gone, but perhaps the best demonstration of just how aware Atletico fans are of what they have got is their concern, maybe even the conviction, that one day soon it will be gone.

Marca recently reported that Bayern Munich plan to pay Lucas Hernandez’s €80m buy-out clause this Christmas. The surprise is not that it will happen, but that it will happen to Lucas. This is a fear that has long gripped Atletico supporters, except that it wasn’t really focused on him; it was focused instead on two other players instead.

In the summer of 2017, Oblak said he would play for Atletico for another year, but that he didn’t know after that. This summer, Griezmann publicly contemplated a move to Barcelona. Both had €100m buy-out clauses — a huge amount but probably worth it in their cases, and a figure that enabled them to depart friction-free without a fight.

Atletico faced the prospect of losing their two most important players. No wonder they were worried. Griezmann, of course, stayed — on a new deal that makes him the second-best-paid player in the country. When it was announced, Saul responded by saying: “Now all we need to do is renew Oblak.” A couple of months before that, Torres had noted: “I’d do everything I could to keep him.” Similarly, Juanfran insisted: “I’m sure the club will do all they can to keep Jan; I hope he stays for many years.”

Yet Griezmann’s deal significantly limits Atletico’s room for manoeuvre, as does fulfilling their promises to strengthen the squad. And while Oblak ended up continuing on, too, he has not yet got a new deal, and there was no promise of permanence. The move for Lucas came as another reminder of how precarious Atletico’s hold over their players can be — especially when they’re this good. If the good news was that at least it’s “only” Lucas and not the man they’re really scared of losing, that may prove just a temporary respite.

Oblak’s contract runs out in 2021, and in the meantime, his buy-out clause remains eminently payable; he has turned down offers for renewal. Atletico have not given up. They can’t — he is too important for that. Nor, though, have his suitors, and for all the quiet, they are many. That’s the context to those comments from coach and colleagues: They’re aware that Oblak could go and, more importantly, aware of what that would mean. “I don’t know any champion without a great goalkeeper,” Simeone said.

Atletico have a great goalkeeper, maybe even the greatest of them all. And they’re desperate to do what he does better than anyone else: hold on tight.

As club captain Koke put it: “If I was in charge here, I’d give him a blank cheque.”