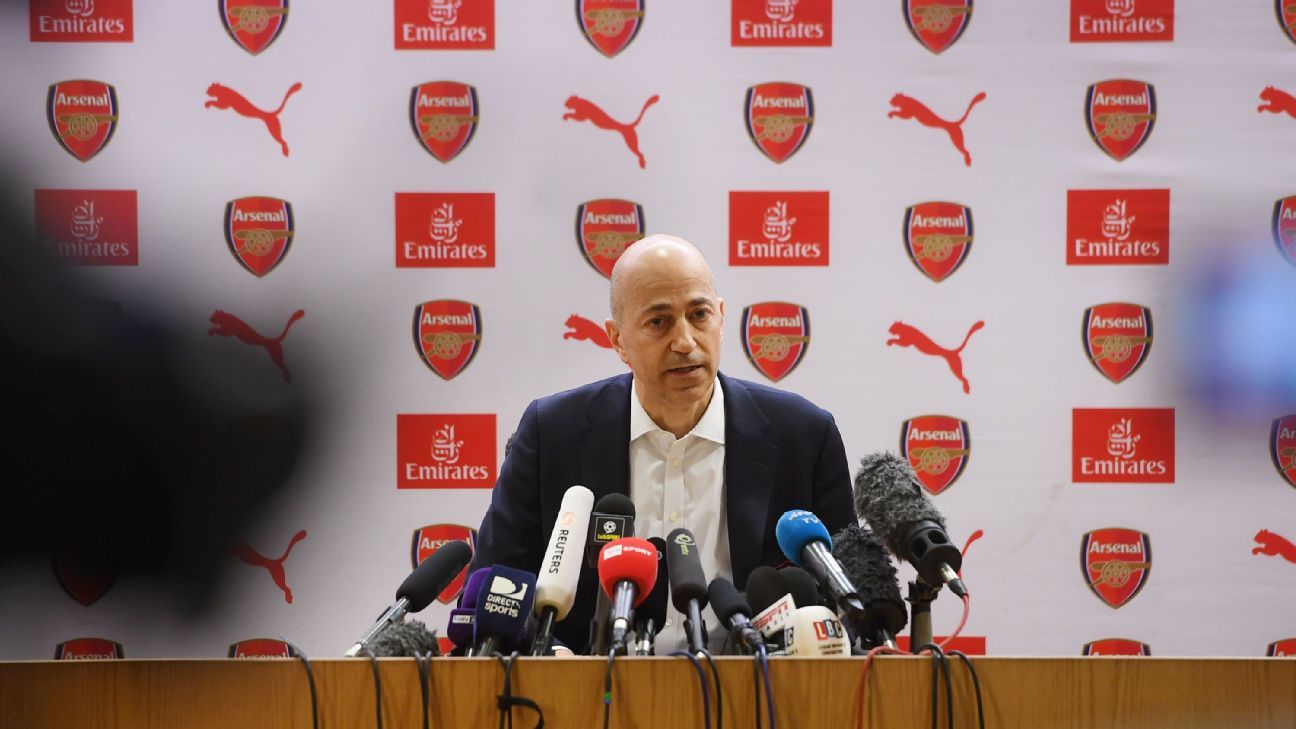 
Ivan Gazidis may feel he deserves a bit more credit. Over the past year he has skillfully negotiated a potential political nightmare by removing Arsene Wenger and installing a modern and progressive power structure at Arsenal. He quickly identified and appointed a prestigious new head coach in Unai Emery and, with his new executive team purring along, has already signed two new players this summer, agreed a deal for another and set in motion moves for yet more.

And yet, when Gazidis attended a fans’ forum this week, the chief executive was confronted with the question, as reported by Arseblog: “Many of us fans feel quite attached to David Dein; do you feel under pressure with that legacy and do you aspire to that?”

Dein, of course, left Arsenal in 2007 and Gazidis has now been in his job for almost 10 years. Almost long enough for a testimonial — and certainly long enough to have established a legacy of his own. But this is the moment that all changes for Gazidis, for good or worse. This summer is the moment he truly takes centre stage.

Working in the shadow of Wenger for the best part of a decade must have left Gazidis with a burning sense of frustration. A chief executive wields great influence at a club, but less so if the man by the touchline is the last bastion of absolute managerial power in football.

Sometimes it was difficult to see what Gazidis was doing. Especially when transfer manoeuvres were being bungled. The apparently immovable Wenger loomed over everything.

Arsenal is not the kind of club where dirty linen is aired in public; certainly not when Wenger is involved. And yet, reading between the lines it was easy to detect tensions at the top. As Wenger clung to power, single-minded in his belief that he could still return Arsenal to the top table, Gazidis seemed to be working around the margins, taking small victories where he could. It required a certain opportunism.

In April 2017, against a backdrop of supporter protests, four defeats in five games and a 10-2 ritual disembowelment at the hands of Bayern Munich in the Champions League, Gazidis attended another fans’ forum and uttered his famous claim that recent results would serve as a “catalyst for change.”

Even then the process was fraught. The next month, in what was seen as a strike back at Gazidis in the developing power battle at Arsenal, Wenger responded to suggestions that a director of football could be appointed with a withering response. “As long as I’m manager of Arsenal Football Club, I will decide what happens on the technical front,” he said. “That’s it.”

It meant that when Arsenal did recruit Barcelona’s former director of football, Raul Sanllehi, the following November, they couldn’t give him that title. But the “head of football relations” certainly now wields some of the technical influence that Wenger worked so hard to protect. Gazidis ultimately won the war and this is now every inch his project. It is bold and ambitious. Whether it works or not will come out in the wash but Arsenal needed change and, to his credit, Gazidis has delivered that.

The chief executive is keen to project what is happening as a collaborative effort between the five power brokers at Arsenal — Gazidis, Sanllehi, Emery, head of recruitment Sven Mislintat and Huss Fahmy, chief contract negotiator — but this is Gazidis’ plan made flesh. As he acknowledged in the fans’ forum this week.

“I felt that when we decided to make the change on the football side,” he said, “that we needed to come up with a new structure and one that involve world-class people that would challenge each other and have that robust debate, but then get behind each other and the decisions that are made and execute them as well as we can.”

It is a huge departure: from the last of the prehistoric, omnipotent managers to one of the most explicit models of collective responsibility seen in football at the moment. Arsenal did not appoint a manager, after all, in Emery, but a head coach. But if Gazidis is surrounding himself with colleagues, he may find that in practice it isolates him too.

For years, Wenger acted as the lightning rod for supporter anger. Many questioned what Gazidis was doing as Arsenal’s fortunes dipped, especially at moments of heightened supporter angst when there was no comment from the board. Wenger, many felt, had been left alone to face the music. But the general tone of the complaint was always “Wenger Out.” With the manager of 22 years now gone, Gazidis has lost a valuable firewall. Now if results go badly, the complaints will go straight to him.

By putting himself front and centre during the transition process, and by limiting Emery’s power, he has made himself more vulnerable. The risks are great. If Arsenal decline even further then it might be Gazidis who bears the brunt. But almost 10 years after he first arrived at the club, he is finally building his own legacy. And that brings potential rewards too.