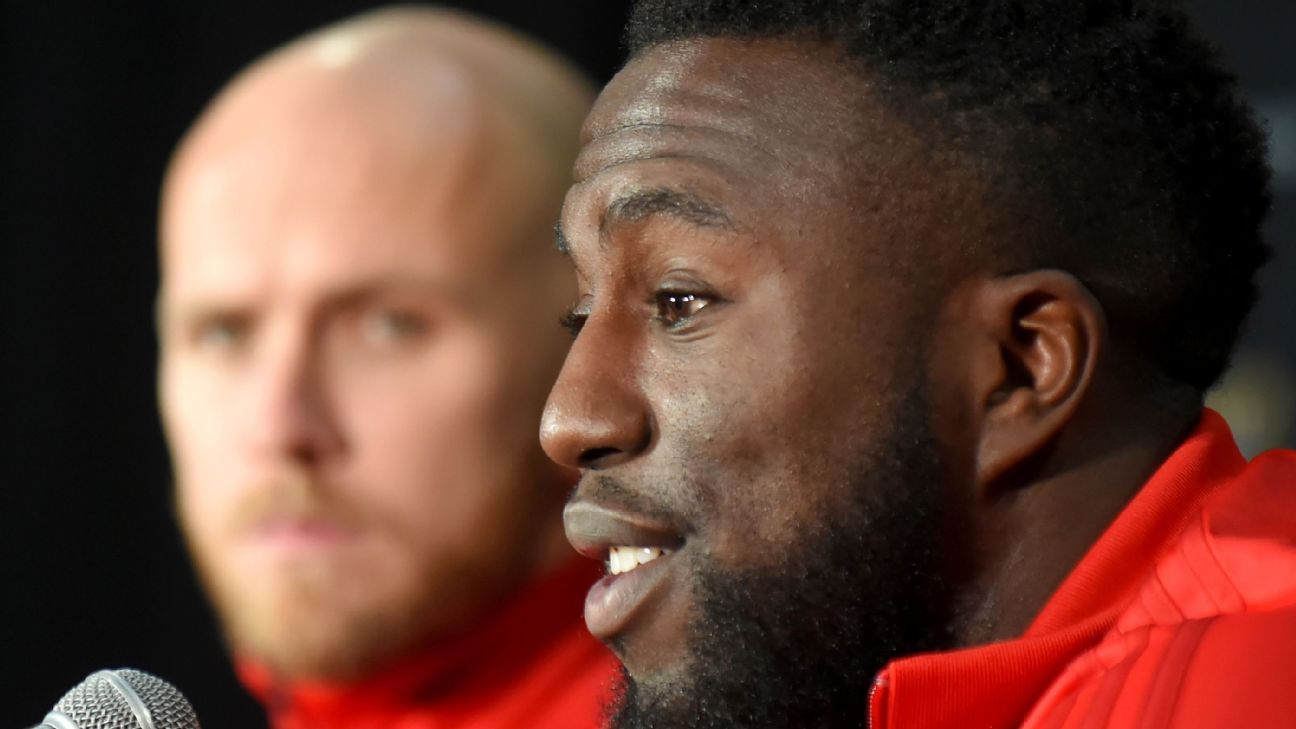 
TORONTO — Toronto FC striker Jozy Altidore was emphatic in his belief that he’ll be able to play in Saturday’s MLS Cup final against the Seattle Sounders (4 p.m. ET, ESPN/WatchESPN), despite an injury to his right ankle.

Speaking at Thursday’s news conference, Altidore was succinct in his responses about his injury, which occurred in the second leg of the Eastern Conference finals against the Columbus Crew.

“Yeah, I’ll play,” he said. When asked if he thought he would be pain-free by Saturday, Altidore said, “It doesn’t matter.”

Toronto will try to claim MLS Cup for the second year running, having fallen on penalties last year to the Sounders. But captain Michael Bradley is of the belief that this is a different Seattle team, with Clint Dempsey fully recovered from a heart ailment that forced him to miss the final last year, as well as new additions like Will Bruin.

“Clint enters into the equation in a big way, in terms of his ability to make goals and set up goals, to turn plays that seem like nothing into danger,” said Bradley. “Obviously [Nico] Lodeiro is a guy that collectively we’re going to have to do a really good job on. His ability to float around the field, to find space and find balls is very good. Will Bruin has been a very important guy for them in this last stretch and been in good form. Then we’ll see. We’ll see how they complement those guys around them in terms of who’s on the field and in what spots. But it’s a very good team and collectively we’ll have to be at our best to make sure we can make things hard on them.”

Toronto manager Greg Vanney said he thinks Saturday’s match will be cagey for at least the first few minutes given that neither team will want to expose their respective defense too much. But he’s confident his side can test the Seattle defense in a way that previous playoff opponents didn’t.

“In order to win games, you’ve got to break your shape a little bit, you’ve got to make things difficult for the opposition, and you have to create some uncertainty for their back group and not make things so straightforward for them,” said Vanney. “I feel as I watched the Western Conference games against them, things were straight forward against them, and they managed all those things very well. So for us it’s to try to make things difficult, get guys into areas that we think we can take advantage of, make sure we get our guys on the ball as much as we can, and execute when we get chances to execute. Again, a good defensive team, but we think we can create some problems for them.”

TFC will be trying to bring home the city’s first professional sports title since the Toronto Blue Jays won the second World Series in 1993. Bradley is aware of the expectations that have been building for his side all year, one that has seen the Reds already claim the Canadian Championship and the Supporters’ Shield.

“In general this is a sports-mad city,” said Bradley. “It has a way of wrapping its arms around its teams and it’s athletes, and if you can embrace that, you can understand that it’s a privilege and a responsibility, that it won’t always be easy and perfect, but you have character, you have personality, you’re willing to represent them and the city in the best possible way, it’s incredible. I think the relationship our team has with our fans and with the city is incredible. It’s so unique and we’re going to draw on that in a big way [Saturday] afternoon.”

But Bradley added that while each TFC player will draw motivation in different ways, revenge isn’t a factor for him.

“In my mind, this is about us, this is about us stepping on field on Saturday and going for it,” he said. “Even in the biggest game, having a group of guys who in a fearless aggressive way are ready to go after things, and that’s what we’ve done every single time we’ve played this year, whether it’s been home or away. Regardless of who we played against, we have stepped on the field trying to be aggressive, trying to go for it, trying to win. We’re going to do that one more time and see where that leaves us.”

Real Madrids Isco caught on camera criticising Zidane with teammates in Clasico
Man City’s worst start under Guardiola is down the club losing their touch in the transfer market
Lampard on Maguire no-call – Holding is allowed not headlocks
How do you recover from record Eredivisie defeat?
Transfer Talk – Barcelona lead Juventus in chase for Wolves’ Adama Traore