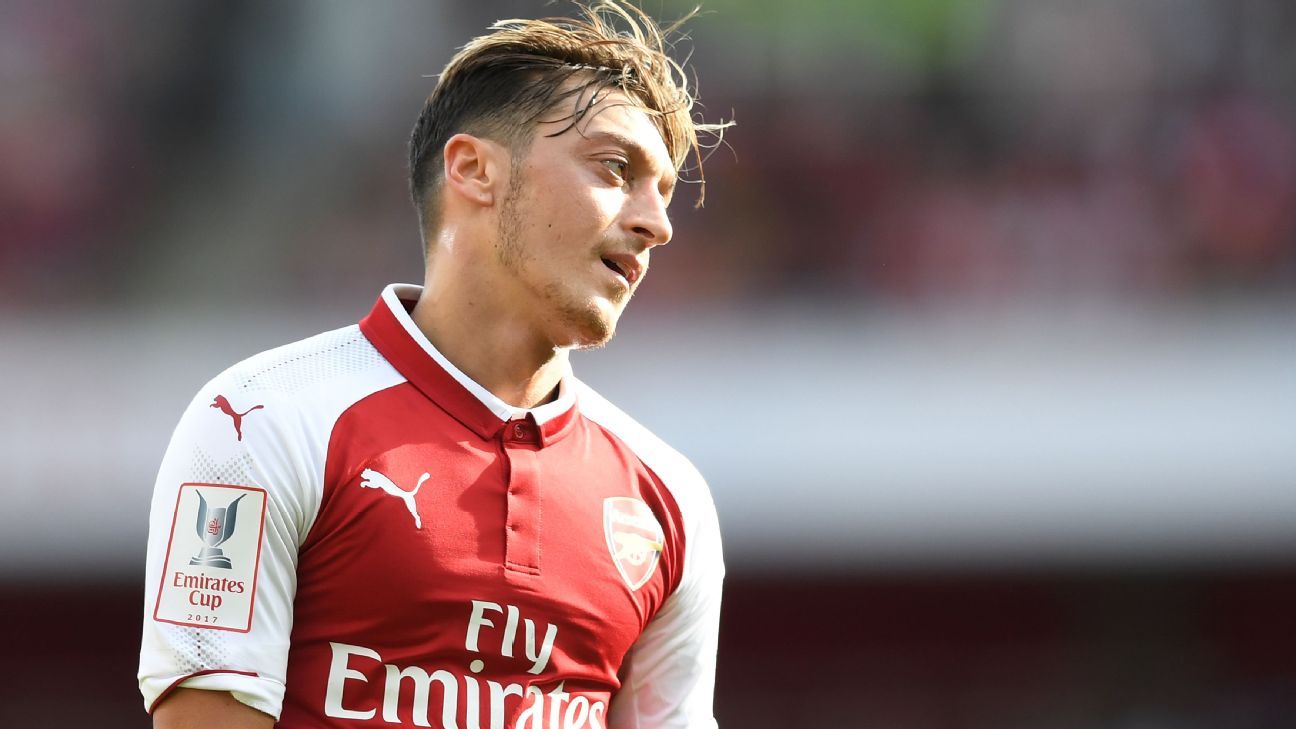 
It’s looking increasingly likely that Mesut Ozil will either leave Arsenal in January or for free next summer — the latest rumour has seen him linked to Manchester United — but the question for the Gunners now is how hard should they try to keep him?

We asked our club correspondents for their thoughts.

Jose Mourinho is a fan of Mesut Ozil after their time together at Real Madrid. But there would be questions about whether or not Manchester United actually need him, especially given that Juan Mata and Henrikh Mkhitaryan can play behind the striker. If Ozil arrives, you think one of them would have to leave.

You can see why it might be tempting for Mourinho to get a player he trusts for either a cut-price fee in January of on a free transfer in the summer. United fans, however, would probably point out that there should be other priorities. United need to find a permanent left-back and, probably, another winger. — Rob Dawson

Ozil is one of the best playmakers in the Premier League but it’s an area where Manchester City are stacked with quality.

Kevin De Bruyne, David Silva, Bernardo Silva and Ilkay Gundogan are in all good form, mostly younger and possibly all better than the Germany international. City have other areas of the team where they need to strengthen and they won’t see signing a new attacking midfielder — even with the cheaper value of Ozil — as a priority. Pep Guardiola demands hard work and energy from his players but Ozil can often go missing in big games and the the pair don’t look to be a natural fit for each other. — Jonathan Smith.

You would be unsure as to where Ozil would fit into this Liverpool side, but that didn’t stop Jurgen Klopp from picking up the versatile Alex Oxlade-Chamberlain from Arsenal. Ozil, too, can play in a number of positions and would be an extremely useful player to have for a squad competing in multiple competitions.

Klopp is a big fan of his fellow countryman and didn’t understand why he was on the end of so much criticism back in August. “He is quality, there is no doubt in Germany about the quality of Mesut Ozil,” Klopp said. If the opportunity presented itself to sign Ozil at the right price, Liverpool would surely at least take a look, regardless of the fit. — Glenn Price.

Ozil is unquestionably a better player than he has shown in the last 18 months at Arsenal; you don’t become a key contributor to star-studded and dominant Real Madrid and Germany teams without being an elite talent. In their dynamic 3-4-3 system, however, Chelsea have no place for a prolifically creative but athletically limited playmaker whose strongest attributes and most troublesome flaws largely align with those of Cesc Fabregas.

Ozil also appears to have picked up too many bad habits at Arsenal, where Arsene Wenger has a long-established blind spot for tactical awareness and positional discipline in his midfielders. It’s likely that Antonio Conte would quickly lose patience. — Liam Twomey

In an ideal world, where wages and rivalry were not factors, Spurs would love a player of Ozil’s quality, particularly as the biggest weakness in the squad is a lack of alternative to Christian Eriksen. Mauricio Pochettino would be confident of working his magic on the German and consistently coaxing getting the best out of him in a more structured and disciplined set-up across North London. Spurs would enjoy getting one over Arsenal in the process, too.

In reality, Spurs could not get close to meeting Ozil’s salary demands and they would not break their rigid wage structure for a player of his age, who has a reputation for sulkiness. — Dan Kilpatrick.

This would be an interesting transfer. The initial reaction is to write it off for a number reasons: his Real Madrid past, the criticism he gets at Arsenal, he’s just turned 29 (Paulinho got plenty of flak for that…).

However, Ozil is a player whose qualities could fit in at Camp Nou. At the moment, there’s an emphasis on Lionel Messi to assist and score. The experienced Germany international could carry some of that burden in terms of creating chances. At a cut-price cost in January, it wouldn’t be entirely surprising if Barca considered it given their failure to sign a creative midfielder in recent years. — Sam Marsden.

They say never go back, although Ozil maintained last year that Madrid still held a piece of his heart, adding: “[Zinedine] Zidane was always my idol. From a little boy I always watched his games and wanted to be like him.”

Now Zidane is in charge, Ozil could get another chance. He is a Galactico signing, at a cut price fee, but his arrival would stunt the development of two excellent attacking players who are much younger: Isco and Marco Asensio. The German would be welcome back at the Bernabeu but probably wouldn’t find himself a place in the XI. Though if Real were to splash out big wages to improve their squad depth, then they couldn’t do much better. — ESPN staff.

If it were up to president Uli Hoeness, Bayern Munich would have a team full of Germany internationals. That’s where the Bavarians transfer focus headed this summer with the addition of Niklas Sule, Serge Gnabry and Sebastian Rudy to their star-studded squad.

So at first glance, it is only natural that the Bayern hierarchy would think about signing the mercurial ex-Schalke and Werder Bremen star. But a move for the 29-year-old is likely to remain just that, a mere thought, as the Bavarians are hotly tipped to have already sealed the transfer of German midfielder, and next big thing, Leon Goretzka, for next summer. As opposed to Ozil, Schalke midfielder Goretzka, at 22, has his best years in front of him, coming with the added bonus of fewer miles on the clock. — Mark Lovell.

Considering Ozil’s recent struggles with Arsenal, he is no longer attractive to PSG. Factor in the Germany international’s age, sizeable salary and the French capital outfit’s need to get rid of surplus attacking talent before adding anybody else to the mix (after a lavish summer), as well as the fact there is already a gaggle of similarly inconsistent figures — form and fitness-wise — at Parc des Princes, Les Parisiens should stay well away from him. Ozil’s Arsenal teammate and soon-to-be-free-agent Alexis Sanchez, on the other hand… — Jonathan Johnson.

AND WHAT ABOUT ARSENAL?

Arsenal’s decision, in the end, comes down solely to Ozil’s attitude. There’s no doubting his quality and the fact Arsenal are a better side when he’s running the attack like an orchestra conductor. But the Gunners can’t afford to carry anyone who is less than fully committed to the cause.

If Ozil makes it clear his heart is elsewhere, Arsenal would be better off getting whatever they can for him in January. Especially with the likes of Jack Wilshere, Aaron Ramsey and Alex Iwobi all craving Ozil’s attacking role. One thing is for sure: Arsene Wenger’s team will never be short of No. 10s, no matter what happens. — Mattias Karen.