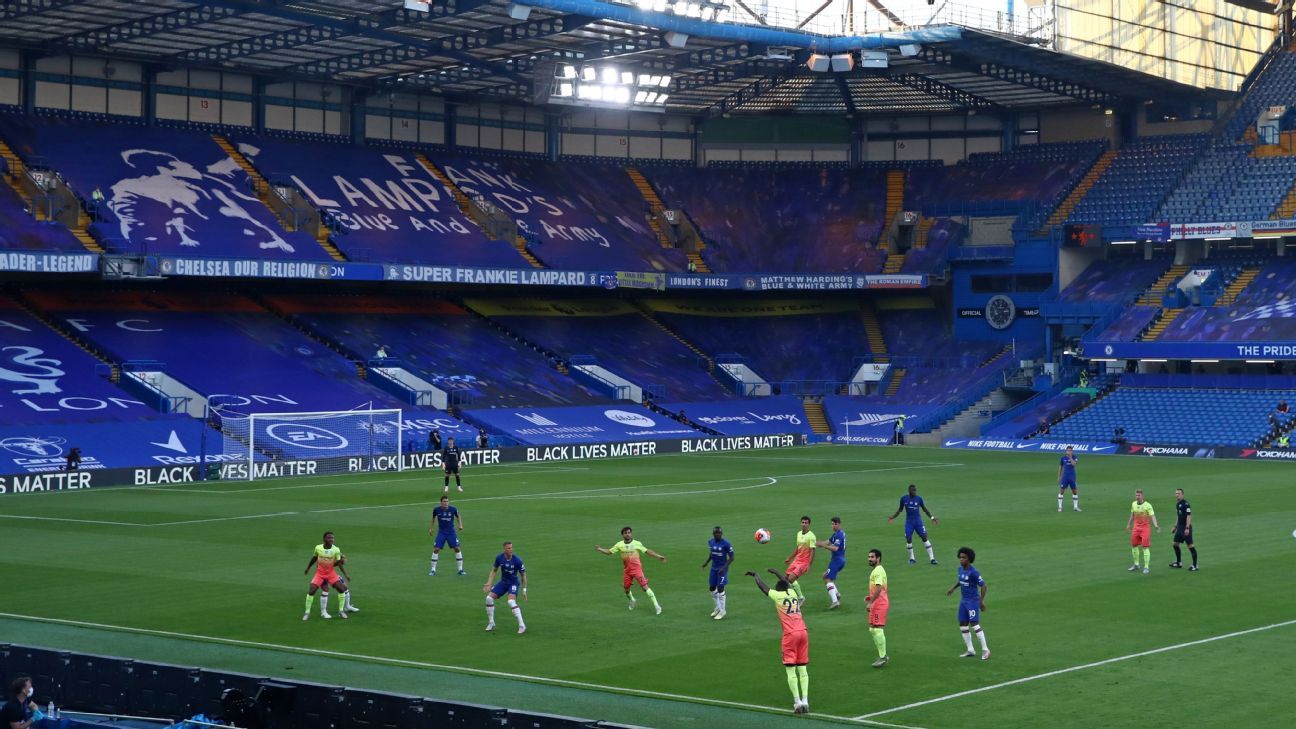 It’s not just the support Richarlison misses but the adulation. “We are used to having fans shouting, asking for pictures, singing our songs,” the Everton forward told ESPN Brasil. “It is a little weird, but we have to get used to this. [Hopefully] we can go through all this soon so that the fans can come [to the matches].”

Welcome to the Premier League in 2020. More specifically, welcome to the coda to a 2019-20 campaign split in two by the coronavirus pandemic and irrevocably shaped upon its return by the absence of fans across all 20 top-flight stadiums.

The scenes outside Anfield on Thursday, as Liverpool clinched their first League title in 30 years, provided a brief snapshot of the passion subtracted from the matchday spectacle as health and safety precautions take priority. Fans at least have the option to watch every game on television with artificial crowd noise, but there is no hiding from football’s new reality for the players. Most clubs have opted to go through the pomp and pageantry of their prematch buildup, with the big-screen action shots and deafening soundtrack ringing hollow across seats adorned with material versions of season-ticket holders and poignant tributes to NHS staff.

Manchester City goalkeeper Ederson has no doubt that though the game is diminished, keeping fans away is the right course of action while people still lose their lives to COVID-19 on a daily basis.

“It feels good to be able to come back, but I had never experienced that before,” he told ESPN Brasil. “The match itself and the whole environment feels different. It is not the same as playing with a packed stadium.

“However, in the moment that we live, that would not be appropriate. I found the feeling of playing without fans and playing the way we played very different [from the usual] with all the precautions we took before the match, too.”

Temperature checks, elbow bumps, disinfected footballs and sanitised goal frames are all part of the new normal. The prematch handshake has been abolished in favour of two sets of players walking out from two different entrances and taking a knee in support of Black Lives Matter.

The games have so far not followed the pattern of other returning European leagues, in particular the German Bundesliga, in which visiting teams have enjoyed a distinct advantage. Of the 22 Premier League games played to date, 10 have ended in home wins, with six draws and six away victories. That doesn’t mean players haven’t noticed changes, even on their own ground.

“It doesn’t have the same feeling, of course,” Chelsea striker Olivier Giroud told ESPN. “It is really strange at first, and then you try to get used to it. It has less charm to play with no fans. Also, the pitch feels much bigger with no fans in the stadium! It is crazy to say because it is the same pitch, but it does feel bigger! The bearings and points of reference are not the same.

“And at least the managers are happy because now we can hear easily everything they tell us, even when they don’t shout!”

One intriguing benefit of a near-empty stadium is the chance to hear in-game messages and interactions among players, moments usually drowned out by the cacophony. Manchester United coach Michael Carrick cited his awareness that cameras could pick up specific instructions from the bench, but Ole Gunnar Solskjaer is by nature a manager who remains stationary in the dugout for long periods, allowing his team to implement pregame plans. Carrick believes old habits won’t change even in this uncharted time.

“You’re that close to the other dugout anyway that if anything, you’ve got to shout louder for the players to hear you,” Carrick said.

“If you have to do that, someone on the other bench is going to hear you anyway. Maybe you have to be careful a little because it’s quiet, and the cameras will pick it up, but I have to say, it isn’t something that I’ve thought about.

“Yes, you want to get messages [to the players], but I don’t want to be screaming at the lads for the whole game. It isn’t something we normally do. You’ve got to trust the lads to play the game.

Stewart Robson breaks down why Alexandre Lacazette and Mesut Ozil are representative of Arsenal’s problems.

United had some experience with lacking atmosphere prior to the lockdown after their Europa League last-16, first-leg tie against LASK Linz in Austria was played behind closed doors on March 12. Speaking after United’s 1-1 draw at Tottenham — which, perhaps aside from Chelsea vs. Manchester City, stands as the highest-quality Premier League game under these circumstances to date — Carrick said: “We had a bit of an experience of it before. And actually, when you are in it, yes, the emotion of the fans in the stadium is missing, but your business head goes on.

“We’re there to do a job, so that takes over in some ways. It was a little bit strange when it comes to the decisions you make on the work side. It is what it is. It is still a game of football.

“I thought it was a real game at Spurs. I don’t know if it came through, but on the touchline, there was a real intensity to the game. It was played properly. It didn’t feel like a friendly, possibly because it was two big teams going at it with a lot at stake. Credit to both teams because it is not easy to go from almost nothing to that level. It shows how well they’ve applied themselves during the lockdown, keeping themselves fit and a base where you can go ‘bang’ and up the level.

“We expected mistakes. We expected things not to be perfect. Every team will probably say the same. Supporters will understand there’s going to be an element of that for the first game or so until the boys get up to speed.”

United have, in fact, been one of the most impressive sides since the restart, responding strongly in falling behind at Spurs before sweeping Sheffield United aside at Old Trafford. Defender Harry Maguire’s view appears informed by that renewed confidence. “Maybe it does take away the home fans making the atmosphere uncomfortable for the away team, but it’s still about the 11 players who turn up on the day,” he told ESPN.

“There is enough talent in our squad to go and beat anyone. We’re fully focused on ourselves and are not looking at it being home or away. We’re just seeing every game as a chance to try to get the three points and perform at our best.”

Steve Nicol says Liverpool’s current side are as good as any that’ve ever played.

The absence of supporters might yet have a liberating effect on those teams battling relegation, although none of the bottom five has won a game since the restart, and some, including Arsenal, have struggled with injuries.

“When you live without training for a long time, you end up losing that habit,” said Ederson, who lost City teammate Sergio Aguero to a season-ending knee injury against Burnley. “It is difficult to resume things, even if you have some time to prepare. It is difficult to acquire that rhythm again. Many injuries end up happening.”

Burnley are a point behind Arsenal in 11th place after recovering from that 5-0 mauling at Man City with a 1-0 win against Watford. Fears during the planning stage that matches would lack intensity have so far proved largely unfounded, but there remains a concern that when the novelty subsides and the outstanding issues throughout the league are resolved, a postseason feel could prematurely permeate many matches.

“I’d be lying if I said it was normal and everything was fine because football is all about playing in front of fans and being driven on by the atmosphere,” he told ESPN. “They do have an effect on the games.

“But we have been very strict and regimented in our focus in terms of what we needed to do. It’s something that we [are] going to have to get used to, though, because it’s going to be here until the end of the season at least.”