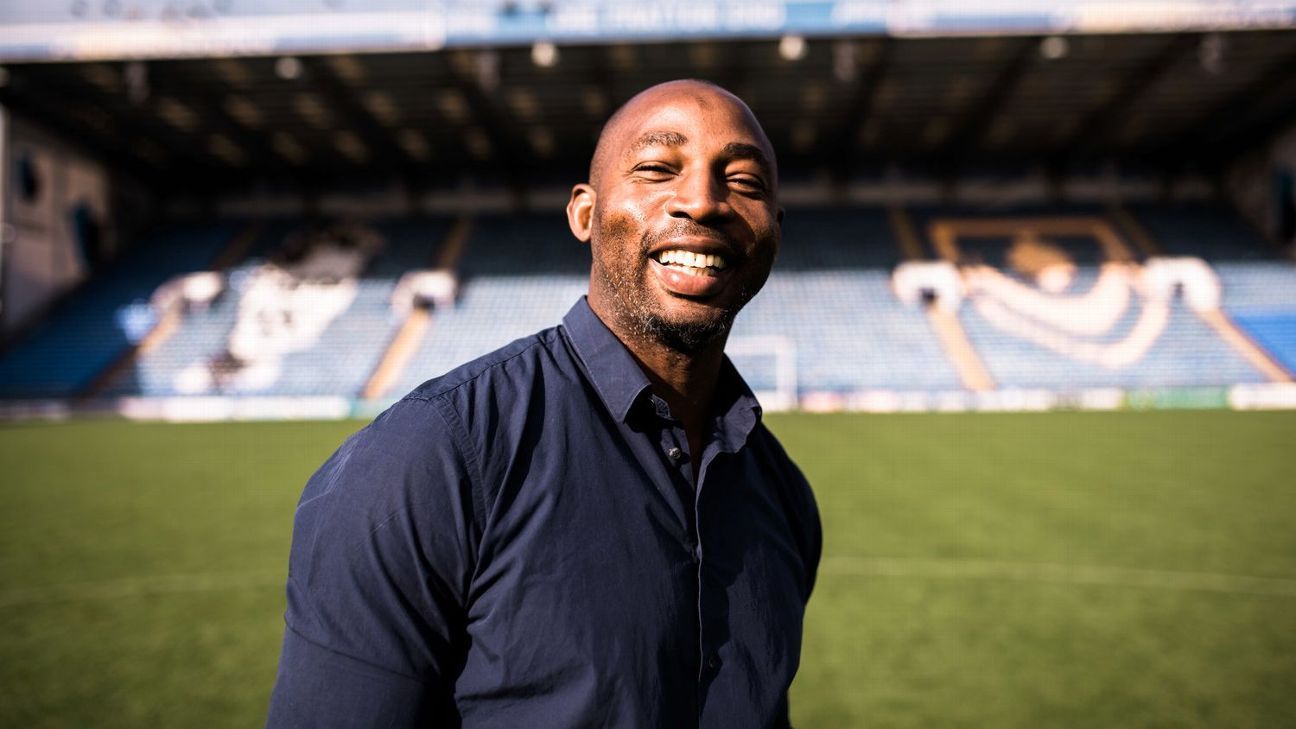 
One well-intentioned text message changed Vincent Pericard’s life, inadvertently triggering a sequence of events that led to a series of self-destructive actions and thoughts.

In the space of four years, the footballer went from training with Zinedine Zidane and playing against Thierry Henry to sitting in his apartment looking at a bottle of pills, wondering if anyone would care if he ever woke up.

Football had eaten him up and spit him out. A dismal run of injuries married with self-doubt turned him from a man once billed as football’s first potential billion-dollar player, with Edgar Davids as his mentor, to someone struggling in the lower leagues of English football with mounting debt and self-destructive tendencies.

We talked over the course of 18 months, and now Pericard wants you to learn from his cautionary tale.

“I want my story to mean that having potential, having the talent is not a given,” Pericard told ESPN. “It can be taken away just as quickly because of mental health. Players should look beyond their physical capabilities as their mental health is equally as important.

“I am the prime example of how that can go wrong if you don’t look after your mental health.”

Pericard made his debut for Juventus in 2002 against Arsenal; it was a much-hyped unveiling of a player who’d already had a documentary made about him called “The Man Who Will Be Worth Billions.”

He was 18 years old at the time; a rangy striker with blistering pace who had caught the eye of Juventus manager Marcello Lippi, who signed him from Saint-Etienne. When he joined he couldn’t speak Italian — it was all very new. But he adjusted. He was young and impressionable back then; it was all part of living the dream.

“One of my fondest memories was of my first training session,” Pericard recalled. “We played five-a-side and Zidane drilled past me like he could fly. I didn’t realise what had hit me.”

Davids, the legendary Dutch midfielder, exchanged numbers with him, telling him to get in contact if he needed anything. He remembers sharing jokes with Gianluigi Buffon. It was his new normal.

He was in his second year at the Serie A giants when he made his debut for the first team, having already scorched through reserve football, finishing top scorer twice in as many seasons. That debut appearance came as a substitute against Arsenal in the Champions League in March 2002. He was up against Thierry Henry and Patrick Vieira. He remembers flooring Vieira early on, and getting a mouthful back, and how he kept his shirt at the end of the match. It was to be the first of many on his journey at the highest level.

Then came the text message that kick-started the self-destructive spiral.

He and two friends at Juventus decided to head out for a drink. They invited their Italian teacher to join. Pericard sent her the message. It was innocent, void of any agenda. Five minutes later, Pericard’s phone rang with a call from one of Juventus’ directors, demanding to know why they had invited his girlfriend out for drinks.

Soon after, all three players had been sent out on loan, with Pericard landing at Portsmouth, then in the second tier of English football.

It was another move to a new, foreign country and the transition brought anxiety. But he hit the ground running, slotted straight into the side and helped them to promotion. Despite Juventus wanting him to return, he signed a three-year deal with Portsmouth, having learnt to love life on the south coast of England and the club’s ascendancy to the Premier League.

Then the injuries started.

He suffered four quadriceps tears, and tore his ACL. “When I tore it [the quad] the first time, it was a case of, ‘OK, that’s happened, now to recover’,” Pericard said. “But then a week after, it broke down again and happened three times in a row, and that was when I started getting frustrated and started losing faith in my body. I couldn’t keep up. That was when people started losing faith in me, and my family was getting worried, and it made me question what was going on. It triggered a vicious cycle.”

He joined Stoke in 2006 but struggled to adapt to their long-ball football. Fans and journalists criticised him and it got to him. He started to make poor life choices; he drank too much and womanised. Then came a spell in jail in August 2007 for perverting the course of justice — after Pericard was caught speeding, his father-in-law originally took the blame, but then confessed he wasn’t in the car, and Pericard was sent to prison for four months.

Those closest to him, such as Stoke teammate Mamady Sidibe, could see something wasn’t quite right with Pericard, but put it down to poor luck with injuries.

“The problem with Vincent was I didn’t know he was depressed until he retired,” Sidibe told ESPN. “That’s when I found out. Things were not going well for him. He had a lot of injuries and he was not playing as much as he wanted.

“I knew he wasn’t happy. I never thought it was struggling with depression, though.”

All the while, Pericard went through daily turmoil just to get him through the training-ground gates.

“I couldn’t seem to find a way out,” Pericard said. “You start feeling worthless, you start feeling like you’re not useful to anyone, to my family, to my clubs, so why do I even bother today? Why do you bother going to training? So, you call in sick and stay at home. And after a while you start thinking, why do I even bother living, as I’m not bringing anything. Those thoughts crossed my mind and I realised things were serious.

“That’s what really gave me a big kick to seek solutions. That was not me. I believe in resilience, but the fact I was thinking that meant I needed help.

“I could no longer do it by myself.”

Stoke City had appointed a sports psychologist, one of the first English clubs to do so. Pericard began to sort out his mind, but his body still let him down. Having lost form and stamina, he was released by Stoke in the summer of 2009, signed a short-term deal with Carlisle United, then went to Swindon and lived a nomadic existence until he eventually retired in February 2012.

“For a player to give up something they loved was hard,” Pericard said. “But it was time to do something else. As soon as I admitted that to myself, I felt the most amazing relief.

“All the pressure and expectation went away. But that said, I had to figure out a transition. It took two years to figure it out.”

We first met in person back in January 2019. Back then, before everything had to be done remotely due to the coronavirus pandemic, Pericard was midway through his graduate training program at BT. He had a team; it was evident how happy he was as he bounded down the stairs at his Central London office, a few grey specks in the stubble, with this welcoming grin. He was comfortable in his own skin.

By this time, he had already tried his hand at running his own business. First he started a company called Elite Wealth Management, looking to help foreign players settle in the U.K. It had early interest from Premier League clubs, but by his own admission, it was too ambitious, and rather than letting it run away from him, he decided to park the business and headed to university.

A degree and a master’s later, and Elite Wealth Management morphed into an app called WhatsUp?. It is a mobile app geared around mental health awareness, where users remain anonymous but are connected with councillors. Every day they register how they’re feeling. It has 1,000 users at Portsmouth University, and the company is looking at expanding into other sectors.

“Without going into too many details, we have had several cases where it has helped students stop taking drastic action like committing suicide,” Pericard said. “The app came about from my experience in football. It was a pressured environment with short-term contracts and it’s impossible to share how you are feeling.

“You can’t just say, ‘Gaffer, I’m not OK today,’ because the minute you do that, you become perceived as a liability by your teammates, manager and chairman. This has massive implications, [either] financial, or [in terms of] contract extension.”

The app takes away the pressure of dialling a number and verbally talking through how you are feeling; sometimes a cry for help is easiest by typing a few words.

He is agitated about where he feels football is still falling short on mental health. He admires the work the Professional Footballers’ Association is doing with its 24-hour telephone counselling service and the National Counsellor Network featuring over 100 experts, but still wants a stakeholder to grab hold of the issue and bring in processes and pathways. Pericard takes heart from players such as Danny Rose and his former Juventus teammate Buffon, who have spoken about their mental health, and said he is pleased with the various initiatives popping up around football, but is concerned there will still be others who are keeping quiet.

He encourages anyone and everyone to talk about their feelings and be honest about their mental health. “I’m trying to use my past to convey a positive message — education, mental health and business,” Pericard said. He feels that if he had had the support that is available now, his career would have finished in a more complete way, with his potential, ideally, fulfilled.

We contacted Lippi, who gave Pericard his Champions League debut back in 2002. He sent this message back: “Any player who joins Juventus has moral and technical virtues of the highest level. Then, if it doesn’t work out, that can depend on many things. I remember Pericard well but I haven’t followed him closely since. I hope he has resolved his issues and I send him well wishes from the bottom of my heart.” Pericard laughed, a little embarrassed by Lippi’s words. “That’s so kind,” he said.

He paused, as if to close that chapter. “That feels like another lifetime,” he added. “I should embrace my football career, even though it didn’t go the way I wanted it to.” He then smiled and finished our Zoom interview, as he had a client to talk to.

He will graduate from the trainee program in September, and memories flash back to when he stood in awe as Zidane flew past him.