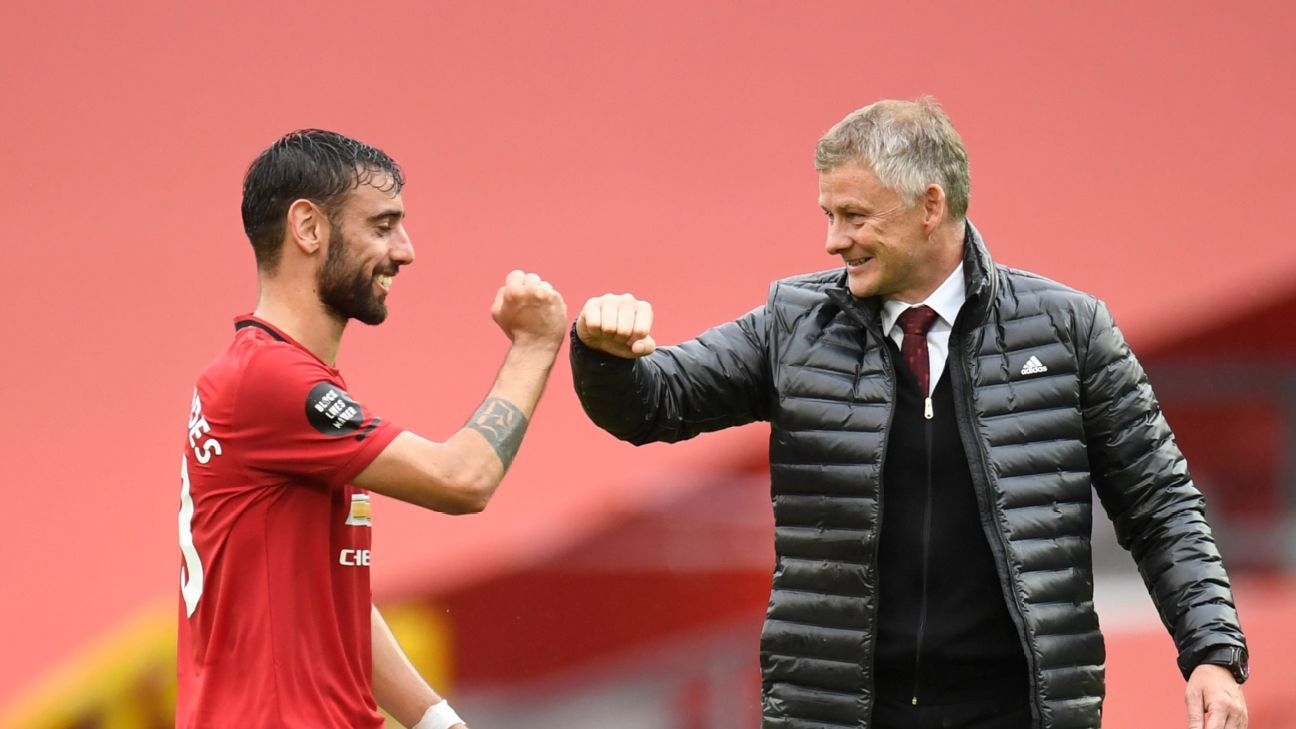 
Liverpool made one of the easiest title runs in the history of the Premier League, clinching the title with seven of 38 matches remaining. They finished the season with 99 points in league play, second-most ever, and fully 33 points above third-place Manchester United. Does that level of dominance portend a run of titles, or will the league race be a much more competitive affair next time around? Probably the latter.

This week we will look at each of next season’s most likely Premier League contenders, their biggest strengths and weaknesses moving forward and what they must do to rise to the top of the league.

Earlier this week we looked at Manchester City and Chelsea. Now it is Man United’s turn.

On Jan. 29, Manchester United were in fifth place in the Premier League, six points behind fourth-place Chelsea and 14 behind third-place Leicester City. Then it happened: the seemingly perfect transfer. Bruno Fernandes, who tallied 32 goals and 18 assists with Sporting CP in 2018-19, and had long been rumored a United target, came aboard for €55 million (plus up to €25m in add-ons). And poof, United had the identity it had severely lacked.

Good news: United were top of the table after January

In the final 14 league matches of 2019-20, United didn’t lose, winning nine and drawing five. They scored the second-most goals (30) and allowed the fewest (7). Star midfielder Paul Pogba returned from injury after the coronavirus stoppage, and things kept humming. They earned the most points in the league after the start of February, catching not only Chelsea but also Leicester City to finish third. They did lose to Chelsea in the FA Cup semifinals, but they advanced past Club Brugge in the Europa League round of 32 by an aggregate score of 7-1, then crushed Austrian outfit LASK 5-0 in the first leg of the round of 16 (their second leg is Aug. 5).

We’ve been waiting for a few years for United to show true signs of life. Since Sir Alex Ferguson’s retirement in 2013, they had enjoyed only one top-three finish, compared to four finishes of fifth or worse. After ripping off 10 wins and two draws in their first 12 matches after Ole Gunnar Solskjaer’s appointment in Dec. 2018, they managed just 42 points in their next 33 league matches, a definitively Everton-esque pace. But then came February.

With Fernandes now in an attacking midfield role, Marcus Rashford and 18-year-old Mason Greenwood on either side of him, and Anthony Martial up front, United both controlled more of the ball and created better shots. They went from averaging 5.3 passes per possession to 6.2 and from 0.12 xG per shot to 0.13. That might not sound like a lot, but almost every team in Europe’s big five leagues fall between 0.10 and 0.14, so it’s a worthy rise.

Fernandes took 67 shots, 30 more than anyone else, averaged 0.14 xG/shot, and also helped to create high-quality opportunities for Martial (0.15) and Rashford (0.20). Add to that a torrid stretch by Greenwood (six goals despite 0.08 xG per shot), and you had, among other things, a situation in which Pogba didn’t have to do as much.

With Fernandes et al., United tilted the field in its favour without overcommitting Pogba and other midfielders like Fred, Nemanja Matic and Scott McTominay. That created another benefit: United became a better defensive team. Since the start of February, opponents averaged just 0.10 xG per shot and scored 0.5 goals per match, each the lowest in the league. United weren’t incredibly disruptive, but they were deftly organized and gave you little to work with.

Here are the destinations of Pogba’s passes from 2016 to Fernandes’ arrival:

And here are the destinations since:

Adding Fernandes both gave United an identity and clarified a lot of players’ roles. You can’t ask for more than that — you can only hope it continues over a full season. So, about that.

As good as United have looked, we’re reacting to a 14-game league sample. That’s barely larger than the brilliant Solskjaer debut stretch, which turned out to be, to some degree, fool’s gold. And a lot of regression factors were a little too far in United’s favour during their most recent hot streak.

Save percentage: During these 14 matches, United’s save percentage was 83.3%: 42 shots-on-goal against, 35 saves. Keeper David De Gea has had some shaky moments here and there, but that’s an outstanding rate. Too outstanding, actually. Over the past four years, only 11 Big Five teams have hit even 77% for the season. Those 11 either a) had Jan Oblak as their goalkeeper (Atletico Madrid three times) or b) saw their save percentage fall the next season, often by a large margin.

Penalties: Over the past 10 Premier League seasons, only eight teams have earned more than 10 penalties in a single season. No one had earned 14 until United did it this year. Granted, United drew 12 last season, too, but the other teams with 11+ penalties drawn averaged just 5.8 the next year. This record total is probably going down, too, no matter what Premier League fans tend to think about United’s … relationship with the referees and VAR.

Set pieces: Set-piece goals are pretty random, even if you’re good at them (or bad at stopping them). Over their first 24 league matches, United scored five set-piece goals and allowed 11, a margin of -0.25 per match. In contrast, over the last 14, they scored four and allowed one, a margin of 0.21. Fernandes is pretty good on corners and free kicks, but this flip probably won’t last.

Expected goal differentials stem from a tough-to-separate combination of randomness and talent. Good finishers almost always end up with goal totals superior to xG totals. It’s rational for proven finishers like Martial, Fernandes and Rashford to end up on the right side of this equation, and sure enough, they produced 20 goals to 15.5 xG over these 14 matches.

Greenwood pushed them over the top, however. In all competitive matches this season, he scored 17 goals on just 8.9 xG; after the Fernandes addition, he scored six league goals on just 1.8 xG. Even if he turns out to be one of the best finishers of his generation, that ratio is going to come down. Over the last five seasons, Lionel Messi‘s goals total was about 27% higher than his xG; Greenwood’s was 90% higher this year. And if his goal-scoring numbers regress to a merely good level, so do United’s.

How important was Greenwood’s overachievement?

Predictive stats don’t think there was too much of a difference between old United and new United, even if the point totals told a different tale.

United’s not a finished product yet, in other words. But they know that. They wouldn’t be trying to shell out massive cash for Jadon Sancho at the moment if they didn’t. But they do enter the offseason with far fewer obvious needs than they’ve had in a while. Sancho aside — and to be sure, the 20-year-old Borussia Dortmund and England star would be an absolutely devastating addition next to Fernandes (though it might require Solskjaer to bring back the old 2-3-5 formation to get all of his attackers on the field) — United will have more than enough star power.

With the injuries we saw both Manchester City and Chelsea work through at centre-back this season, and the tribulations that they occasionally caused, adding another centre-half to potentially fill in for Harry Maguire or Victor Lindelof would make sense, as would bringing in a fourth full-back to go with Aaron Wan-Bissaka on the right and Luke Shaw and Brandon Williams on the left. Eric Bailly remains a solid backup option in both roles, but thanks in part to next season’s Champions League windfall, United again has plenty of money to spend.