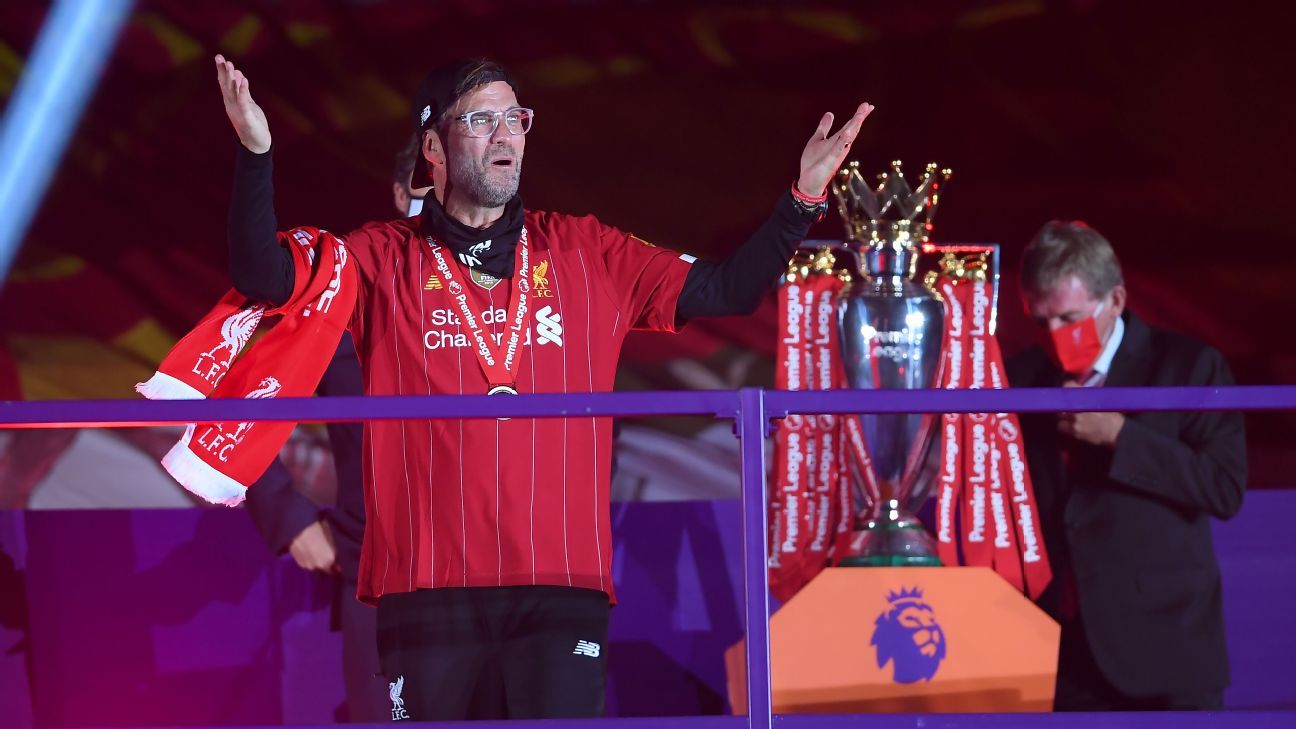 
Liverpool made one of the easiest title runs in the history of the Premier League, clinching the title with seven of 38 matches remaining. They finished the season with 99 points in league play, second-most ever after Manchester City, who finished 18 points behind the Reds in second place this year. Does that level of dominance portend a run of titles for Jurgen Klopp’s Liverpool, or will the league race be a much more competitive affair next year? Probably the latter.

This week, we’ve looked at each of next year’s most likely Premier League contenders, their biggest strengths and weaknesses moving forward, and what they must do to rise to the top of the league. We finish with a look at how the champs themselves, simultaneous holders of domestic (Premier League), continental (Champions League) and world titles (FIFA Club World Cup), can stay on top.

Liverpool’s building job under Klopp was a strangely linear story. They needed to improve in Area A — stretching packed-in defenses or guarding against counter-attacks or closing out tight games — so they did so. They needed to add Final Piece B — a prolific winger such as Mo Salah, a physical, strong-passing central defender such as Virgil van Dijk, an ace goalkeeper such as Alisson — and they nailed it. They improved a little in Klopp’s incomplete first season, then improved a lot, then improved a lot more and so on.

Better yet, of the 12 players who logged at least 1,400 minutes in league play, none are older than 30. Whereas some championship clubs hold on to the past and age out of their prime, Liverpool isn’t in danger of doing that for at least another year or two.

That said, they’re going to have a lot of decisions to make in a couple of years — van Dijk, wingers Salah and Sadio Mane, forward Roberto Firmino and midfielders Jordan Henderson and Georginio Wijnaldum are all between 28 and 30 years old. But if they want a victory lap, or their iffy transfer budget just makes it seem like they do, they might get away with it.

Bad news: Regression catches up to you

So do hangovers, and you can make a pretty compelling case that Liverpool’s hangover already started.

In the last month before the coronavirus stoppage, Liverpool lost more matches than they did in the previous 13 months combined. They eked out wins over Norwich City and West Ham United with late goals, got rocked by Watford, then lost 2-0 to Chelsea in the FA Cup three days later. They also lost 1-0 and 3-2 to Atletico Madrid in the Champions League round of 16.

After the stoppage, they averaged a solid, but not title-worthy, 1.9 points per match. Klopp opened up the squad rotation a bit with the title in the bag, but the utterly torrid form of last fall didn’t reappear, and as we saw from the end of Klopp’s time at Borussia Dortmund, it’s hard to get sixth gear back when you lose it. (We also saw Bayern and other rich clubs buy away all of BVB’s best players, and that doesn’t appear to be a danger this time around.)

General hangover concerns aside, there was one area in which Liverpool was unsustainably good: close games. This is a massive regression-to-the-mean category; it’s really difficult to be excellent, or terrible, in this area every year.

In 18 league matches decided by zero or one goals, Liverpool won 14, drew three and lost only one. That’s 2.5 points per close match. Over the past 10 years in Europe’s big five leagues, only Juventus, with 2.67 in 2013-14, have topped that average. And after that leap, they averaged 1.83 and 1.85 the next two seasons. Overall, each of the 13 Big Five teams to top 2.1 points per close match in a given year saw that average fall the next.

Regression always finds you. Just ask Manchester City, who went from averaging 2.13 and 2.07 points per close match during their back-to-back title wins to 1.5 this year. If both Liverpool and City had averaged 2.0 instead — and I’ll pause to let you think back to all those late Liverpool goals that turned draws into wins — Liverpool’s 18-point lead in the table would have become a two-point grapple.

This is not to say that luck won Liverpool the title, but this part of the championship recipe is almost impossible to duplicate.

Even with some close-games fortune, this was a dynamite team, and while soccer may be a weakest-link game, as Chris Anderson and David Sally put it in 2013’s “The Numbers Game: Why Everything You Know About Football Is Wrong,” pinpointing a weak link is awfully hard.

The Reds weren’t quite as good at finishing as they could have been: Mane, Salah and Firmino produced 53.2 XG but only 46 actual goals, mostly due to a shaky run from Firmino. This might explain why they were interested in RB Leipzig‘s Timo Werner for so long before he signed with Chelsea. But Firmino has been perfectly decent in the finishing department before this season (2015-16 through 2018-19: 42.9 XG, 48 goals), so that was probably more of a blip than a quality issue.

Their opponents’ shot quality was a little too good: The Reds allowed 0.127 XG per shot, which ranked just 11th in the Premier League. Possession-heavy teams tend to be vulnerable to counter-attacks, and therefore higher shot quality, but the fact that opponents turned 43.5 XG into only 33 goals suggests their defensive output was maybe a little better than it should have been.

Combined with the fact that van Dijk played in all 38 matches this year, and it’s really hard to count on that happening every season, maybe that suggests a potential need to upgrade or add to depth in central defense. (Then again, van Dijk’s main counterpart, Joe Gomez, is only 23 and should continue to improve.)

Could their midfield passing improve? Klopp has, through the years, come up with a fascinating way of opening up park-the-bus defenses and making it harder for opponents to counter. He has, in a sense, flipped the pitch inside out, turning central midfielders into defenders and fullbacks into attacking midfielders. Fullbacks Trent Alexander-Arnold and Andy Robertson led the team with a combined 25 assists in league play, and wingers Salah and Mane combined for 17 more.

Liverpool worked from outside in while maintaining a sturdy, conservative base in midfield, where Jordan Henderson led the way with just five assists. For comparison, this was almost the exact opposite of Manchester City, which got 30 combined assists from midfielders Kevin De Bruyne and David Silva, 10 from wingers Riyad Mahrez and Raheem Sterling and six from fullbacks Kyle Walker and Benjamin Mendy.

If we’re looking at ways to improve Liverpool, however, wouldn’t it be possible to fit in a few more incisive passes from midfield while maintaining said sturdy base?

Liverpool’s apparent interest in Bayern Munich‘s Thiago this offseason has been a source of confusion for some. The club did such an incredible job of acquiring players for their peak years, so what sense would it make to go after a 29-year old whose injury history is lengthy enough to require a full second page on his Transfermarkt profile? Why add to what is already going to be pretty significant roster churn two or three years from now?

Relying too heavily on transfer rumors can make you insane, not to mention wrong about 99% of the time, but let’s just say that if the interest in Thiago is real, I get it. There might not be a better possession man in soccer, and midfielders of his statistical profile — elite pass completion rates in and out of the attacking third, plus elite take-on and duel success rates — tend to be either veterans (Real Madrid‘s Toni Kroos) or cost-prohibitive youngsters (new Juventus acquisition Arthur).

If your best, or only, way to improve in the present is to replace someone such as Wijnaldum or Fabinho with a more accurate pivot, then you at least look into it.