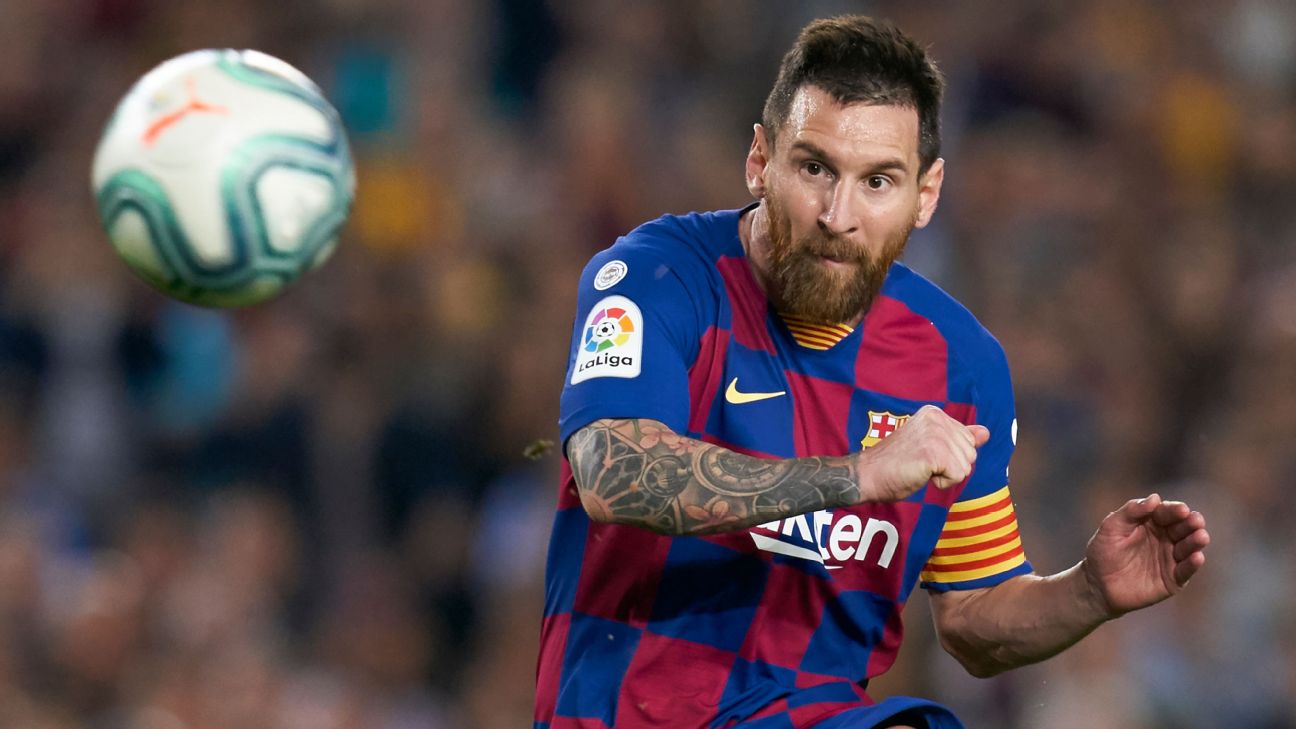 
Science tells us that nature abhors a vacuum and will always rush to fill it. Perhaps that’s why as soon as the eternal Cristiano Ronaldo vs. Lionel Messi head-to-head withered away when CR7 left Spain, Sergio Ramos stepped up to the plate?

Right now we are witnessing a kind of dead-ball shootout between someone who’s developing into one of the greatest-ever free-kick takers and Ramos, who’s suddenly become an assassin from the penalty spot.

Messi is a metronome. The vogue phrase these days is that a free kick from anywhere up to 30 metres away from the goal is “like a penalty to him.” Fair enough, too. Meanwhile Ramos has developed an eccentric but specialised technique from 12 yards out, slotting his last 16 of 16 spot-kicks for club and country and notching nine from the spot so far in the 2019/20 season despite gifting away at least two penalty opportunities to Karim Benzema.

It’s a dead-ball exhibition contest of immense proportions. The Argentinian rattles home a couple of free-kick goals across two or three games and the defender from Andalusia will answer with one “Panenka” penalty after another, lofted haughtily and nervelessly over despairing keepers to the tune of “anything you can do, I can do better…!” (It’s kind of a special move for him.)

Neither man is the all-time standard for their respective art. Not yet. Messi, for example, hasn’t yet overtaken Cristiano Ronaldo (that’s imminent) and can only dream of the totals Juninho Pernambucano, Zico, Pele, David Beckham and Ronaldinho scored. For the moment at least. But he and Ramos are on extraordinarily rich seams of nerveless form. They are turning their cold-blooded conversion of these opportunities, the kind that can make other players quake and that can expose the moments when ambition greatly outstrips ability, into match-winning assets.

For Ramos and Messi, their current excellence can be regarded as something of a “second summer.” For example, it wasn’t until exactly four years after his competitive debut for Barcelona that Messi scored his first direct free kick, against Atleti in a 6-1 win during Pep Guardiola’s treble-winning season.

Do you recall it? It was an extraordinary way to open a free-kick account but was typical Messi. It’s October 2008, Atleti are already 2-0 down in the eighth minute and Messi is fouled well outside the box. Los Rojiblancos not only argue the toss with referee Iturralde Gonzalez, but Raul Garcia stands about 3  feet from the ball so that it can’t be taken quickly. Yeah right.

Over the ball are Xavi, the referee and Messi. Messi gives Iturralde a little nudge to get out of the way, asks him “can I take this” and the ref says “yes.” Xavi, realising what the little imp is up to, just edges out of Messi’s path and with Atleti keeper Gregory Coupet fooled by the fact that Raul Garcia seems to be standing too close to the ball either for play to start or for Barça to be able to imagine scoring, is standing at his left-hand post trying to organise their wall.

Messi scuds the ball into a 99% open net. It’s the same kind of “find the dope” moment that Messi and Barcelona will suffer from years later, at Anfield last season, when Trent Alexander-Arnold caught them taking a breather at the corner from which Divock Origi scored the winner in the Champions League semifinal. Anyway, back to 2008: Atleti were outraged, the ref told them that it was their own fault for protesting and standing over the ball, he claimed to have blown his whistle and the goal stood.

By February 2012, again against Atleti and nearly eight years after his debut, Messi had hit the unremarkable total of five goals from direct free kicks. In other words, he’s 24 years old, a treble Champions League winner, garlanded by Ballons d’Or and regarded as truly exceptional, but not notably either a regular free-kick taker or scorer. Fast-forward to Saturday and the brace of stunning goals Messi hit, with insouciant ease on a night when he wasn’t playing particularly well, from huge range against Celta Vigo. They meant Messi has now scored 52 times for club and country from free kicks, a remarkable acceleration into what is, now, not just admirable but awesome.

What about “Planet Ramos?” Given his unerring, unforgiving aptitude from the spot, the fact that he’s scored 125 senior goals for club and country plus the fact that he’s converted a grand total of nine spot kicks in this calendar year alone, it might surprise you to know that it was only last year, February 2018, that this uber-confident, buccaneering Madridista was tucking away only his second successful La Liga penalty.

Mad, right? These days he’d kidney-punch a teammate who tried to take the ball off him once the ref’s pointed to the spot. And then, without fail, he’d take five or six steps back, a couple of long strides towards the ball, drag the toe of his right boot along the grass and then, most likely, dink the ball over the diving, despairing frame of a 6-foot-2 keeper.

Like Messi, Ramos made his senior debut in 2004, for Sevilla, but didn’t slot his first competitive penalty for nearly seven years. The reason behind that wasn’t him being scarred by a horrible miss in the Confederations Cup final of 2013, when Brazil were monstering Spain in Rio, dragging the ball wide of Julio Cesar’s goal (et tu, Sergio!). It even had nothing to do with the horrors of the 2012 Champions League semifinal when, at 2-1 down in the shoot-out against Bayern Munich, he skied his effort dreadfully so that the next conversion, by Bastian Schweinsteiger, was the winner.

Not at all. Part of Ramos’ ferocious need to take, and score, penalties right now has to do with the impatient wait he’s endured to get rid of all his spot-kick rivals. Since Ramos joined Madrid in 2005, his coaches have preferred Ronaldo, Roberto Carlos, Zinedine Zidane, Robinho, Raul, Gonzalo Higuain, Kaka, Xabi Alonso, Emmanuel Adebayor, Karim Benzema, Angel Di Maria, Gareth Bale and Cristiano Ronaldo over him. When he converted just his second Madrid penalty last year, it was because Ronaldo was rested away to Leganes; not until the Portuguese left the club and Ramos, as captain, permanently took over penalty duty did his extraordinary current form become such a weapon for Los Blancos.

And my, what they’ve been missing!

Occasionally, if Madrid get a second penalty just after Ramos has scored, he’ll cede to Benzema — not necessarily out of friendship, but with the objective of keeping the goalkeeper guessing and trying to ensure that the win, and three points, is more assured. But last week, when Rodrygo erupted with two goals in seven minutes against Galatasaray and a penalty was awarded, we saw the hard “it’s my turn and nobody’s taking it away from me” side of Madrid’s captain.

Some parts of the crowd chanted for Rodrygo as they yearned to see an 18-year-old kid on his Champions League home debut score a hat trick in record-breaking time. As Ramos was putting the ball on the spot, Marcelo trotted up to him and, I’ll bet, put in a word for his junior countryman. Ramos expelled him from the penalty box. Then, when Ramos scored, he pointed to the back of his shirt, Ronaldo-style, as if to say: “I’m as good at this as he was.” The Madrid captain’s face was a stone mask, no joy.

My interpretation is that Ramos didn’t like the Bernabeu chanting for some upstart kid who’s been at the club for the blink of an eye and forgetting that he, “Don Sergio,” has had to wait for the 12-yard spotlight to fall on him. Now he’s centre stage and intends to stay there.

Messi’s case is a little similar. During his reign as Barcelona’s greatest-ever player, he’s also had to wait his turn. Initially it was Xavi and Rafa Marquez from dead balls: free kicks were their territory. Then Andres Iniesta and Thierry Henry would pop up occasionally. However, like Ramos, Messi knew he wasn’t a natural killer from dead ball situations. Like Ramos with his penalties, he thought long and hard about how to score relentlessly. Good as he was, Barcelona’s No10 needed to master his technique.

Practise is the cornerstone, but Messi concedes that he initially didn’t strike free kicks powerfully enough. His coach with Argentina from 2006 to ’08, Alfio Basile, used to dig him out that it was “like he was crossing the ball into the keeper’s hands.” Diego Maradona, also Argentina coach, advised him about precisely where on the ball to make contact, Messi studied Juan Roman Riquelme’s technique and also worked hard in training. Now it’s as natural as breathing. He’s astonishing.

Of course both Ramos and Messi dabble in each other’s art. Messi’s taken 112 penalties in senior football, scoring 87. Sometimes it looks as natural as Ramos’ technique, a guaranteed goal. Sometimes he seems unsure, nervous. He once told me, after scoring a big penalty against Milan in the Champions League back in 2012, that as he was about to take it all he could think about was how big, agile and athletic Christian Abbiati was, how he seemed to fill the goal. The power of the mind, whether it’s in a good mood or messing with you, is everything in that situation.

One penalty stat for Messi I find interesting is that he’s never lost a Liga or Champions League game during which he’s failed from the penalty spot, usually adding a goal, goals or a goal assist having fluffed. That said, hitting the crossbar from 11 metres against Chelsea in 2012 arguably cost Barcelona a place in the final for the second consecutive year.

As for Ramos? He’s scored just one free-kick for Madrid so, knowing our Sergio, he’ll be taking more of them soon. And probably scoring them too.

Some guys these two are.