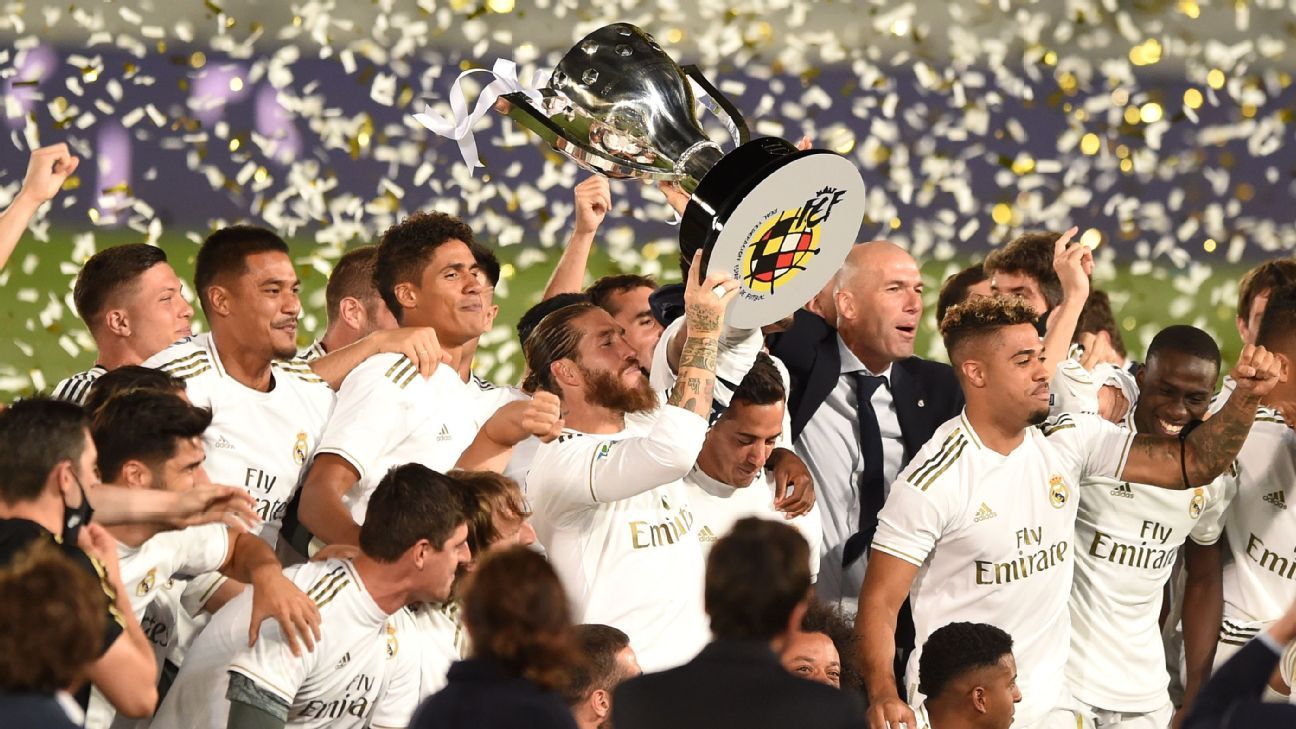 
Most of Europe’s major leagues are now on course to be completed after being paused for the coronavirus pandemic.

Only Ligue 1, which curtailed its season on April 30 after the French government banned games behind closed doors, did not finish the campaign of the top five leagues. But the finals of the Coupe de France and Coupe de la Ligue did take place.

UEFA requested that all European leagues attempt to finish their campaigns no later than Aug. 2, enabling the Champions League and Europa League to play out through the rest of the month. The 2020-21 season is on course to be completed by Aug. 23 with the Champions League final.

– Check out all the remaining fixtures in full
– Don’t have ESPN? Get instant access

When did the league finish? It came back on June 17 and finished on July 26.

What happened in the league? Liverpool sealed their first title in 30 years, finishing 18 points in front of Manchester City.

Who qualified for Europe? Manchester United and Chelsea took the other two places in the Champions League. Leicester City are direct to the Europa League group stage with one place to be decided from the FA Cup final.

Who were relegated? Norwich City, Watford and AFC Bournemouth. They will be replaced by Leeds United, West Bromwich Albion and one more team via the playoffs.

Where were the matches played? Although there was much talk about neutral venues, all games were played at home grounds.

What about the FA Cup? Arsenal will play Chelsea in the final on Saturday, Aug. 1.

When will next season begin? The weekend of Sept. 12.

When did the league finish? It came back on June 11 and finished on July 19.

What happened in the league? Real Madrid won the title ahead of arch rivals Barcelona, finishing five points in front.

Who qualified for Europe? Atletico Madrid and Sevilla FC join Real Madrid and Barca in the Champions League. Villarreal and Real Sociedad will be in the Europa League group stage, with Granada entering in the second qualifying round.

Who were relegated? Leganes, Espanyol and Mallorca. Cadiz and Huesca have secured the two automatic promotion places from the Segunda, with a third to follow through the playoffs.

Where were matches played? Most clubs played behind closed doors at their home grounds, though Real Madrid used the 6,000-seater Estadio Alfredo Di Stefano, home to their “B” team, as the Bernabeu is being renovated. Levante played their six games at the Estadio Olimpico Camilo Cano in La Nucia.

What about the Copa del Rey? This was due to be a Basque derby between Real Sociedad and Athletic Bilbao. Both clubs have said they do not want to play the game without fans so it will be delayed until an appropriate time, meaning the Europa League place transferred to La Liga.

When will next season begin? Sept. 12.

When did the league restart? It came back on Saturday, June 20.

How many games are remaining? 10

What happened in the league? Juventus secured the title with two games to spare.

When will the league finish? The weekend of Aug. 1-2.

Have all the fixtures been confirmed? Yes, all match dates are set up to the final round.

Who qualified for Europe? Internazionale, Atalanta and Lazio join Juve in the Champions League. AS Roma and Napoli enter the Europa League at the group stage, with AC Milan in the second qualifying round.

Who were relegated? SPAL and Brescia went down, with either Genoa or Lecce to join them. They will be replaced in the top flight by Benevento, Crotone and one other team via the playoffs.

Where were the matches be played? All games were played in home venues, behind closed doors.

What about the Coppa Italia? Napoli beat Juve 4-2 on penalties, after a 0-0 in the final, to secure a place in the Europa League group stage.

When will next season begin? It has already been announced that the new season will start on Sept. 1 for contracts, with Serie A expected to begin on Sept. 12.

When did the league finish? It was the first league to get back to action on Saturday, May 16, and wrapped up the league programme on June 27 – the only league to complete before the end of the month.

What happened in the league? Bayern Munich eventually strolled away with the title and after being crowned champions went on to finish 13 points ahead of Borussia Dortmund.

Who qualified for Europe? RB Leipzig and Borussia Monchengladbach took the remaining two places in the Champions League. Bayer Leverkusen and TSG Hoffenheim go direct to the Europa League group stage, with VfL Wolfsburg in the second qualifying round.

Who were relegated? Paderborn and Fortuna Dusseldorf went down automatically, while Werder Bremen beat FC Heidenheim in the relegation playoff to stay in the Bundesliga.

Where were matches be played? All games were played in home venues, behind closed doors.

What about the DFB Pokal? Bayern Munich beat Bayer Leverkusen 4-2 in the final on Saturday, July 4.

When will next season begin? Even though the Bundesliga will finish way before the other leagues, Sept. 19 is the target date. The first round of the DFB Pokal will be played the weekend of Sept. 12.

Ian Darke and Craig Burley believe the FA Cup final between Arsenal and Chelsea could be a high-scoring affair.

When was the league curtailed? On Thursday, April 30 it was announced the Ligue 1 season would be ended with the table decided on a points-per-game basis.

Who were named champions? Paris Saint-Germain won the title for the seventh time in the last eight seasons.

Who were relegated? SC Amiens and Toulouse were relegated and lost a legal challenge to have the decision overturned. Lorient and Lens are promoted to Ligue 1.

What about the cup competitions? PSG beat Saint-Etienne 1-0 in the Coupe de France final on July 24, with the last-ever Coupe de la Ligue final (PSG vs. Lyon) on July 31.

When will next season begin? Aug. 22.

How will the Champions League play out? The final eight will meet in Lisbon, playing one-legged ties. Quarterfinals will take place on Aug. 12-15, semifinals on Aug. 18-19 and the final at the home of Benfica on Aug. 23.

When will next season begin? A simplified qualifying tournament will begin on Aug. 8 and 11 in the preliminary round — though major nations will not join until Sept. 15 and 16. All ties will be one-legged, apart from the final playoff round. The group stage will begin on Oct. 20-21.

When will the competition restart? All of the round-of-16 fixtures have yet been completed, and will be played on Aug. 5 and 6. Internazionale vs. Getafe and Sevilla FC vs. AS Roma will now be one-legged ties, having not played first legs.

How will the Europa League play out? The final eight will meet in Germany, playing one-legged ties in Cologne, Duisburg, Düsseldorf and Gelsenkirchen. Quarterfinals will take place on Aug. 10-11, semifinals on Aug. 16-17 and the final at the home of FC Cologne on Aug. 21.

When will next season begin? A simplified qualifying tournament will begin on Aug. 20 — though major nations will not join until Sept. 17. All qualifying ties will be one-legged, with the group stage beginning on Oct. 22.