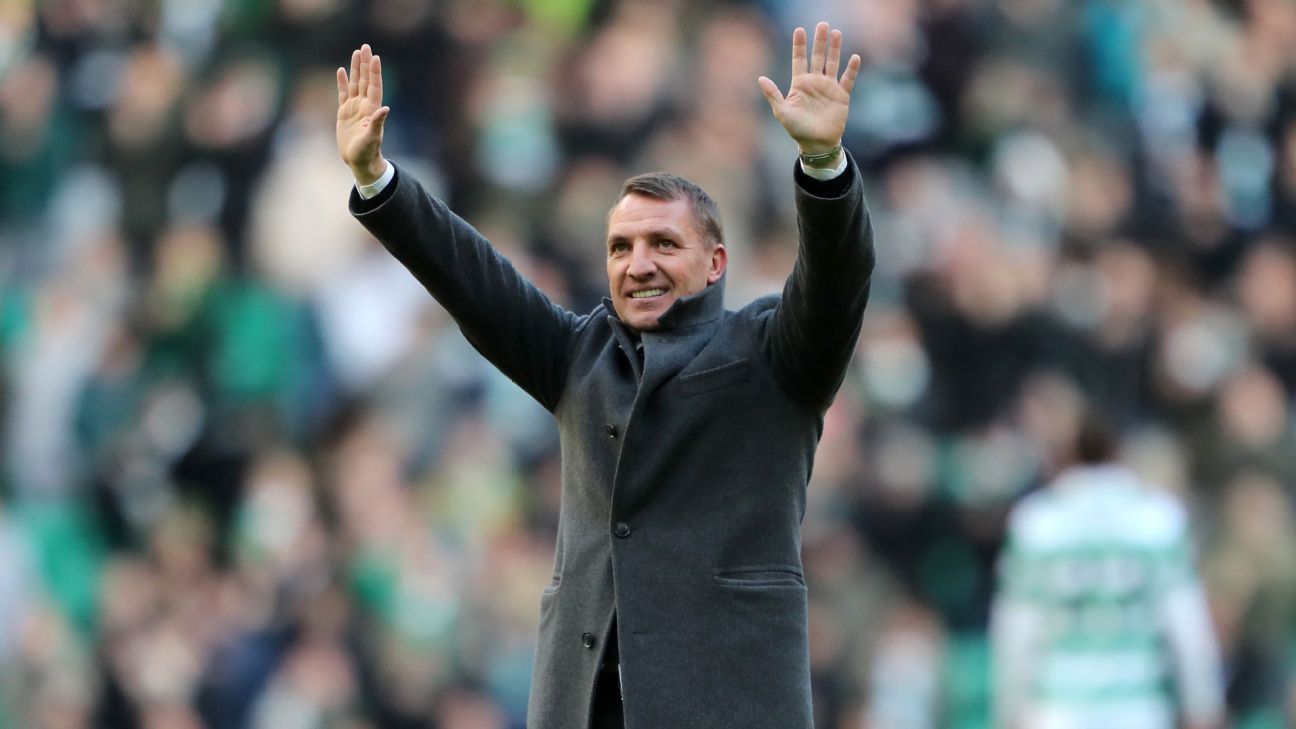 SIR ALEX FERGUSON pauses for a second as 20,000 people inside the SSE Hydro hang off his every word. The legendary Scottish manager is in Glasgow to pay tribute to the Lisbon Lions at Celtic’s ‘Celebrate ’67’ extravaganza, marking 50 years since they became the first British club to win the European Cup. Gazing out at the crowd from a lectern, Ferguson says: “If you gave a Hollywood director this story of Jock Stein and Celtic, they would claim it was fiction.”

That European Cup win on May 25, 1967, will always be the No.1 Celtic blockbuster, but producing sequels has never been a problem for the club. Two days after Ferguson’s stirring tribute to the Lions, Brendan Rodgers’ class of 2017 summoned up a spectacular, dramatic finale to their Treble-winning Invincible season that would also be deemed too good to be true in Tinseltown.

“Magical” was how Tom Rogic described Celtic’s 2-1 Scottish Cup final win over Aberdeen. The Hampden earth had moved for the Australian 13 months earlier when the ball bobbled just before he skied his penalty over the bar to condemn Celtic to a semifinal defeat against Rangers in the same competition. This time, a bolt of lightning struck the rain-soaked national stadium as Rogic waltzed into the box to score an injury-time winner and gain redemption. “Maybe it was all meant to be,” he said.

But the fairytale didn’t end there. Rodgers, a boyhood Celtic fan, had masterminded the Invincible Treble. No other team in Scottish football history had completed a domestic clean sweep without losing a game. Rodgers, in his first season, also became only the third Celtic manager to win the Treble, joining Stein and Martin O’Neill. “It feels surreal and it’s an honour,” he said. “Maybe the stars were aligned this year.”

Then there was Kieran Tierney’s emotional subplot, which tugged at the heartstrings of even the most hardened supporter. Mr. Celtic, as teammate Patrick Roberts christened him, was left with shattered teeth and a dislocated jaw after being caught by Aberdeen’s Jayden Stockley in the first half. Tierney’s final was over, as he was rushed to the Scottish Centre for Excellence in Dentistry in Govan for emergency treatment from Celtic’s dentist, Arshad Ali.

Yet nothing would stop him from returning for the celebrations. He arrived back at the stadium car park just as Celtic captain Scott Brown was leading the team up the Hampden steps. But with Aberdeen fans departing in their thousands, the vehicle was unable to get in. Tierney refused to wait. Still dressed in his Celtic kit and boots, he jumped out and sprinted through a sea of red shirts toward the Hampden front door.

Tierney got there just in time and claimed one of the biggest cheers of the afternoon from the Celtic support when he appeared. It was fitting that the lifelong fan was the last player to show off the Scottish Cup on such a historic occasion. The teenager punched the Celtic badge on his chest in an outpouring of raw emotion. He was in pain, but nothing would stop him savouring that moment. Like the rest of his Celtic teammates, he was an Invincible Treble-winner.

That’s what Rodgers had urged his players to become when he gathered them together inside the Hampden home dressing room for their prematch address, around 10 minutes before kickoff. He evoked the spirit of Lisbon in his team talk, 50 years and two days on from that triumph. But he also warned his players they couldn’t rely on fate. They had to take control of their own destiny.

“I said to them that this is a final that you want people to write about afterwards,” said Rodgers. “But you have to make history — it doesn’t just happen. The players showed remarkable courage to get the result and create their own history. To go 47 domestic games unbeaten and win three trophies is an incredible achievement. It’s monumental.”

With the Premiership title and Betfred Cup already secured, Celtic prepared for the final under pressure to complete only the fourth Treble in the club’s history. “Everybody was hyping it up for months, to the extent that it’s almost the case that if we hadn’t done it, a lot of people outside the club would have been happy about that,” said McGregor.

The Invincibles tag added another layer of expectancy. Celtic’s historic unbeaten Premiership record was secured six days before the Scottish Cup final. Perhaps unfairly, defeat at Hampden against Aberdeen would have taken a shine off that achievement, and Rodgers sensed all was not right within his squad two days before the final.

“We’ve had one bad training session since I’ve been here, and that was on Thursday before playing Aberdeen,” said Rodgers. “I cut it short. I walked inside. The quality wasn’t good enough. Maybe there was something floating around in their minds about how we had won the league. Maybe there was a wee celebratory feel, but the session was stopped.”

Rodgers made his displeasure clear to his players. It was the second-last session of the season, but he simply wouldn’t tolerate levels dropping. “That’s not how we work,” he said. “We set a standard right at the beginning.” It was the jolt the Celtic players needed. The Friday session, held 24 hours before the final, was conducted exactly how the manager wanted.

By that afternoon, Rodgers had settled on his starting lineup for Hampden. There were no surprises. [Moussa] Dembele was only fit enough to take a place on the bench, so Leigh Griffiths started at the focal point of Celtic’s attack.

The Scotland striker had endured a frustrating campaign. A prolific opening spell under Rodgers was halted when he was injured in early September. Dembele claimed the jersey, and Griffiths struggled to win it back. A string of niggling injuries didn’t help his case, but Rodgers also felt his basic conditioning needed to improve as he delivered a public warning in January. “Talent is not enough,” he said.

The Celtic manager warned Griffiths that he had to work harder every day in training and completely devote his life to football. Rodgers told him he had to be ready to cope with the demands of playing in his high-pressing, aggressive style. Griffiths took that advice on board and knuckled down. When Dembele pulled up against Rangers in the Scottish Cup semifinal, he grabbed his chance.

Griffiths won the penalty that sealed Celtic’s place in the final and then claimed four goals and five assists in the five post-split fixtures in the league. There was also a tantrum after being subbed during Celtic’s 5-0 win over Partick Thistle. Rodgers gave Griffiths a death stare after his strop, before planting a kiss on his cheek at full-time. The Celtic striker later apologised as Rodgers assured him his cup final involvement would not be hampered by his fit of pique.

Roberts also emerged as a key player in the final two months of the season, ousting James Forrest from the right side of Celtic’s attack. On loan from Manchester City, he blossomed under Rodgers’ guidance and rejected the chance to play for England at the FIFA U-20 World Cup in South Korea to stay for Celtic’s Treble bid. “The chance to make history at this club is important to me,” said Roberts.

Invincible: Brendan Rodgers’ Historic First Season at Celtic is out now in paperback (£9.99) and ebook, published by BackPage

By the time the team bus pulled into Hampden’s underground tunnel, Celtic were ready, but Rodgers had a surprise in store. The previous night, during a team meeting, he had used a projector to display individual messages of support for every player from their families. When they entered the dressing room to prepare for the game the next day, those same messages had been placed inside envelopes and sat next to the players’ lockers.

It took a lot of planning, but that touch meant a lot to Rodgers’ players. Lustig later posted an Instagram photograph of his message from wife Josefin and daughters Lucia and Lexie: ‘Mikael, Beach ball, derby goal, rabona — can’t wait to see what happens next season. Love you.’

Celtic were mentally and physically prepared, but Aberdeen tested their resolve with Jonny Hayes’ early opener. Questions were being asked as Rodgers’ players restarted the game, but the response was instant. From the restart, Celtic kept the ball and worked an opening for Stuart Armstrong to bury a left-foot shot past Joe Lewis.

Rodgers let his players dry off at half-time before reiterating the need to stay calm. Aberdeen were operating a man-marking system in certain areas, and the Celtic manager was convinced they would tire eventually. He urged his players to shift the ball quickly, to move their opponents around the pitch and just wait for their legs to go. “Space will open up,” he told them, and he was right.

The mental and physical fitness Rodgers had spoken about so often in Slovenia during preseason came to the fore. Aberdeen were hanging on as the game drew to a close, and the heavens had opened over Hampden. A bolt of lightning struck the turf, and thunder roared overhead just as Rogic entered the Aberdeen box. The clock showed 91 minutes, but time stood still as the Australian jinked past Andrew Considine and beat Lewis from the tightest of angles.

Rodgers raised his hands to the sky as Rogic ran straight into the arms of the elated Celtic supporters down by the corner flag. This was history. Celtic had secured an Invincible Treble.

“It’s probably the best feeling you can have on a football pitch to score the winner in the last minute and then jump into the crowd,” said Rogic. “It was an amazingly proud moment for me. It’s a perfect end to a special season. To go unbeaten domestically, to get the Treble, it’s just amazing. It’s something that we will look back on forever.”

Roberts, who embraced his close friend Tierney at the end, continued in a similar theme. “When I look back on my career, this will be the biggest highlight, my biggest accomplishment in the game.” Lustig choked back tears on the pitch as he tried to express his emotions. “It feels amazing. We can all retire now,” he said.

McGregor, who had been at the club since primary school, gave a revealing insight into the Celtic players’ awareness of how much expectancy was on their shoulders, just days after the Lisbon Lions’ 50th anniversary. “It’s been an emotional week and it was in our minds that we had to give the fans another great moment,” he said.

“The Lisbon Lions stuff was inspirational for us. You’re writing yourself into the history of Celtic Football Club. You know how big and important that history is, so what we’ve managed to do is really special.”

“It’s the best feeling I’ve ever had in football,” said Scott Brown. “The fact the final went down to the last minute sums us up. For the 10 years I’ve been at Celtic this is the best, most determined bunch of lads I’ve ever played with. This is the biggest achievement anyone could ask for.

“When you go back to that first game in Gibraltar, I don’t think anyone would have expected this. For us to go all the way through the season undefeated and to win three trophies, that’s phenomenal, just phenomenal.”

Rodgers embraced every single player and member of staff on the Hampden pitch and then shared a moment inside the dressing room with Dermot Desmond, Peter Lawwell and Celtic’s board members. They congratulated and thanked him for his work in transforming the team. Rodgers’ reply was simple. Leading Celtic through such a special season had been an honour.

“I was born into Celtic, and it’s a huge privilege to manage this club,” said Rodgers. “It’s been a dream. I couldn’t have written the script for this season any better.”