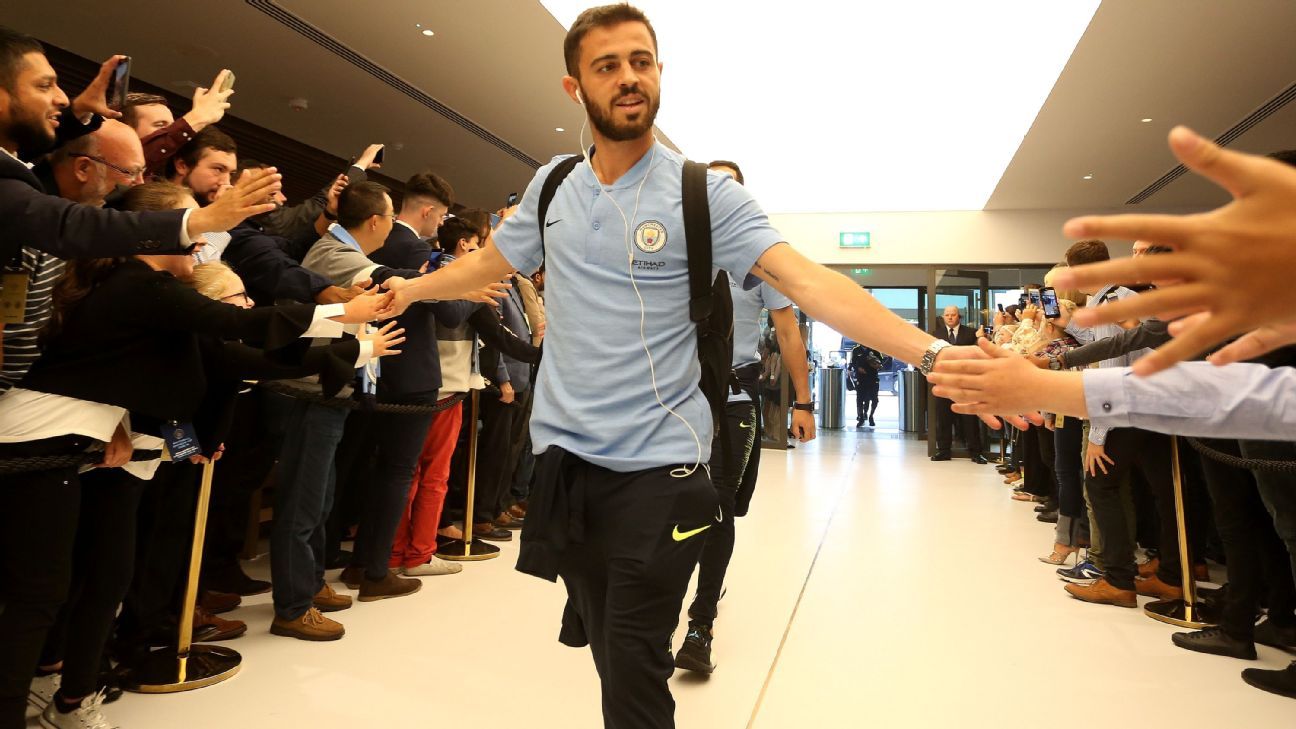 As a youngster coming through the ranks at Benfica, Bernardo Silva had two nicknames. One was rather more generous than the other, but both captured something about him and they still do now.

The first was “O Messizinho do Seixal” (Seixal being the neighbourhood were Benfica’s academy is based) — Messizinho meaning “Little Messi” because of similarities between the two players in style.

Indeed, from the moment he first turned up for a trial, Bernardo was a sensation, capable of producing feats of subtlety and misdirection on the pitch that would make a magician blush. As one of his former coaches once said: “It’s like the ball is part of his body.”

The other nickname — the less flattering one — was Cabeças (“Heads”), in honour of his top-heavy physique. The thinking was presumably that he had a big head on small shoulders, but however it came to be pluralised, people remembered the way he’d grit his teeth and compete, despite being, to use the charming Portuguese phrase, “tiny since forever.”

Yet for all his talent and passion, Bernardo ended up leaving Benfica before making a mark at the first-team level. He went on to star at Monaco and, two seasons later, sealed a €50 million transfer to Manchester City. But as the 24-year-old steps out of the shadows to become a protagonist at the Etihad while Kevin De Bruyne is out injured, his experiences at his boyhood club have never looked more relevant.

It was in Benfica’s youth system, after all, that Bernardo first proved his staying power, digging in to carve out a place for himself despite doubts over his physicality. And his new position in the centre of Pep Guardiola’s cathedral of passing? That’ll ring a few bells in Lisbon too.

Filipe Nascimento, a former Benfica trainee who now plays for Levski Sofia, knows the midfielder better than most.

“I first met him when we were seven years old,” he tells ESPN FC. “Bernardo was a really happy kid, passionate for football and one of the best players of his age group. Even then, he could speak a bit of English. He was always really intelligent.”

He needed to be, too: as photos from his first years at the club attest, Bernardo was but a bundle of fluff.

“He was short, and had to learn how to compensate for that,” Helena Costa, his first coach, told MaisFutebol in 2013. “He had to avoid contact, to think quicker than the others. Some of the other boys were almost twice the size of him.”

For the most part he took that discrepancy in his stride, progressing serenely through the age groups. Puberty, though, proved to be an issue: other kids shot up and Bernardo, a late developer, found himself on the outside looking in. “At 16, he must have been starter three or four times a season, over 40 matches,” recalls Nascimento. “He thought about leaving the club.”

There are resonances here. At City, too, Bernardo would have been forgiven for feeling crowded out at certain moments, watching on as a procession of attacking talent (Ilkay Gundogan, Leroy Sane, Gabriel Jesus, Riyad Mahrez) walked through the door and to the front of the queue. But then, as now, he knuckled down, determined to succeed.

Bernardo’s breakthrough came in the summer of 2012, when he was named the player of the tournament at a youth competition in Germany. The following season, with the Juniores team, he was unstoppable, scoring 18 goals as Benfica won Portugal’s under-19 league. “That was the year when he really came to people’s attention,” Nascimento says. “We had a team with great individual quality and Bernardo was one of the best.”

Tellingly, he did so not as a winger but as a central playmaker, pulling the strings behind the striker. “He played as a No.10, in attacking midfield,” explains Nascimento. “I’ve seen Bernardo play out wide, and he’s done well there, but I like to see him infield, bossing the game.”

It is a role he has reprised at City in recent weeks: there was that stellar display against Chelsea in the Community Shield (“A masterpiece,” in Guardiola’s words) and he also started centrally in the win over Arsenal. De Bruyne’s injury should mean he has further opportunities in that position in the months ahead, and some have already earmarked him as the long-term heir to another of City’s chief creators.

“He can play a fundamental role there,” Jose Fonte, a teammate of Bernardo’s for Portugal, tells ESPN. “I think his style is very similar to that of David Silva. Perhaps he’s a bit quicker, but they’re really not so different.”

Monaco fans will confirm that he’s also pretty good at influencing games from the flank, and his willingness to adapt to different roles has been a feature of his career so far. “He’s modest and intelligent, and he wants to learn,” says Fonte.

Nascimento highlights his old friend’s lack of ego: “He’s a really modest guy, really calm. He’s not a show-off and doesn’t get carried away.”

One particular positional switch was too much for Bernardo to bear, however. After representing his country at the U-19 European Championships and shining for Benfica B in Portugal’s second flight, he expected to be pushing for a first-team berth at the start of the 2014-15 season. Jorge Jesus, though, had other ideas, making the youngster’s place in the pecking order crystal clear.

“I was training with the first team but mainly as a left-back,” Bernardo later told L’Équipe. “I knew then that I didn’t have a future with the team.” One week and a few Jorge Mendes phone calls later, he was in Monaco. “I didn’t think twice,” he added. “It was the best solution.”

There appears to be no such friction with Guardiola, who has rarely held back when praising the player. “He is so intelligent, so clever,” said the Catalan manager after the Chelsea win earlier this month “He is a fighter, a competitor. I think he is the most beloved guy in our team.”

That feeling will chime with those who encountered him before he unleashed his charms on the wider world. And there is also a feeling that the kid they knew as a top-heavy wonder, the big boys’ worst nightmare, has a few layers of potential left to explore.

“I always imagined he’d get to the top, but I don’t think everyone had that view, because sometimes the physical side of the game is overvalued. But I believed in him because his quality was incredible,” adds Nascimento. “He has everything it takes to be one of the best in the world. He’s a phenomenon.”