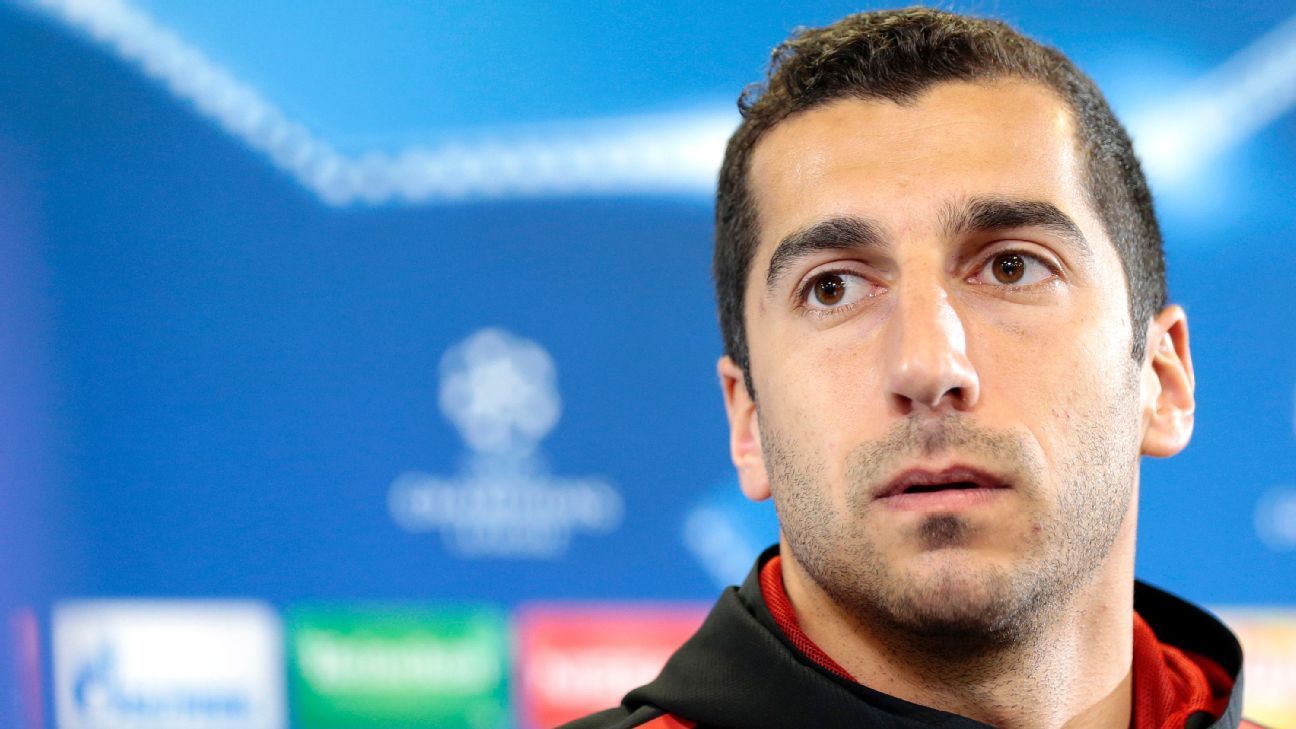 
It might be a glimpse of Jose Mourinho’s past and future alike. Henrikh Mkhitaryan could be seeing a predecessor and his successor alike. Whether he does so from close quarters or with a view from the dugout as a substitute is another matter. Because while Arsenal against Manchester United was shaping up as Mesut Ozil against Mkhitaryan, Mourinho has injected doubt into that setup.

The German will surely start. The Armenian may be benched or consigned to the stands again, deprived of a chance to outshine the man who may oust him. Ozil’s star is in the ascendant again following his terrific display in the North London derby. Mkhitaryan’s has fallen as he has tumbled down the pecking order at Old Trafford. Rewind three months, and he was the Premier League’s most creative player, with five assists by the end of August, while Ozil was being criticised for an abject display in Arsenal’s 4-0 shellacking at Anfield. Then the notion that Mkhitaryan could be jettisoned to make way for Ozil seemed far-fetched.

Now the Armenian is being linked with a return to Borussia Dortmund. Ozil, whose contract at Arsenal expires next summer, is tipped to replace him at Old Trafford. It would both appeal to Mourinho’s Machiavellian streak, weakening a rival while strengthening his own squad, and his business brain, freeing up funds for other transfer targets by getting Arsenal’s £42.4 million buy for nothing. It would reunite him with a former ally.

There is a temptation to think of Deco and Wesley Sneijder as Mourinho’s quintessential No. 10s; they, after all, were the inventive fulcrums of his two Champions League-winning sides. Yet Ozil was the creator in chief in his most prolific team, the Real Madrid side who scored 326 league goals in three seasons.

“He is the best No. 10 in the world,” Mourinho said when Ozil joined Arsenal. “He makes things very easy for me and for his teammates. Everyone loves him and sees a bit of Luis Figo and Zinedine Zidane in him. Ozil is unique. There is no copy of him, not even a bad copy.”

It suggests, at least, that he does not deem Mkhitaryan a poor Ozil imitator. The 2016 signing was omitted from three of the past four games, with Mourinho saying Mkhitaryan had been “disappearing” in matches and not working hard enough. Those criticisms have long been levelled at Ozil, and not just in an Arsenal shirt. The World Cup winner revealed in his autobiography that Mourinho, in a dressing-room tirade, once called him “such a coward,” saying: “You think two beautiful passes are enough. You think you’re so good that 50 percent is enough.” But he picked him for 90 percent of Real’s league games, starting him in 72 percent of them. The corresponding figures for Mkhitaryan — beginning 48 percent of league matches, featuring in 69 percent — are far lower.

If Mourinho summed up the case against Ozil in anger, his 2013 comments amounted to the most emphatic endorsement of him. At times, it has felt that Arsene Wenger has been a lone voice defending his playmaker. Both can suffer from the English obsession with body language; neither is best suited to a culture that demands conspicuous displays of effort. Mourinho, the import who can seem more English than the English, arrowed in on it when he asked Ozil to do more running.

Both appear more appreciated in Germany than in England. Mkhitaryan was voted the Bundesliga players’ player of the year in 2015-16. Ozil has been named the German national team’s player of the year for five of the past six years. “There is no doubt in Germany about the quality of Mesut Ozil,” said the Premier League’s leading German manager, Jurgen Klopp, in August. “He is an outstandingly skilled boy.”

They are genuine creators, the sort who make more goals than they score. In 2015-16, Mkhitaryan had the most assists in the Bundesliga, and Ozil the most in the Premier League. They possess unselfish streaks and have performed best alongside players with contrasting attributes. Ozil was a fine foil to the selfish Cristiano Ronaldo. Mkhitaryan, at the start of the season, was a very different sidekick to the bigger and more exuberant Paul Pogba when United proved prolific.

Each has stood out in a Mourinho team. United, in particular, have a phalanx of 6-footers who can launch an aerial attack. Like Ozil, Mkhitaryan possesses an elfin elusiveness to ghost into positions, but that more languid approach can make each a lightning rod for criticism. The suggestion is that they do not perform in the major matches. The evidence is decidedly mixed. Mkhitaryan scored in the Europa League final. Ozil unlocked United at the Emirates Stadium two years ago and Tottenham this month. Neither, however, has delivered enough in major away games.

While Wenger has been faulted for invariably selecting Ozil, Mourinho was blamed last autumn for omitting Mkhitaryan. History may repeat itself on Saturday, with the German starting and the Armenian benched. And perhaps then Mourinho will revisit the old days and re-sign Ozil next summer.