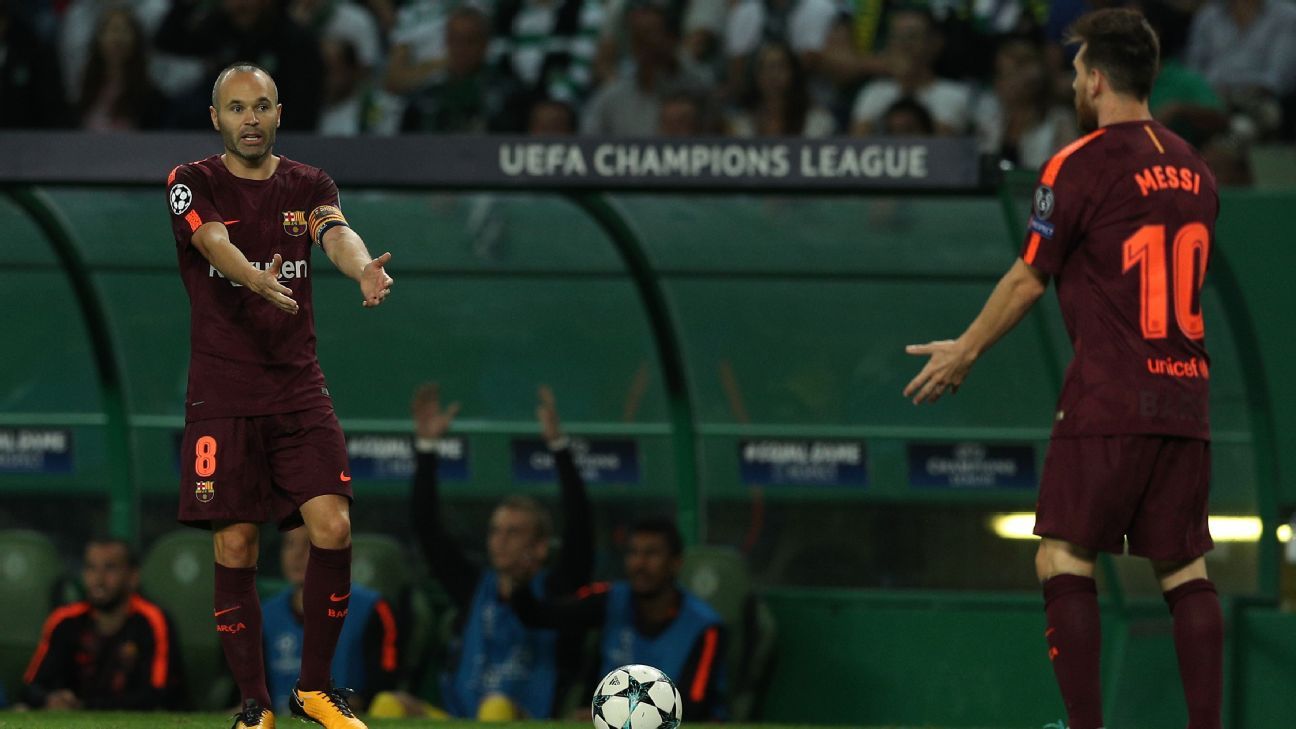 
Most clubs would be over the moon to start the season with eight consecutive wins — six in La Liga and two in the Champions League. However, Barcelona are not most clubs, and things are never quite that simple.

There’s satisfaction with how Ernesto Valverde’s side have started the campaign given all the questions posed during a turbulent summer, but there’s always a desire for more. That’s why, after the 1-0 win against Sporting Lisbon on Wednesday, the Barca coach was asked if his side were boring him.

“I don’t get bored, especially not when we win,” Valverde replied. “There are times when you win in an exciting way, scoring lots of goals, and then there are other times when you have to suffer to win. That’s how it is.”

But could there be something in it? Have Barca become boring?

Bear with me on this one.

Scoring 24 goals and conceding just two in an eight-game winning streak admittedly isn’t the dictionary definition of boring. However, there is an argument to be made that Barca have not convinced, especially away from home, and that they may be exploited by better sides when there’s more on the line.

Valverde’s side have produced languid performances on the road. Despite winning at Alaves, Getafe and Girona in recent league games, there was little to write home about.

Wednesday’s win against Sporting was an extension of those displays. The Portuguese side’s coach, Jorge Jesus, was quite rightly seething after the game at a missed chance to beat a Barca side who, at many points during the past decade, have been almost unbeatable.

The recurring theme with these drab performances is their dependence on Lionel Messi. If the Argentine doesn’t bring the game to life, no one does. There have been some exciting moments from Nelson Semedo, but he’s the right-back and he’s still adjusting to his new club after a summer move from Benfica.

In the past, when Messi was sidelined, man-marked or off-colour, you could often rely on Neymar to entertain. Before the Brazilian, you could usually look to the partnership of Xavi and Andres Iniesta to mesmerise somehow. There was David Villa, Thierry Henry, Samuel Eto’o …

Now, with no Neymar, Luis Suarez out of form and Ousmane Dembele injured (circumstance has certainly played a part), Valverde has been forced to become more pragmatic.

The coach has emphasised the need for the lines to be together, for Barca to attack and defend as a team and he has, invariably, got that. There’s no more reliance on the Messi-Suarez-Neymar trident.

But, exceptions aside, it’s all been a bit … boring. Boring but effective, which should be considered more of an observation than a condemnation. Besides, it’s still early days in the Valverde era, the signs are positive and he has lots of time to make things exciting.

Given the gloomy atmosphere surrounding Barca over the summer, their start to the season has far exceeded expectations, and at times they have been insatiable, walloping Eibar and Espanyol and outclassing a European powerhouse in Juventus.

Leaving aside a few moments in the Liga curtain raiser against Real Betis, Barca have always played on the front foot when at the Camp Nou, pressing aggressively and playing sweeping attacks involving almost the entire team.

Jordi Alba has found a new lease of life under Valverde and has resembled a left winger more than a left-back while Semedo and Aleix Vidal on the other flank have been even more adventurous, making Barca a terrifying side to deal with when they are at home. Look at how they destroyed Juventus, refusing to settle when they were 1-0 up, hunting down the Italians in the second half and baying for more.

There was a subdued atmosphere at the Camp Nou at kickoff against the Serie A champions, but by the end the ground had come alive from Barca’s dominant display. Boring it certainly was not.

Valverde’s side have had a tougher time away from home, granted, which serves to remind that while at times La Liga may seem heavily unbalanced, there are very few easy away games.

Getafe certainly gave Barca a fright at the Coliseum and on another day might have taken a point, but the Catalans took all three thanks to some bold substitutions from Valverde and their persistence, which led to Paulinho’s rocket. And what type of fan doesn’t love a late winner, especially when it’s not necessarily deserved?

Neighbours Girona refused to make life easy for the Blaugrana either, with Pablo Maffeo completely taking Messi out of the game, but Barca still got the job done with their talisman shackled, and rarely looked in danger.

No team can be expected to win every single game 5-0, and if they did, where would be the fun in that? So far under Valverde, Barca have been flexible and solid away, while brushing teams aside at home.

Let’s also not forget the slip-ups against supposedly accommodating opponents last season that cost the team the title. Instead, let us appreciate this perfect start for a new coach who was given little backing in the transfer market.