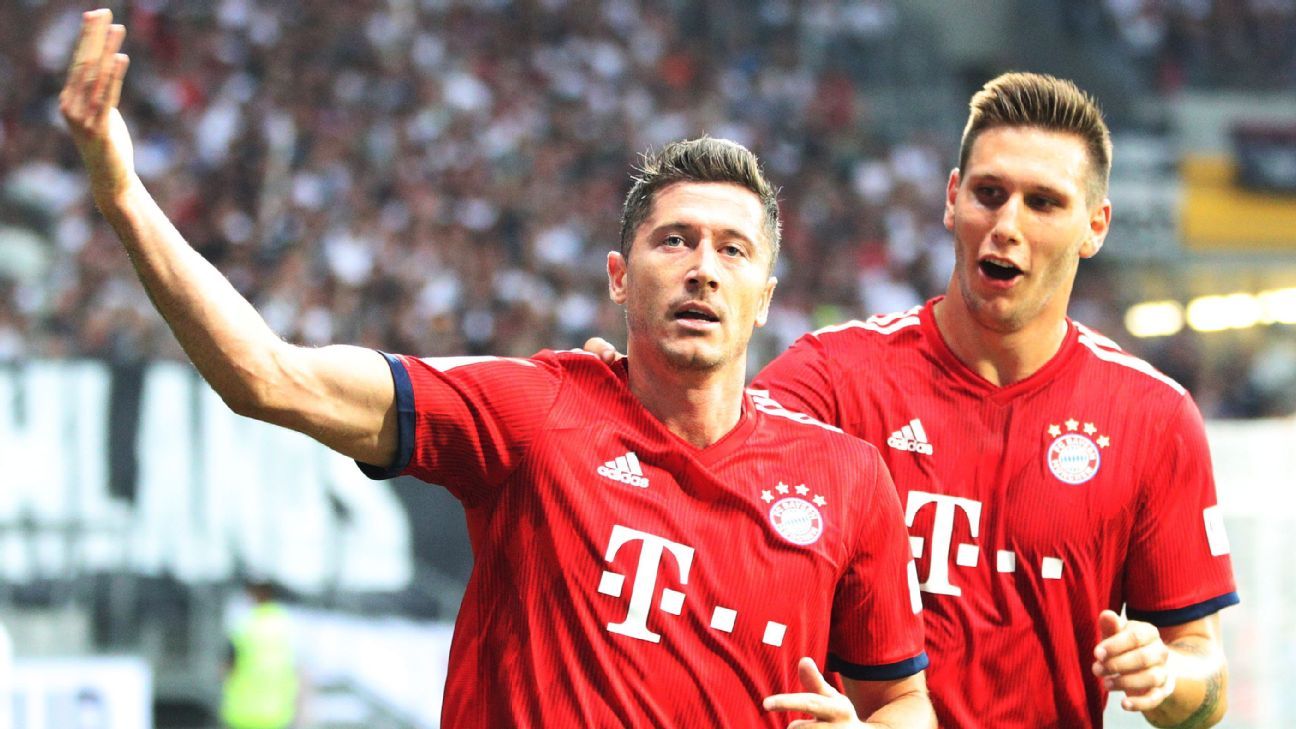 
Bayern Munich cruised to a third consecutive DFL Super Cup success with a comfortable 5-0 win in Niko Kovac’s first game in charge against his former club Eintracht Frankfurt. Goals from Thiago Alcantara, substitute Kingsley Coman and a clinical Robert Lewandowski hat trick lifted the German champions to their first trophy of the season.

Bayern’s stocks are already flying high ahead of new season after sealing a leisurely opening victory in Germany’s financial capital in a game which saw Manuel Neuer play his first competitive game in 11 months in Bavarian colours. Lewandowski also gave a timely reminder of his finishing skills with a hat trick.

After handing out a 5-0 thrashing away from home? No. None.

8 — Kovac provided a tactical masterclass against his former club with whom he had won the German Cup final only three months previously in Berlin.

GK Manuel Neuer, 7 — Hardly tested on his return as captain for his first competitive game for Bayern since September last year.

DF David Alaba, 7 — Moments of promise on the left flank in tandem with veteran Franck Ribery, and provided the cross for Bayern’s fourth before suffering what looked like an ankle injury with 15 minutes to play.

DF Mats Hummels, 6 — Picked up a deserved yellow card on the stroke of half-time for a heavy foul on Mijat Gacinovic who threatened to run clear. Might have seen red but was spared the walk of shame as VAR remained inexplicably quiet on the sidelines.

DF Niklas Sule, 7 — The Frankfurt-born defender enjoyed a leisurely evening at the back against a limited Eintracht side.

DF Joshua Kimmich, 8 — Fizzed in a brilliant cross to feed Lewandowski for the opening goal and showed much improved defending than we witnessed for large periods of last season and more recently for Germany in their embarrassing World Cup campaign.

MF Thiago, 8 — Pulled the strings in midfield and crowned a superb performance with the final goal of the evening with five minutes to play.

MF Franck Ribery, 6 — Enjoyed some promising moments early on but faded appreciably and would have been hooked off but for Robert Lewandowski’s spat with David Abraham.

MF Arjen Robben, 8 — Missed the cup final defeat against Eintracht three months ago but continues to roll back the years with vibrant performances. Whipped in a fierce corner for the second goal, before bringing out the best out in goalkeeper Frederik Ronnow early in the second half with a left-footed drive. Robben was given a breather with the game done and dusted with Bayern leading 3-0.

MF Thomas Muller, 7 — Fired a long-range shot narrowly wide 10 minutes before the break and was withdrawn with Bayern totally cruising and already 4-0 up just after the hour.

FW Robert Lewandowski, 9 — Expertly headed home the opener on 21 minutes from a superb Kimmich cross, before doubling the lead in the same fashion just five minutes later. Lewandowski completed his hat trick with a composed finish nine minutes after the break. With just a couple of weeks left in the transfer window, it was perhaps a shame he didn’t add another five goals to alert his dream club Real Madrid again of his prowess. Lewandowski was embroiled in a running feud with David Abraham throughout the game and was wisely withdrawn from the fray immediately after the Eintracht captain caught him with a stray elbow.

MF Kingsley Coman, 8 — The French youngster scored within six minutes of his introduction as a substitute knocking in Alaba’s cross at the far post. Later laid on the final goal of the evening for Thiago after cantering clear on the right flank.

MF Leon Goretzka, 6 — The free transfer signing from Schalke replaced Muller just after the hour with the game already in the bag and had absolutely no need to break into a sweat.

FW Sandro Wagner, N/R — Wagner replaced Lewandowski and provided the biggest laugh of the evening with a comical miss from just two yards out in the final minutes.