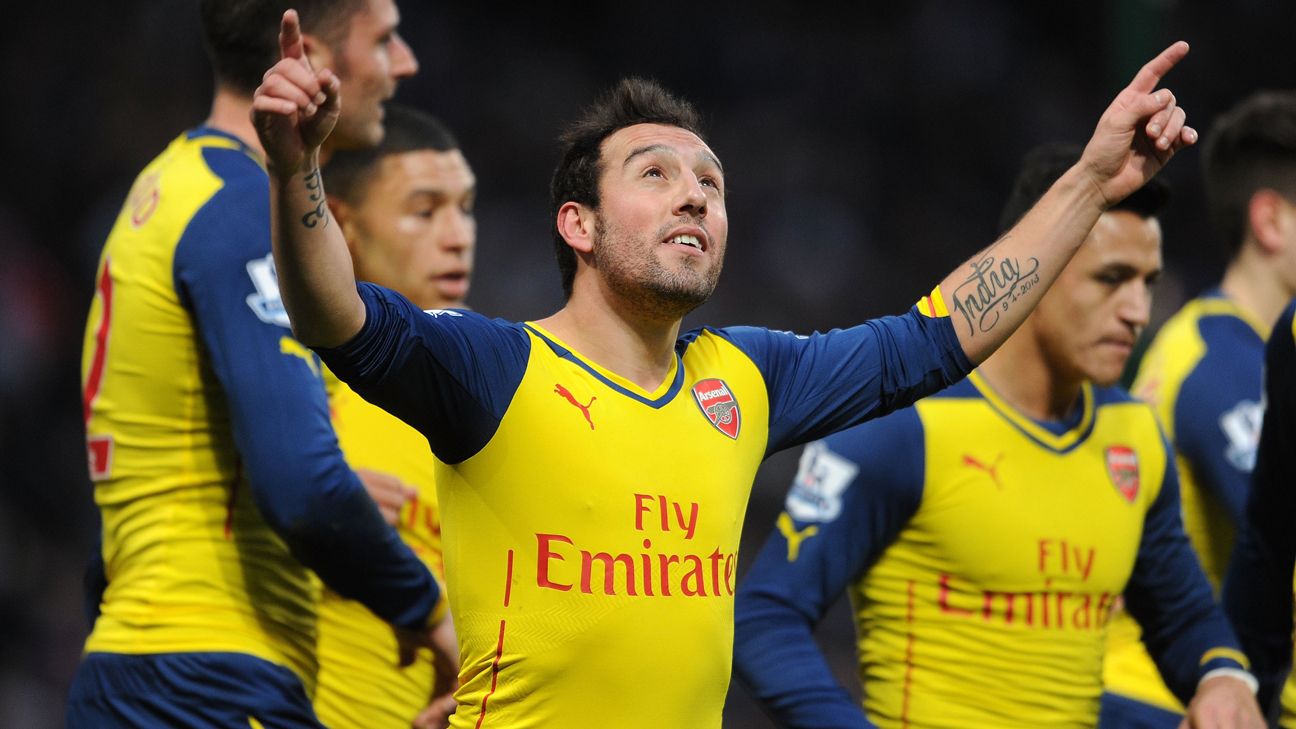 
Thursday wasn’t a particularly enjoyable day for Arsenal supporters. Shortly after sitting through a dull goalless Europa League draw with Red Star Belgrade, many will have scrolled through their social media feeds on the way home and discovered the horrifying extent of Santi Cazorla’s ankle and Achilles tendon problems.

The graphic pictures of the injury, as well as a moving story in which Cazorla reveals he feared his foot would be amputated, goes far beyond the usual football fitness woe. Yet, ultimately, it’s such a sad tale precisely because he was, and hopefully is still, such a wonderful player; possessing a low centre of gravity and tremendous balance, he was two-footed and brilliant at receiving the ball on the half-turn.

The timing also felt particularly unfortunate because Cazorla’s outstanding performance in an Arsenal shirt came in a 2-0 January 2015 win at Manchester City, which happens to be where the Gunners visit this Sunday.

Playing in a deep role, Cazorla was wonderful, continually turning defence into attack with speedy pirouettes. It was the ultimate central midfield display, a rare example in modern football of an individual player genuinely running a game.

Unfortunately he has barely played since then and Arsenal have rarely produced similar performances; since the start of 2014-15, that game was their only win in 19 games at Man City, Man United, Tottenham, Chelsea and Liverpool. It would be an underwhelming record for a bottom-half team, so qualifies as an embarrassment for a club of Arsenal’s stature.

It wasn’t always like this. Arsenal’s 2001-02 title winners went unbeaten away from home, a feat replicated by the “Invincibles” two years later. There was a feeling at the time that Arsene Wenger’s side were better away from home, in part because Highbury had the smallest pitch in the league and opponents found it easier to shut down flair players.

However, equally important was that Arsenal were devastating on the counter-attack, capable of sitting back before breaking at tremendous speed when opponents felt compelled to attack on their own turf.

A debate since those glory days has been whether Wenger actually wants his side to play in that manner. Arsenal’s default approach over the last decade has been about relentless ball retention and playing possession football, yet this has been punctuated by various displays of intelligent, reactive, tactical play on their travels.

A 1-0 victory at Tottenham in 2013-14, most memorable for Tomas Rosicky’s stunning early winner, was also notable for Arsenal’s deep defending, while the City win was also achieved on the counter-attack.

Yet too often Wenger’s sides have been open in big matches and exposed by opponents on the counter. The 4-0 defeat at Liverpool earlier this season was a classic example of Arsenal throwing men forward into attack and exposing their centre-backs.

They have been poor on the road in the league this season, with their only victory coming last time out against an Everton side so disjointed that their manager Ronald Koeman was given his marching orders the following day.

Arsenal’s most recent away trip to one of the top six, a 0-0 draw with Chelsea in mid-September, produced an excellent, dominant performance. However, it might cause problems in the long-term if that approach is adopted as the default: Wenger’s side were effective because their 3-4-3 matched Chelsea’s 3-4-3 and their pressing worked because each player had an obvious direct opponent to shut down.

“We will of course try to play our game, we will not hide,” said Wenger ahead of Sunday’s game. “When we go there, we want to defend well. But you cannot go there only focused on defending, we want as well to play with the ball and create dangerous situations. Sometimes the best way to defend is to attack… when you want to play football, you have to accept risk.”

All of which sounds like Arsenal are going to take the game to their opponents and risk being exposed on the counter, as Napoli were for Sergio Aguero’s goal in midweek. But while sitting back and countering themselves is also no guarantee of success — this City team is capable of devastating passing combinations to break down deep-lying defences — it might be the best approach.

Personnel is one reason for that. Arsenal’s forward line on Sunday will look different to that which started at Chelsea: Rather than Alex Iwobi and Danny Welbeck playing the inside-forward roles, Mesut Ozil and Alexis Sanchez are likely to be in the line-up.

They are two of the league’s most dangerous attackers and Ozil is particularly devastating on the break, as he showed against Everton, when he ran into space and used the ball efficiently after quick turnovers.

And that is more relevant to the performance Arsenal require this weekend, even if City will concede possession less readily and leave fewer gaps between the lines. If Arsenal press in advanced positions at the Etihad, one suspects Pep Guardiola’s side will play around them more easily than Chelsea; City have defenders comfortable in possession and should also have an extra man in midfield.

Memories of Cazorla’s genius performance nearly three years ago might be tinged with sadness at present, but that counter-attacking spirit points the way for Arsenal this weekend.