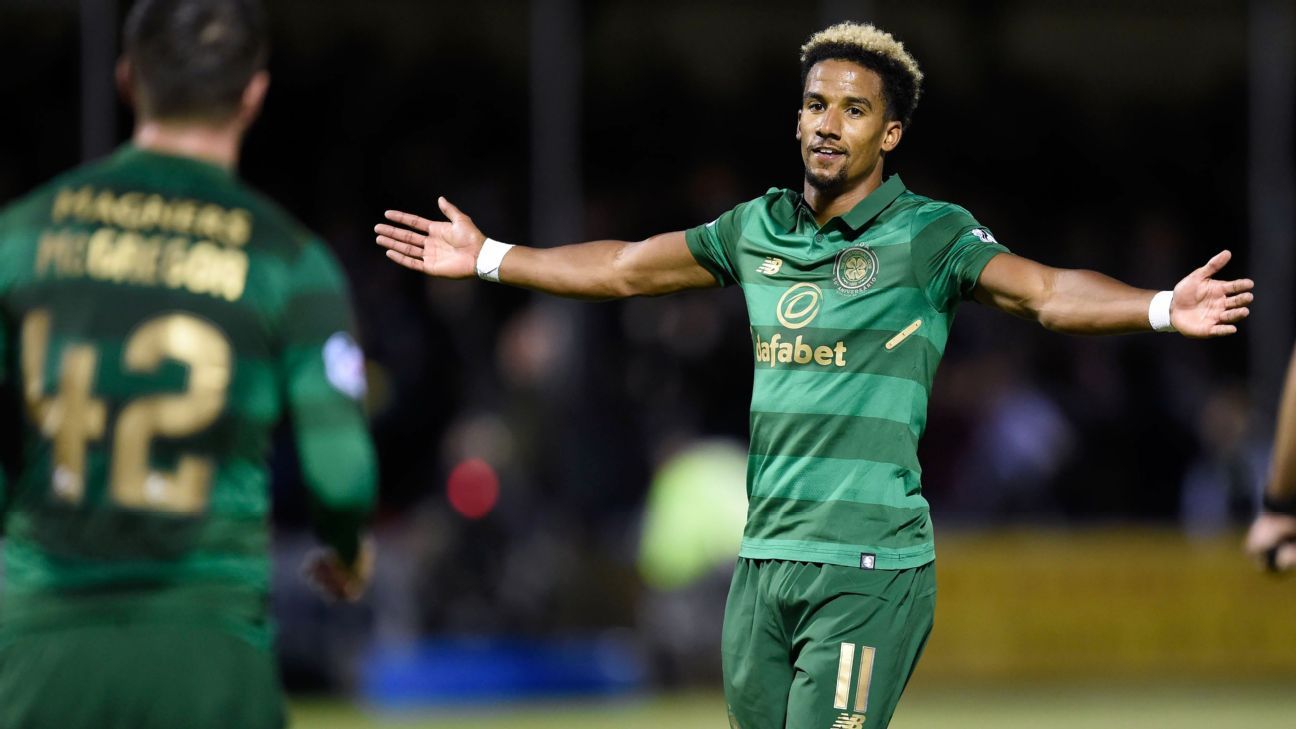 Scintillating Celtic moved top of the Ladbrokes Premiership with a 4-1 dismantling of Hamilton at the SuperSeal stadium.

Returning midfielder Stuart Armstrong opened the scoring in the 17th minute before attacker Scott Sinclair fired two in before the interval.

Debutant Odsonne Edouard added a fourth to show the gulf in class between the two teams although Accies substitute Alex Gogic, on for Dougie Imrie, headed in a late consolation.

Brendan Rodgers’ men go one point ahead of Aberdeen, who play Hearts at Murrayfield on Saturday.

It was a perfect warm-up for Celtic’s Champions League opener against Paris St Germain at Parkhead on Tuesday night, where they will come in for a much stiffer test than the one presented by the outclassed Lanarkshire side in what was their 4000th league game.

With strikers Leigh Griffiths and Moussa Dembele out injured — both could be back for the visit of the French side — Rodgers gave a debut to 19-year-old French forward Edouard, who is on a season-long loan from PSG.

In an attack-minded 3-4-3 lineup, 20-year-old winger Patrick Roberts, back at the Parkhead club for a second loan spell from Manchester City, was also included with defender Jozo Simunovic and midfielders Armstrong and Callum McGregor back in the team.

The Hoops took control of the game from the first whistle and came close in the eighth minute when James Forrest’s cross from right found Sinclair and his drive was blocked by Accies keeper Gary Woods, who made another stretching save from a Sinclair effort seconds later.

Hamilton were continuously pressed back but could only hold out until the 17th minute when, after a McGregor drive had been blocked, Armstrong picked up the ball and eased into the box before curling a right-footed shot from 16 yards past Woods and into the far corner.

The visitors’ second goal came in the 29th minute after Edouard drove at pace towards the Hamilton box only to be tackled by left-back Scott McMann but the ball broke kindly to the supporting Sinclair and with some assurance he curled it past the despairing Woods.

Moments later, Parkhead keeper Craig Gordon made a decent save from midfielder Ali Crawford but it was only a blip in Celtic’s dominance, demonstrated again when Sinclair hammered in number three from an angle around two minutes before the break, after McMann’s challenge on the Englishman had initially turned the ball against his own post.

Sinclair should have scored his hat trick just after the hour when he raced clear of the Hamilton defence and on to a searching Simunovic pass but he lofted the ball on to the roof of the net.

Still Celtic, slick and assured, kept pressing and in the 64th minute Edouard worked a one-two with Roberts at the edge of the box before going on to slip the ball low past Woods from 12 yards.

Moments later, the Accies defence was cut open again and this time Sinclair’s shot was deflected by McMann on to the post and past for a corner which was cleared.

With a nod towards Tuesday, Rodgers replaced Roberts and Armstrong with Jonny Hayes and Olivier Ntcham which gave the visitors added energy for the final stages, with Nir Bitton coming on for Simunovic.

But it was Gogic who finished the scoring when he headed in a Crawford corner with four minutes remaining.