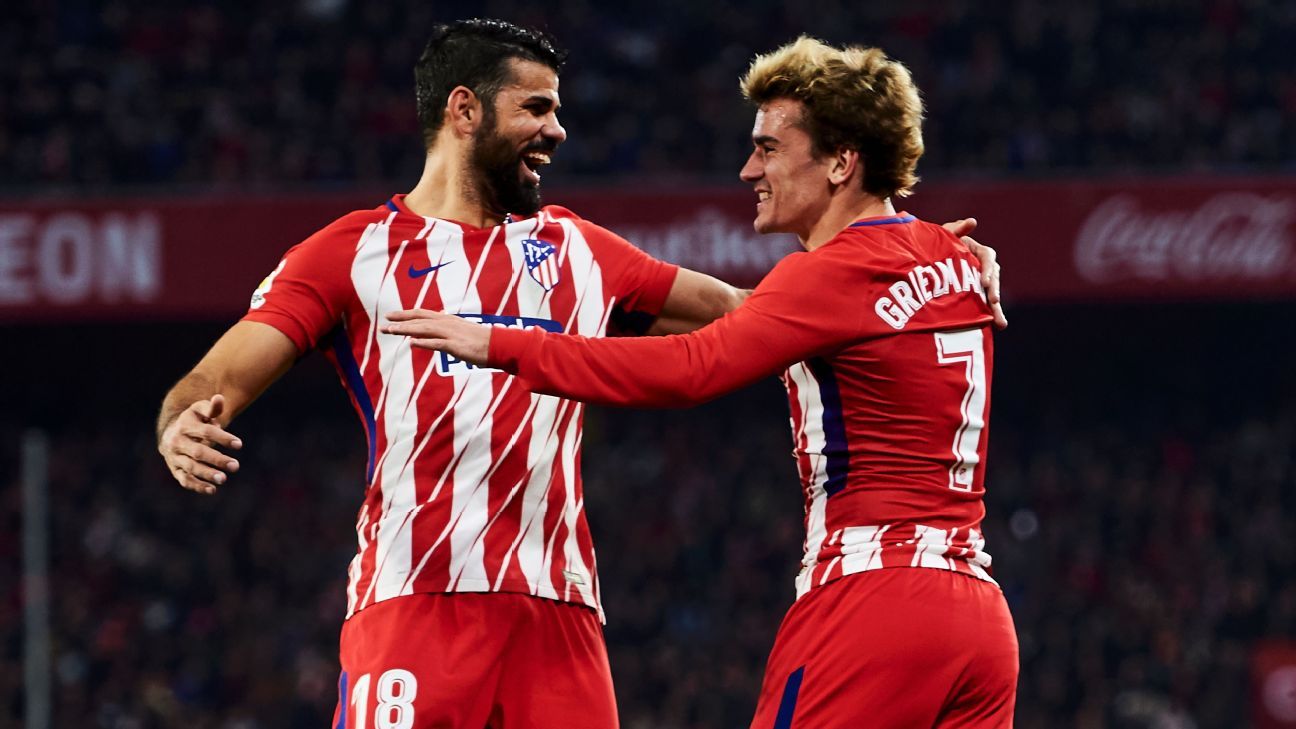 
Inspired performances from hat-trick hero Antoine Griezmann and Diego Costa helped Atletico Madrid to a stunning 5-2 victory and condemn Sevilla to only their second home defeat in 16 months.

While in the end it was comfortable, Atleti were initially under the cosh and things may have been different had Jan Oblak not pulled off a brilliant early stop.

Costa then opened the scoring, while Griezmann netted the pick of his three on the stroke of half-time from outside the box. Koke also got in on the act as Los Rojiblancos ran riot and they were perhaps a bit guilty of getting carried away as they left themselves wide open late on, allowing the home side to score two consolation goals they did not deserve.

The first genuine signs of formidable partnership between Costa and Griezmann were devastating. Plus, Los Colchoneros got their first penalty of the season — it only took 25 games. Hallelujah!

The defence completely switched off for the final 15 minutes, as they did last time out against Copenhagen.

8 — Diego Simeone got his selection spot on, however loses a mark for getting a bit carried away, throwing on forward after forward and encouraging his side to attack, leaving them exposed at the back.

GK Jan Oblak, 6 — Wonderful early save to deny Luis Muriel. Had that gone in, who knows how things would have transpired. Helpless for the goals, however guilty of losing his head late on and should have given a penalty away.

DF Sime Vrsaljko, 5 — Was not as effective as he can be in attack and looked a little shaky at the back, giving the ball away all too often.

DF Jose Maria Gimenez, 6 — Guilty of switching off late on as Sevilla bagged a couple of consolation goals that they had no business scoring.

DF Diego Godin, 6 — Caught out of position for the home side’s first goal. An experienced head should have handled the situation better but appeared to be as caught up in the attacking momentum as anyone.

DF Filipe Luis, 8 — When he marauds down the left flank like he did on Sunday, you realise just how much he has been missed through injury this season.

MF Koke, 7 — Was disciplined in his nominal wide role. Worked tirelessly, as he always does. Will be pleased to have bagged his first goal since August, too.

MF Thomas Partey, 6 — Combative in the middle of the park and excelled during the opening stages when — believe it or not — the game was actually in the balance. With Atleti cruising towards victory, was given the final half hour off.

MF Gabi, 6 — Looked leggy in the final 10 minutes after playing on Thursday, too.

MF Saul Niguez, 7 — Wonderful assist for Griezmann’s hat-trick goal. Best of the midfield lot and was always running beyond the strikers in support of the attack.

FW Antoine Griezmann, 10 — Brilliant. Hit a stunning goal with right foot on the stroke of half-time before showing composure to put away a penalty. Hit the post, scored a hat trick, set up Koke with a brilliant backheel and made a defensive clearance from under his own bar. His best performance of the season.

FW Diego Costa, 9 — The Costa we know and love. Played his role as the pantomime villain to perfection. Was booked early on, dived and rolled around and irked the crowd no end. Did the majority of his talking with his feet, though, showing tenacity and composure to open the scoring and used his nous to win the penalty.

MF Angel Correa, 6 — Forced a decent save from Sergio Rico.

MF Vitolo, NR — Given dogs abuse on his return to his former club, however given the result, can certainly say he had the last laugh. Should have scored on the counter, mind.

FW Gameiro, NR — Guilty of over-complicating things when he should have scored to make it 6-1.