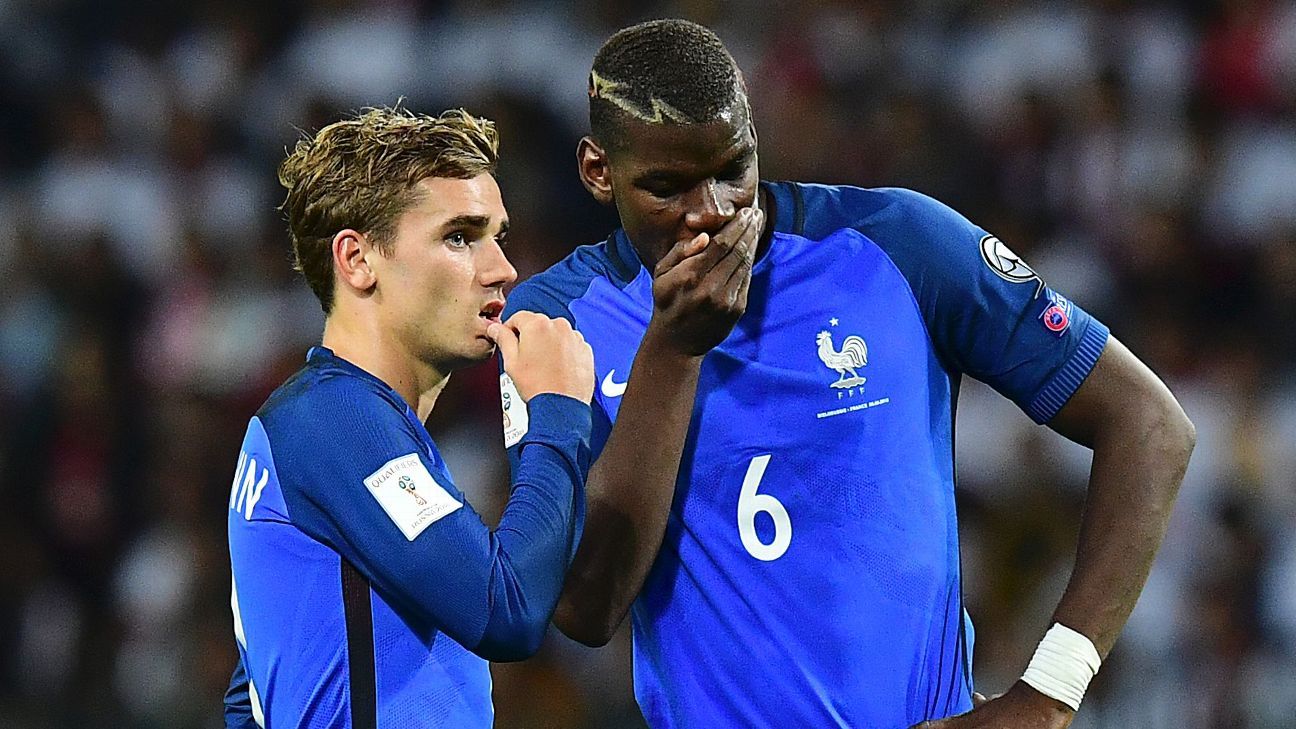 
Paul Pogba and Antoine Griezmann have said they would like to play together at club level — but Greizmann stressed that did not mean he was going to Manchester United.

Pogba returned to United from Juventus in 2016, while Atletico Madrid’s Griezmann was heavily linked with a move to Old Trafford last summer.

The players, preparing for France’s friendly against World Cup hosts Russia in St. Petersburg on Tuesday, told Canal+ they would like to work together as club teammates as well as with their national team.

“If only we could do this every day,” Pogba said, with Griezmann responding: “That would be great. But hey, that doesn’t mean I’m going to go to Man U.”

Pogba added: “The whole year together, winning trophies. I really hope we’re going to do that one day.”

France are among the favourites for the World Cup, but stuttered in qualifying and lost 3-2 to Colombia in a friendly on Friday having held a 2-0 lead.

But Pogba, who played only the last 25 minutes of the match at the Stade de France, urged fans to unite behind them.

“With the squad we have, the atmosphere and the team spirit that there is, I can only think of the best for the World Cup.”

After Didier Deschamps’ side had squandered the advantage given to them by Olivier Giroud and Thomas Lemar inside 26 minutes, Giroud said they needed to be stronger.

“The problem was in our heads, not in the tactical set-up,” he said. “We lacked character. You have to be strong in your head to be able to turn around any situation or hold on to the scoreline.

“In the teams in which I have played, there have always been several leaders who showed the way to go on the pitch.

“We mustn’t get carried away because we made a mess of one half, and call everything into question.

“It’s more a problem of attitude, of slackening off than the lack of a leader. It’s true we don’t have a player who barks at us, but we have a lot of leaders in terms of technique.”

Meanwhile, Griezmann’s Atletico teammate Lucas Hernandez made his senior debut for France when he came on 14 minutes from time having opted to represent them rather than Spain, where he has lived since the age of four.

“I’m proud to be a Bleu and wear this shirt. I’m going to defend it to the death,” he said. “I’m a very ambitious player — those who know me know what kind of a person I am. It’s true I hadn’t had any news from France.

“Personally when the coach called me to ask about my situation and what I was going to do, I didn’t hesitate a minute.

“I told him immediately that I was ready to defend this shirt. When you don’t get any news, when you don’t know anything, it makes you think of things, but when the coach calls you, when you’re told you’re being counted on, there’s nothing to think about.

“When I say Spain has given me everything, personally and in football terms, it’s true. When I say that I speak Spanish better, that’s true too. But that doesn’t change the fact that France is my country.”