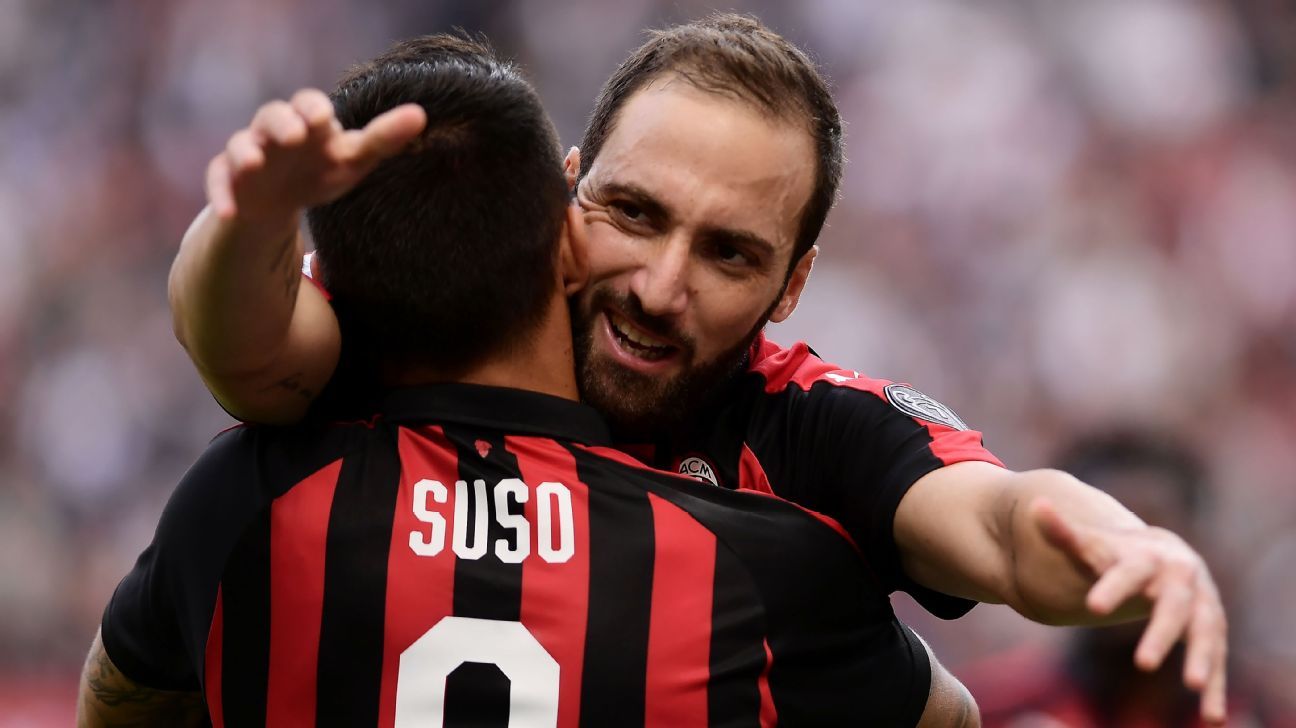 
AC Milan continued their fine form in front of goal on Sunday as they secured a 3-1 win over Chievo at the San Siro. A double from Gonzalo Higuain and Giacomo Bonaventura’s deflected effort sealed the victory, ensuring the Rossoneri are now unbeaten in their last eight games in all competitions. They’ve also scored 10 goals in their last three outings.

The clinical edge that was missing during a frustrating run of results has been found and it’s essentially turning draws into wins. Milan looked in control and comfortable for the most part on Sunday, and they had an end product to ensure that it was as straight-forward as many predicted.

Yet again, the Rossoneri failed to keep a clean sheet and that will be a huge annoyance for the backline. It was a poor goal to concede and it could be argued that it stemmed from the fact the players got too comfortable with their lead and became too passive in possession, with a mistake leading to the goal.

7 — Gennaro Gattuso ensured his side had the right approach, particularly in the first half, as they put pressure on Chievo high up the pitch and found space in the final third to find those key breakthroughs. Looks to now be pairing good football with results.

GK Gianluigi Donnarumma, 6 — Aside from a shaky moment or two playing it out from the back, he had very little to do throughout the game but dealt with crosses into the box well when called upon.

DF Ignazio Abate, 6 — Chievo seemed to be targeting Milan’s right flank and that was largely due to the fact that the defensive stalwart can be a liability. Defended well for the most part but was caught out at times and wasn’t particularly impressive with his distribution.

DF Mateo Musacchio, 6 — Defended resolutely throughout and never hesitated in bringing the ball out from the back to start attacking moves. Also deserves credit for adapting to his new defensive partner with captain Alessio Romagnoli ruled out through injury.

DF Cristian Zapata, 6 — With two games in the space of four days, the experienced Colombian international is proving his worth. Moments of concern, but for the most part he defended well and gave Milan the platform to go out and win.

DF Ricardo Rodriguez, 7 — Seemingly growing in confidence on the ball, Rodriguez is starting to impress. Always puts in a shift defensively to help keep things tight at the back, but it’s positive to see him attack with purpose and not be afraid to push on and create an opportunity for his teammates.

MF Franck Kessie, 6 — Switched off in the build-up to the Chievo goal, and so must work on those situations as well as his finishing. Nevertheless, as Milan come to expect from the combative and tireless midfield ace, he worked his socks off to gain a foothold in the game.

MF Lucas Biglia, 7 — Got a little sloppy in the second half but made countless interceptions and tackles to provide a steady defensive shield in front of the backline. While he did keep it mostly simple, he continued to keep Milan ticking in midfield and was crucial in the victory.

MF Giacomo Bonaventura, 7 — Making his 150th appearance for Milan, he celebrated with a well-taken goal even though his shot from distance took a deflection. Was a constant threat in the first half in particular with his runs into the box, and showed that bit of courage and quality needed to find a key goal.

FW Suso, 8 — Decisive display, as he provided two assists for Higuain and continued to be the main threat for Milan. Can be criticised for his lack of consistency, but he has been in fine form in recent weeks and he’ll hope that continues after the international break against Inter.

FW Gonzalo Higuain, 8 — Proves what a difference a world-class striker can make to a side. Took his two goals ruthlessly as he didn’t hesitate and buried both opportunities, while he dropped deep at times too to help link up play. He’s the missing piece Milan needed and his goals will continue to be crucial: that’s now six goals in seven games in all competitions this season.

FW Hakan Calhanoglu, 6 — Was a threat at times and was unfortunate not to get on the scoresheet himself, but a little too sloppy in his overall play as he often gave possession away cheaply. Nevertheless, played his part in the win with his defensive work too.

FW Patrick Cutrone, NR — Provided Milan with a lift in the latter stages with his burst of energy and presence up top to keep the pressure on the Chievo backline.

DF Diego Laxalt, NR — Fresh pair of legs at left-back to finish the game to offer a little more energy on that flank.

FW Samu Castillejo, NR — Minimal time on the pitch to make an impression as he afforded Suso a late rest as he looked to be struggling with a slight ankle twist.