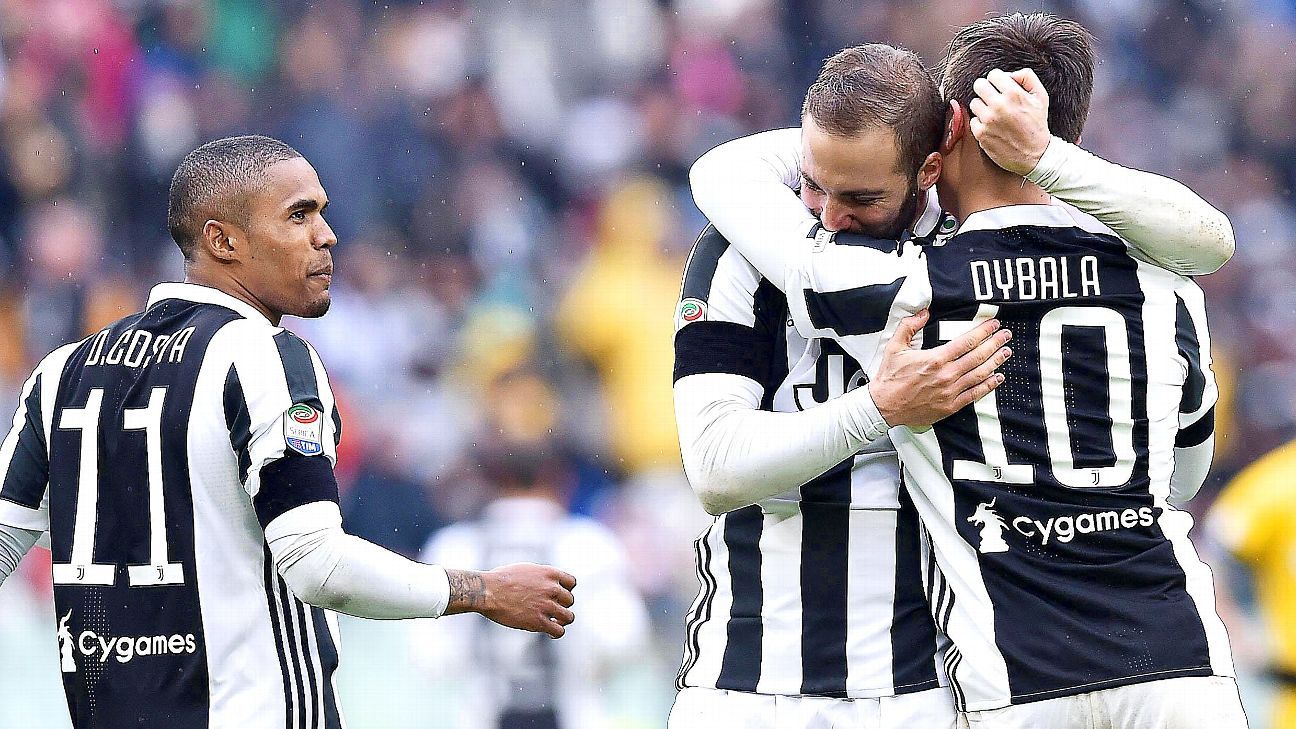 
Juventus didn’t need to play their best to beat Udinese 2-0 at home and to climb to the top of the Serie A table.

Udinese started the game by attacking and hoping to take advantage of a tried Juve side. However, game management has proven to be the Bianconeri’s secret weapon. By containing their opponents well, Juve showed quality in spurts before taking control of the match and gaining a mental and physical advantage. Udinese seemed to accept defeat earlier than they should have, struggled to impose themselves, and allowed Juve to walk away with another three points.

The understanding between Gonzalo Higuain and Paulo Dybala is proving magical as their combination made the difference against Tottenham Hotspur earlier this week and again today against Udinese. Working hard and acting like a complete striker to unleash Dybala, Higuain is proving himself vital for Juve’s attacking play while La Joya is back to his visionary and clinical best.

Another missed penalty for Higuain. Between him and Dybala, Juventus struggled to make the difference from the spot and it’s time to hand those opportunities to a more clinical player who can withstand the pressure of the moment.

6 — Massimiliano Allegri’s side continue to churn out the necessary results as all their opponents and rivals fall away. Capable of handling the pressure and an extraordinarily emotional week, his squad know how to give just enough to collect all three points.

DF Mattia De Sciglio, 7 — Excellent on Sunday despite being visibly emotional at the start of the game. His dribbles, his passing, his offensive pushes all show that the player is proving valuable for the team. Defensively excellent.

DF Daniele Rugani, 6 — Attentive and reliable at the back. Suffered in a physical sense but showed character.

DF Giorgio Chiellini, 6 — Always susceptible to a maddening act of aggression that resulted in an early yellow card but proved authoritative and capable thereafter.

DF Kwadwo Asamoah, 6 — Struggled at times to contain Silvan Widmer but proved capable in both phases of the game. His control of the ball could be better, but he is showing more courage in his game and proving important to the balance of the side.

MF Sami Khedira, 6 —  Khedira is most effective when allowed all the time and space in the world.

MF Claudio Marchisio, 7 — He many not possess Miralem Pjanic’s ingenuity on the ball but he certainly boasts accuracy. Didn’t miss a single long ball and showed precision in possession. Intelligent with his use of the ball but, then again, he wasn’t truly challenged the way his Bosnian teammate has been.

MF Stefano Sturaro, 6 — His accuracy on the ball certainly needs a little help but he does try to utilise his strengths well.

FW Douglas Costa, 7 — When he has the ball, he lights up the pitch with his pace, dribbles and accelerations. Still needs to make his mind up on what he wants to do quicker. He continues to be a handful to deal with and a threat.

FW Gonzalo Higuain, 7 — The manner in which he has developed into a complete striker is worthy of a thousand compliments. Knowing how to hold up the ball, how to keep defenders at bay and how to create space and opportunities for his teammates makes him invaluable. If only he could convert penalties.

FW Paulo Dybala, 8 — How much we have missed seeing a performance worthy of Dybala’s real talent. Putting on a real show, he scored a fine free kick, won Higuain’s missed penalty, scored the second and nearly managed one more. Extraordinary on the day with his ingenuity and efficiency. Welcome back.

MF Blaise Matuidi, 6 — Came on to provide his usual energy in midfield and help keep control of the game.

FW Mario Mandzukic, N/A — Didn’t have a chance to make an impact in a game that was already won.

MF Rodrigo Bentancur, N/A — Came on for only a few minutes.