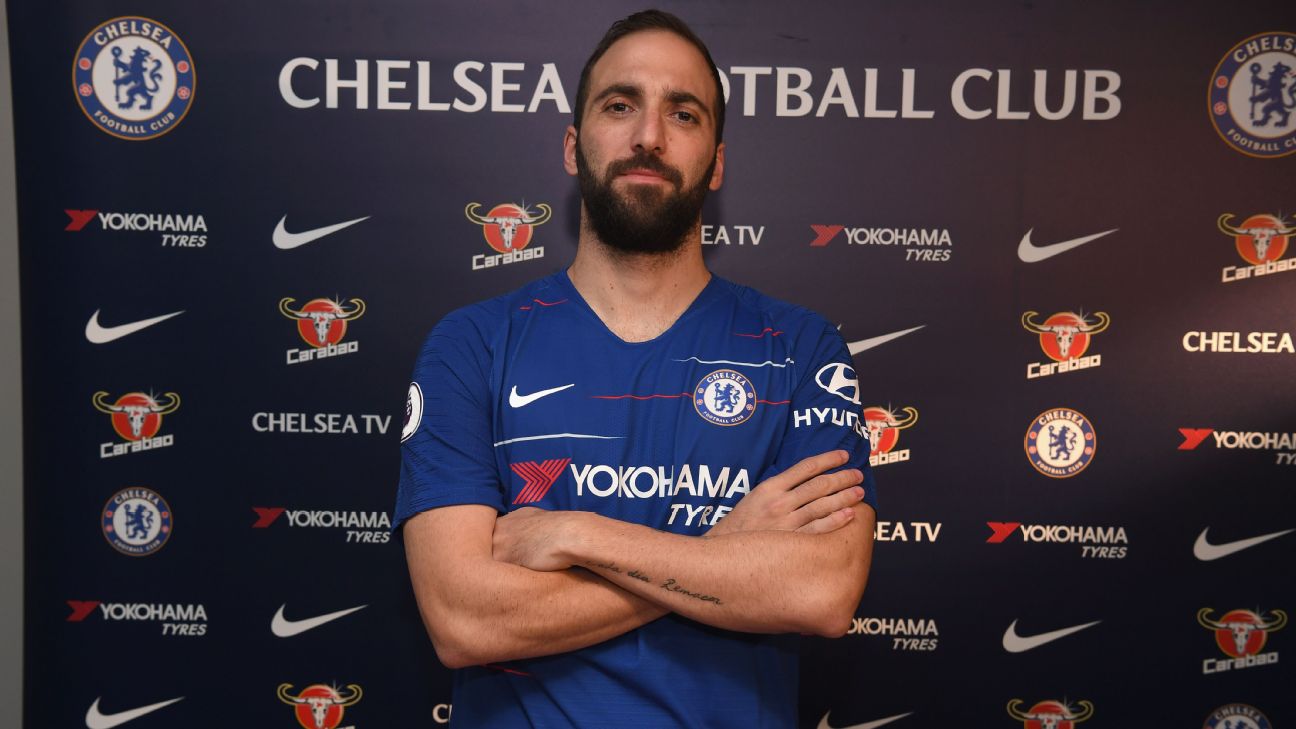 
LONDON — Gonzalo Higuain has joined Chelsea on a six-month loan, with the club having an option to make the deal permanent next summer if he proves a success at Stamford Bridge.

“When the opportunity to join Chelsea presented itself I had to take it,” Higuain, who will wear the No. 9 shirt, told the Chelsea website. “It’s a team I’ve always liked that has a lot of history, a wonderful stadium and they play in the Premier League, a league I’ve always wanted to play in.

“I now hope I can give back that trust Chelsea have shown me out on the pitch. I can’t wait to start and I hope to adapt as soon as possible.”

Welcome to London and welcome to Chelsea, @G_Higuain! 🙌#HiguaIN pic.twitter.com/DMJN7z8YOL

Higuain completed his move on Wednesday after he underwent a medical to finalise the details of the loan. The Blues have an €18 million option to extend the loan for next season or €36m to sign the Argentine permanently, to be paid over the course of two years.

Sarri had to convince Chelsea that Higuain, 31, was the right man to replace struggling Alvaro Morata — who is expected to join Atletico Madrid on loan — in light of a disappointing six-month stint at AC Milan, which saw him score eight goals in 22 matches and net just once in his final 12 appearances.

Higuain has also developed a reputation for being emotionally fragile, as well as failing to deliver in big moments as a result of crucial misses in the World Cup and Copa America finals for Argentina, but Sarri is adamant his new striker can make a big impact.

“He wants to win all the time and, in the last five years, he’s only lost his temper twice: with Napoli against Udinese, and with Milan against Juve,” Sarri said. “It’s only because he wants to win. As for failure, he’s still scored [eight] goals in a team that isn’t at the same level as Juventus. I wouldn’t call it failure.

“He played four seasons for Real Madrid, I think. I think he has the right experience to play here.”

Higuain has only played 130 minutes of competitive football in 2019 and scored one fewer goal than Morata in all competitions this season, but Sarri believes he will show his true pedigree in front of goal at Chelsea.

“We hope he brings goals, that he starts scoring for us,” Sarri added. “He’s also very good at other aspects, other than just goals, but that’s what we are hoping for. He has had some difficulties recently, but we’re hoping we can raise him back to his best form.

“He’s a very strong striker. Especially in my first season in Naples, he did very well. He scored 36 goals in 35 matches in Serie A. That season he scored 38 goals. So he did very, very well. For sure, he is one of the best strikers in my career.

“I think the club agree with me when I told them my opinion about [how to improve] the team. So the January market is very difficult, especially for a striker. It’s very difficult in January to find one of the most important strikers in the world, so the club is working very well.”

Sarri confirmed that Chelsea missed a deadline to register Higuain for Thursday’s second leg of the Carabao Cup semifinal against Tottenham at Stamford Bridge, meaning his Blues debut is likely to come in the FA Cup against Sheffield Wednesday on Sunday.

Chelsea are looking for a reaction without their new striker against Spurs after Sarri publicly accused his players of being “extremely difficult to motivate” in the wake of Saturday’s limp 2-0 defeat against Arsenal, and the Italian called upon Eden Hazard to step up.

Sarri also dismissed the suggestion that Hazard is being wasted as a false No. 9.

“He’s an instinctive player,” Chelsea’s head coach said. “For him, it’s very difficult to play only in one position. He likes very much to go to the ball, in the direction of the ball. He wants the ball at his feet.

“So it’s very difficult for him to play as a striker, but also as a winger. We have to organise the other 10 players in the defensive phase because he needs to play everywhere on the pitch.”