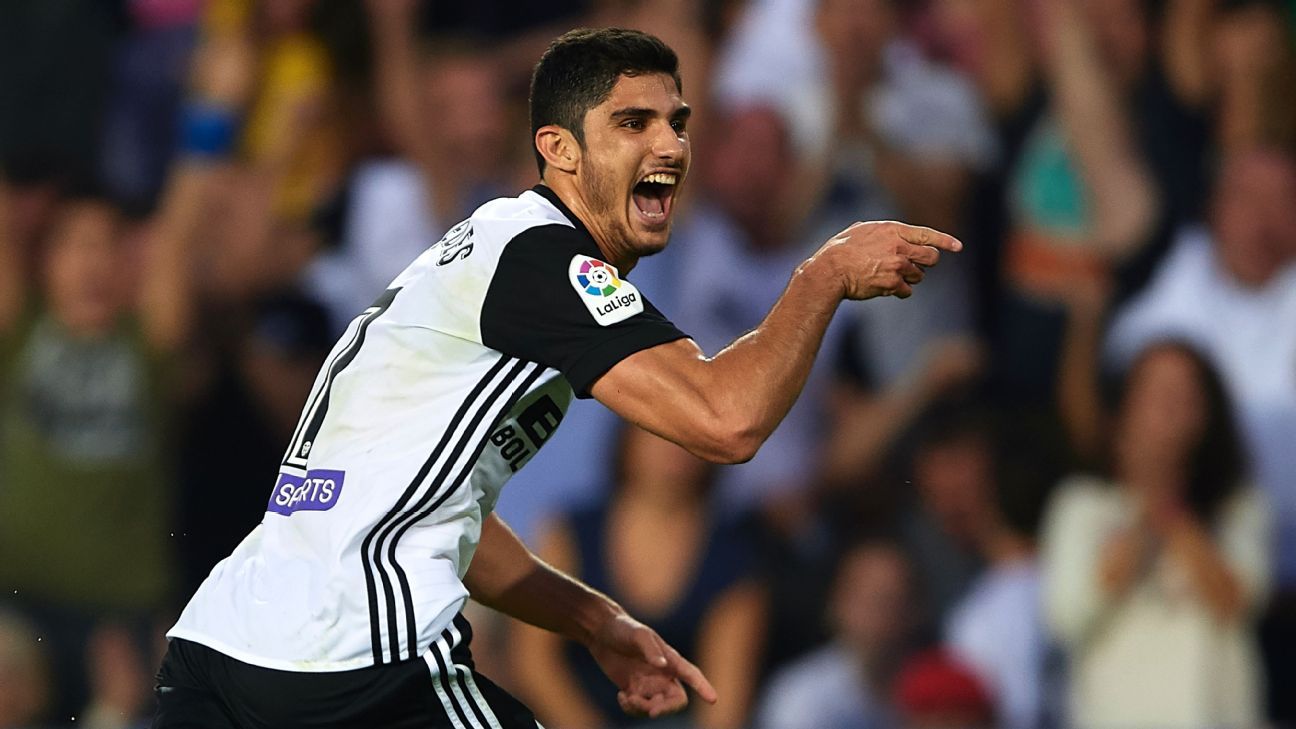 
While you’d need to be a certified idiot to deny that Kylian Mbappe is a worthy winner of the Golden Boy award, which delineates the best young starlet in world football, the fact that Goncalo Guedes didn’t even make the long list for that prize is, simply, an embarrassment.

Right now the phenomenally powerful and thrilling 20-year-old Portuguese attacker is producing a level of magical football for Valencia so utterly sensational that he looks like a future Ballon d’Or winner. In fact, if you compared his form right now against Cristiano Ronaldo, the surefire winner of that bauble come January and also the guy who held the FIFA Best award in London on Monday, it’d be the younger Portuguese who’d win the vote of every single judge.

Ronaldo would probably vote for Guedes himself.

This streak of lightning in football boots is one of those players who, when you’ve watched him slash defences to shreds and score with industrial power or assist with cold-blooded, clinical ease, makes the problems of the world disappear temporarily. He is football.

A young buck, loaned out by Paris Saint-Germain because of their log-jam of talent, who is probably the most exciting, dramatic and uplifting footballer (not named Lionel Messi) anywhere in La Liga. That’s how good he is.

Take the goal with which Guedes broke Sevilla’s spirit at the Mestalla on Saturday, and set in train a 4-0 thrashing. If you haven’t already seen it it will thrill you. If you’ve seen is a dozen times it’ll still thrill you in 30 more viewings. Go seek it out, I beg you.

A delicate Rodrigo flick taken on the run, but scooped up from almost behind him while in full flow because, right now, Guedes can do anything. Then a searing dash towards the Sevilla goal, which looks like a clear opportunity to finish one-v-one against Sergio Rico.

Instead, Guedes allows Simon Kjaer to catch up, shapes to shoot off his left foot and the Dane not only buys a ticket but the entire box office too and slides in with a desperate lunge as Guedes stops stock still to watch the defender shoot past him on the turf. It’s a bit like the Road Runner and Wile E. Coyote.

As Guido Pizarro arrives at the scene of the crime, Guedes cuts inside him, leaving the Argentinian off balance and bamboozled before lashing a heat-seeking shot into the left-hand postage-stamp corner of Sergio Rico’s goal.

Born in Benavente, approximately an hour north of Lisbon, reared at Benfica, snapped up by PSG after he ran them ragged in the UEFA Youth League and now at Valencia because of the good relationship between his agent Jorge Mendes and ownership at the Mestalla, Guedes is a guy who is seeing the ball as big as a paycheque right now.

He plays with the belief that he can do anything he wants when the ball’s at his feet: dribble past players, race beyond them, produce spectacular one-two passes to rip apart marking schemes, score with power, score with daring, finish with total sangfroid as if he were a 28-year-old centre-forward who’s won every club and international prize going.

Guedes is dynamite. On this form he’d walk into any team in the world. Yes, including Manchester City, Real Madrid, Barcelona or … PSG.

It’s well within the scope of this uplifting story to discover that after being spotted by Benfica’s infamously productive youth academy, he scored all five goals in a 5-0 win on his youth team debut aged just eight. Against 11-year-olds. His progress, from then, was stellar.

By the time the UEFA Youth League was instituted in 2013, when he was still just 16, it was catnip to his big-time sensibilities.

Playing then off the right wing, until recently his preferred position, and as usual playing with and against footballers a couple of years older than him, he was the rising star of a side that went all the way to the inaugural final against Barcelona. En route they destroyed PSG (scoring five times across two games), put six past Anderlecht, won away to Manchester City (Guedes scoring) to eliminate the richest club in the tournament and then drew Madrid in the semifinal.

While Benfica lost to Munir El Haddadi’s Barcelona in the final, a star had been born.

Within a few months, Guedes was given his Champions League debut by Benfica coach Rui Vitoria. Guedes played well enough in 90 minutes at home against Astana to be given a big chance, away to Atletico Madrid on matchday 2.

Remember now: this was the Diego Simeone Atletico that would go on to knock out Barcelona, eliminate Bayern Munich in the semifinal and only lose the 2016 Champions League final to Madrid on penalties.

Guedes drove Atleti left-back Filipe Luis to distraction that night, twisting and turning him, outrunning him, showing a daring and a confidence that made Simeone say, after a 2-1 defeat: “I really like the way that kid Guedes plays.” A defeat that came courtesy of this prodigy nicking in at the back post to calmly tuck away a Nico Gaitan cross for 2-1, making him the youngest Portuguese (at 18 years and 308 days) to score in the Champions League.

One of the things that is tantalising about his play at Valencia is that even though he’s taken both Los Che and La Liga by storm, there’s no question that we’ve only seen about 40 percent of the Magic Guedes Show.

While at Benfica he was regarded as a right winger, predominantly ready to set up assists off his favoured foot. But when Jonas, Benfica’s ex-Valencia No. 1 striker was badly injured, Guedes began to be trained as a “false nine” central forward.

Fast-forward to the first few Ligue 1 matches the young Portuguese played for Unai Emery after his €30 million move to PSG and the benefit of that experience is obvious.

The first time Guedes left his mark on a PSG goal it was, typically, a flash of magic out of the blue. On the pitch as a substitute for Lucas Moura for fewer than 60 seconds, the Portuguese danced through the middle of the Bastia defence, like the most fleet-footed central striker, before setting up Edinson Cavani for the decisive 3-0 score.

“I’m certainly more accustomed to playing as a right winger but I love it on the left too; as far as operating as a striker, I’ll play wherever the coach tells me to and I’ll try to improve in all the positions too,” was Guedes’ touchstone phrase. “I think it’s important to dominate two or three different roles because there’ll be times in a game, tactically, when you have to switch and offer a different kind of threat. But I’m always at the coach’s disposal.”

He comes from a family committed to his success.

When the almost daily commute from home to Benfica’s youth academy in Lisbon began to burn out the cars his dad, Rogerio, would drive, there wasn’t a fuss made. But sacrifices were made in order to buy another one and restart the pilgrimage for him and his older brother Joao, a goalkeeper.

“My dad tells me he did about 60,000 kilometres on average every year while I was growing up, driving me and my brother to Benfica, but I was young and not paying attention,” the privileged son says now. “Now that I’ve realised the dream that I yearned for from when I was extremely young, I think he’s satisfied and proud of me. But my father was a very, very important person in my life because he believed in me. So I’ll keep working in order to improve and repay him.”

In fact, so focussed on progression was young Guedes that he was unaware of the impact he was having.

“The old guys in my neighbourhood tell me that I’d dominate local games against kids three or four years older than me, but I was just playing,” he says. “I wasn’t aware of all that and I only know this fact because they regale me with stories about it when I go home.”

Forced to continue his progression at Valencia, where he’s now produced three goals and five assists in five starts, he took advice from international teammates and former Valencia starlets Andre Gomes and Joao Cancelo about the club and the city. He was told, instantly and firmly, that it was the right place for him and that things under new manager Marcelino were going to go from good to better. So it has been.

But the queue of talent at PSG — Javier Pastore, Adrien Rabiot, Julian Draxler, Kylian Mbappe, Neymar, Dani Alves, Lucas and Angel Di Maria — all of whom in one way or another blocked a multi-positional 20-year-old from getting sufficient game time, won’t be there forever. And there’s no way on God’s green earth that PSG can allow their 24-karat talent to produce his magic for another club for too long.

La Liga aficionados better enjoy him while he’s here. Short term, he’ll dazzle you every time you take time to watch him and his sensational, attacking Valencia side this season. Long term, this is a guy over whom the world’s leading clubs will be fighting, desperate to tempt him to bigger and more historic pastures than even mega-rich PSG.

As I said, if this form not only continues but improves with experience and wisdom then, folks, we are looking at a Portuguese who looks equipped to fight for the Ballon d’Or that only three men from his nation — Eusebio, Luis Figo and Ronaldo — have ever held aloft before.

Find his games. Watch him. You’ll thank me, I promise.