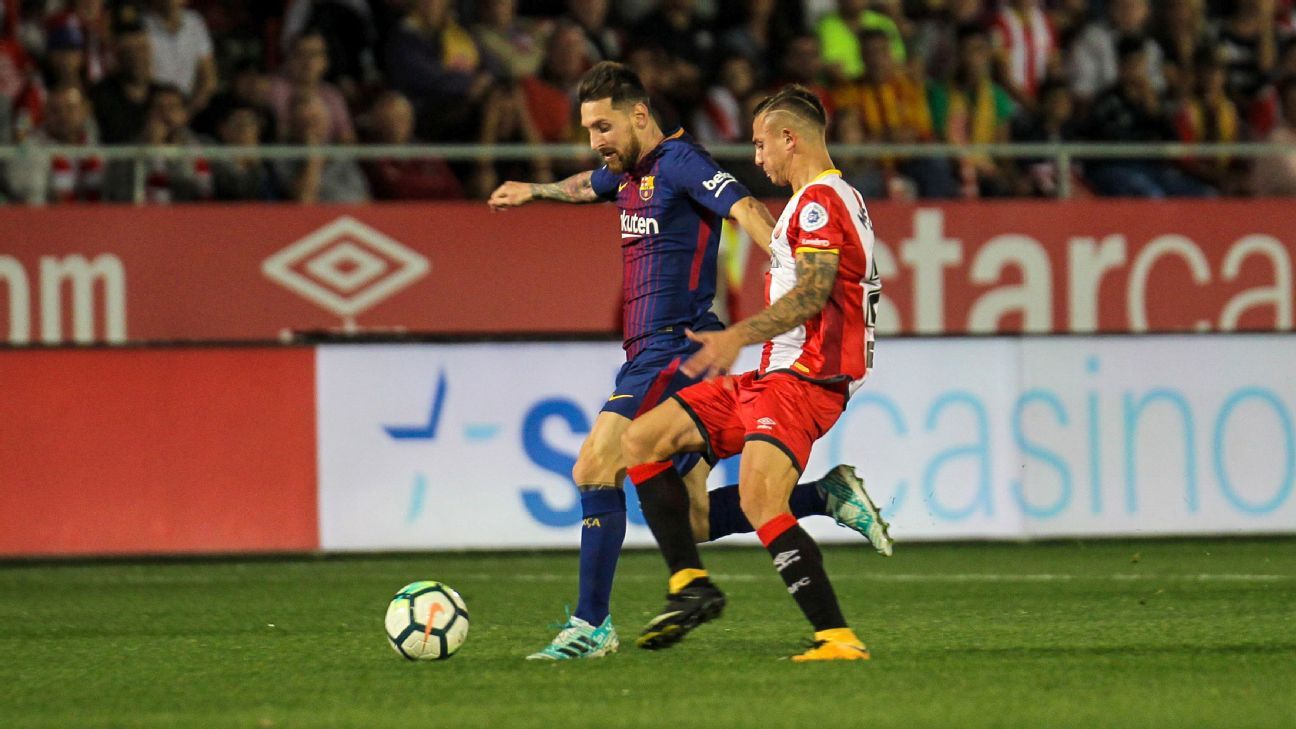 
MONTILIVI, Girona — The buildup to Barcelona’s 3-0 win against Girona on Saturday was dominated by politics. But, even though he didn’t score, the focus after the match was all on Lionel Messi. For the week before, it had been on Catalan independence.

This was the first time these two Catalan cities, separated by 100 kilometres, had ever met in Spain’s top flight. Barca have played six fellow Catalan sides in the Primera Division — Espanyol, Europa, Sabadell, Gimnastic, Lleida and Condal — but never Girona, who were promoted in the summer.

That the match fell at the end of a week in which tensions had risen over Catalonia’s desire to hold a referendum on independence added to a unique atmosphere. A huge flag saying “Welcome to the Catalan Republic” was hung outside Montilivi, while both sets of supporters united in chants of “Independence” and “We will vote” before, during and after the 90 minutes.

However, once the dust had settled on Barca’s 3-0 win, which extended their 100 percent start to the season to six games, the spotlight was once again on Messi.

Pep Guardiola, who coached the Argentine for four years at Camp Nou, was quoted in 2015 as saying that “there is not a system or coach to stop talent of Messi’s magnitude. The way he has been playing over the past four or five months, you cannot stop him. He is too good.”

Messi went on to dismantle Guardiola’s then Bayern Munich side in a Champions League semifinal, but the coach’s point has proved relevant this season, too, with Messi scoring nine goals in his first five league games.

Yet Girona did stop him. They didn’t manage to stop Barcelona, but they stopped Messi by employing a man-marking system on the No. 10.

“We lost so I’m not happy, but we managed to minimise the input of the best player in the world,” said Girona manager Pablo Machin in his postmatch news conference. “I don’t think Messi was the decisive player that he can be.”

Cartoon from Spain on Pablo Maffeo’s man-marking job on Lionel Messi yesterday in Girona vs Barcelona. “Honestly Maffeo, the game is over.”😂 pic.twitter.com/WL2gKMiyXL

Machin’s tactic was to stick Pablo Maffeo on Messi. Almost literally. The Manchester City loanee, still just 20, did not leave Messi’s side until he was substituted in the 78th minute, prompting a cartoon in one Spanish publication of him in bed with Messi and his wife Antonella Roccuzzo on Saturday night.

“Messi said to me: ‘I’ve got you here for the whole game, haven’t I?'” Maffeo revealed after the match, adding that the Barcelona No.10 also asked him if he was on loan from Man City and how old he is.

It’s perhaps a testament to the performance of Maffeo that Messi took such an interest in him.

It’s also a testament to Maffeo, who stood outside Girona’s Montilivi home talking to supporters and posing for photographs until well after midnight, that so much of the reaction to Barca’s win focused on his man-marking job.

After all, it’s not the first time it’s been done. In fact, in the 2015 Copa del Rey final, Barca coach Ernesto Valverde, then in charge of Athletic Bilbao, asked Mikel Balenziaga to do the same thing. It didn’t have the same effect, though, as Messi scored a stunning solo goal and the Blaugrana picked up their second trophy on route to the Treble.

Valverde knows a thing or two about man-marking Messi, and the coach said after the game that Girona’s tactics were not entirely unexpected.

“You always contemplate these possibilities because the opposition look to use what weapons they can,” he explained. “It’s true that when you’re man marked it can be uncomfortable, but it also has advantages — not for Messi, but for the team.”

In the past, that would perhaps have meant huge advantages for Neymar. But with the Brazilian gone to PSG and Luis Suarez — despite his goal against Girona — not in top form, the dependence on Messi seems as great as it has been in a long time.

The flip side is, in Valverde’s words, that Barca have become more of a team, a well-organised unit that is no longer reliant on a brilliant front three but attacks and defends together.

But Machin felt Barca rode their luck on Saturday. And they did. The first two goals were own goals and Suarez’ clincher came with Girona — who had 12 shots to Barca’s eight — chasing the game. Marc-Andre ter Stegen was the busier of the two goalkeepers, making a number of good saves.

Against a better side, in the Champions League for example, Maffeo’s man-marking job on Messi may have led to a more positive result.

And you got the feeling after the game that Valverde knew that, too. Results have been good since the Spanish Super Cup defeat to Real Madrid (seven wins in a row) and confidence is on the up, but Barca haven’t always convinced, despite racking up some heavy, albeit flattering, results.

Valverde’s feet are on the ground, though. He’s right when he says man-marking Messi creates advantages elsewhere on the pitch, but Barca failed to really maximise those advantages at Girona. They will need to be better prepared the next time a team is successfully able to nullify the threat of their best player.