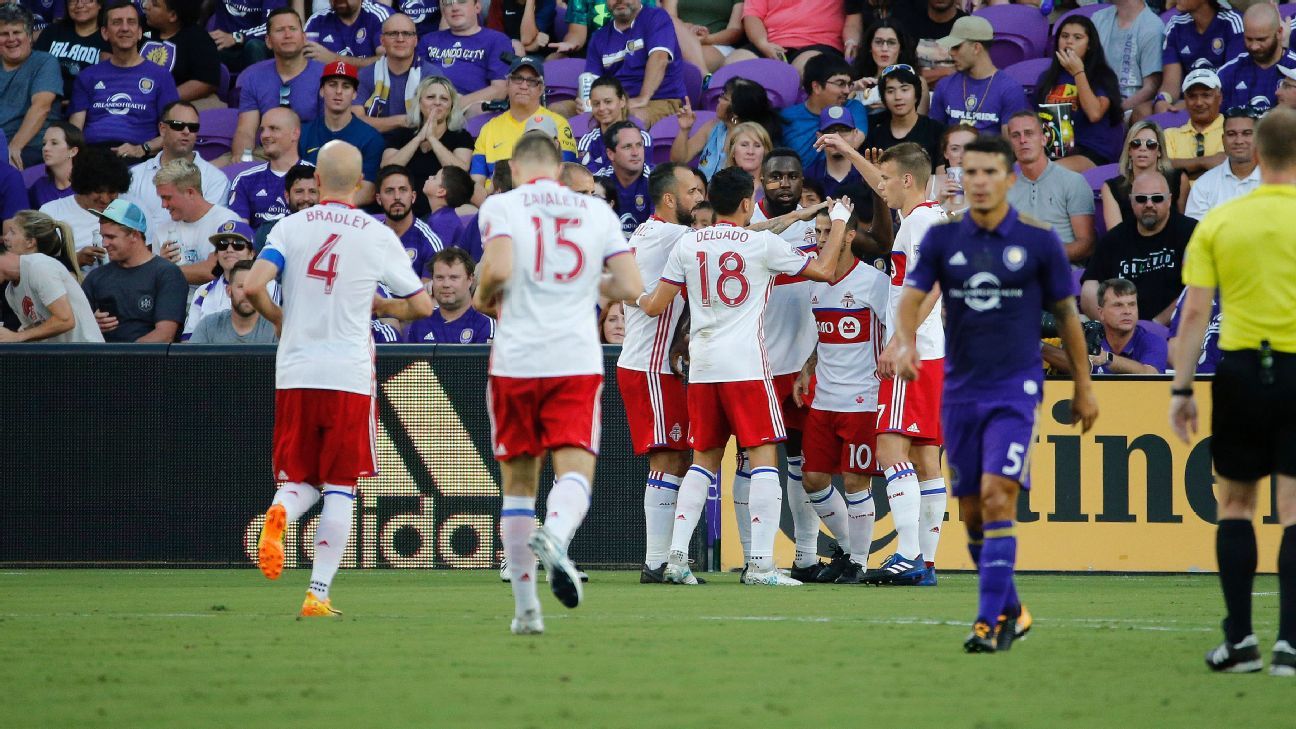 
Sebastian Giovinco had a hand in all of Toronto FC’s goals in a 3-1 win against Orlando City in Wednesday night Major League Soccer action.

Toronto’s talisman Giovinco set up Jozy Altidore with a well-worked bit of interplay and the U.S. national team striker left no doubt on the finish, firing between the legs of Joe Bendik for his eighth goal of the season.

Just after the break, Altidore turned provider, hesitating after being played in on goal and laying off delicately for Giovinco to chip home past Bendik to put Toronto up 2-0.

Carlos Rivas clawed one back for the hosts in the 63rd minute, firing home from left side of goal after a Kaka through ball beat five Toronto defenders.

But Giovinco was irrepressible on the night and he quickly had Toronto’s two-goal lead restored with a curling free kick that found the top left corner and left Bendik no chance.

The win puts Greg Vanney’s team on 38 points as they battle the Chicago Fire for top spot in the Eastern Conference.

There was no shortage of drama in the New York Red Bulls 3-2 comeback win against the New England Revolution in Foxborough, Massachusetts, as Gonzalo Veron scored in the 90th minute to give his team the victory.

Teal Bunbury got the scoring going just after the 20-minute mark, slotting home from a tight angle after Diego Fagundez set him up with a blazing solo run down the left flank that turned the Red Bulls defense inside out.

The visitors wasted no time getting back on level terms minutes later, with Bradley Wright-Phillips smashing home a spectacular first-time volley after the Revs had given the ball away in their own defensive third.

The flurry of goals continued as Fagundez got free with some fancy footwork to force a save from Luis Robles, but the New York keeper only got a fingertip on the ball and deflected it right to Lee Nguyen at the back post and he finished with a cheeky, close-range chip to make it 2-1.

New York leveled early in the second half from the penalty spot after Sean Davis drew a clumsy foul from Gershon Koffie in the box. Daniel Royer stepped up and sent Alex Bono the wrong way to make it 2-2.

With full-time approaching, Felipe set up substitute Veron with an inch-perfect through ball and the Red Bulls’ No. 30 fired a shot past Bono to the far post to seal the win for New York.

The three points sees Jesse Marsch’s team stay well within touching distance of MLS’s playoff places and sends the rival Revs the opposite direction toward the bottom of the table.

Andrew Wenger scored in the first minute against his former team and the Houston Dynamo cruised to a 3-1 victory over the Montreal Impact.

Wenger scored the third-fastest goal in team history at 56 seconds. Mauro Manotas played a short corner kick, got it back and crossed it to find Wenger’s head.

Alex made it 2-0 in the 23rd minute. He took a pass from Manotas, dribbled in space and sent a shot from distance inside the near post. Memo Rodriguez scored his first MLS goal in the 67th minute for a 3-0 lead. A deflected ball fell to his feet at the penalty arc and he sent it in.

Michael Salazar scored for Montreal in the 89th with a volleyed goal. The Impact only had two shots on goal.

Yordy Reyna scored on a header in the 88th minute to lift Vancouver past New York City 3-2.

Fredy Montero and defender Jordan Harvey also scored for Vancouver in the game that had eight yellow cards, five to the Whitecaps. David Villa, on a penalty kick, and defender Maxime Chanot scored for New York City.

Reyna, playing his first game in Vancouver after missing most of the season with a broken foot, scored his first goal of the year when he directed a cross from fullback Jakob Nerwinski past goalkeeper Eirik Johansen.

Harvey tied it in the 54th minute with a left-footed shot.

Sebastian Blanco scored in the 70th minute and Portland salvaged a 2-2 draw against Chicago.

The Fire are undefeated in 11 games, winning nine times. The tie ended Chicago’s four-match winning streak and dropped the Fire a point behind Toronto FC for the Eastern Conference lead. Last season, Chicago had seven total victories and an MLS-worst 31 points.

Fanendo Adi opened the scoring for the Timbers on a penalty kick in the 24th minute, and Arturo Alvarez tied it 10 minutes later.

Defender Brandon Vincent got his first goal of the season early in the second half to give the Fire the lead before Blanco took a pass from Diego Valeri and slotted the tying goal past goalkeeper Matt Lampson.