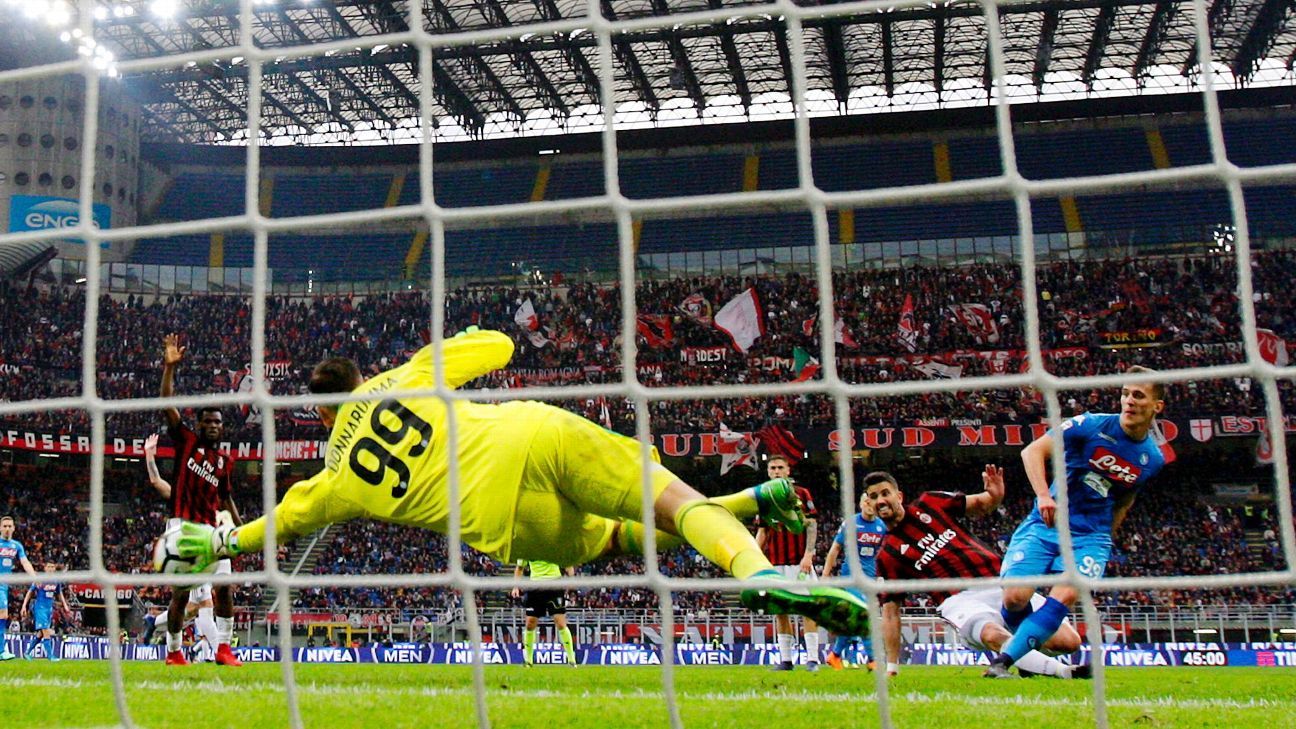 
AC Milan picked up a point in an entertaining goalless draw with Napoli at the San Siro on Sunday, with Gianluigi Donnarumma’s stunning injury-time save securing a draw. The Rossoneri had their moments, as did the visitors, but ultimately, neither could find a breakthrough.

It was clear that Milan still aren’t at the level of Maurizio Sarri’ s title challengers, but without Leonardo Bonucci and Alessio Romagnoli, they defended well and gave a great account of themselves. Organised, determined and positive in their play, it was a good performance overall despite the absence of a goal.

Sunday was a continuation of Milan’s struggles to score goals, as they’ve scored the lowest tally (57 goals) of the top 10 sides in Serie A. With their structured yet predictable play, they need something different in the final third to find a breakthrough, so it’s an ongoing concern for the Rossoneri.

7 — Tactically, Milan matched up well with Napoli and for the most part they nullified their threat. Gennaro Gattuso deserves praise for that, but he must find a way to make his side more of a threat offensively and to be more clinical with their opportunities.

Player ratings (1-10, 10=best; players introduced after 70 minutes get no rating)

GK Gianluigi Donnarumma, 8 — Made his 100th Serie A appearance for the club and produced a mature performance as he dealt with any danger with minimal fuss. Saved his best work for the final minute, pulling off an incredible save to deny Arkadiusz Milik from close range.

DF Davide Calabria, 7 — A solid display from the right-back as he defended well up against Lorenzo Insigne, while pushing forward with overlapping runs when possible. Needed to be more accurate with his delivery into the box, but a good showing.

DF Mateo Musacchio, 7 — Hasn’t played as much as he would have liked this season after the switch to a back four. However, showed his class on Sunday with a defensively sound performance while displaying great composure on the ball to build attacks.

DF Cristian Zapata, 7 — There is nervousness around Zapata for most supporters, as he does tend to have a mistake in him. To his credit, he defended well against a dangerous Napoli side and played a key role in keeping an impressive clean sheet.

DF Ricardo Rodriguez, 7 — The Swiss international is still too hesitant in possession as he often looks for an easy way out. However, he kept Jose Callejon quiet, which is no easy feat, and attacked well at times too.

MF Franck Kessie, 6 — His physicality and mobility was crucial in denying Napoli the chance to dictate the game and win the midfield battle with ease. However, while he will always put in a solid defensive shift, his composure and decision-making going forward still needs to improve.

MF Lucas Biglia, 7 — It was a perfect performance from a defensive perspective, as he constantly broke up play and swept things up in front of the defence. The difference is that while Jorginho does a similar job for Napoli, on the ball, he is everywhere too. Biglia seems to struggle to get beyond the halfway line and in turn, that is an element in why Milan struggle for goals.

MF Giacomo Bonaventura, 6 — Milan’s constant need to go wide to create chances paints a negative picture of their ability to threaten through the middle. It was a good display compared to his recent struggles, but Bonaventura has to be more influential in the attacking phase either on the ball or with his runs into the box.

FW Suso, 5 — There is so much responsibility on his shoulders to make things happen, but the Spaniard failed to deliver in a big game again. It questions whether he has the ability to be the creative leader in this Milan side, as he was too quiet or too ineffective throughout the game.

FW Nikola Kalinic, 5 — The under-fire forward deserves credit for his effort, as he worked hard off the ball and made decent runs which troubled the Napoli backline. However, not alert enough to pounce on chances and didn’t do much else to make himself a threat.

FW Hakan Calhanoglu, 7 — From his crossfield passes to his intricate one-twos and ability to pick up the tempo, Calhanoglu was again the most impressive creative player on the pitch. Needs to be more decisive, but looks like the only player capable of making something happen.

FW Andre Silva, 6 — Showed a better touch than Kalinic, plus an ability to hold up the ball and bring others into play. Didn’t threaten to score a goal but must be wondering why he isn’t ahead of his teammate in the pecking order.

MF Manuel Locatelli, N/R — Brought on for the last 10 minutes and wasn’t able to have a significant impact.