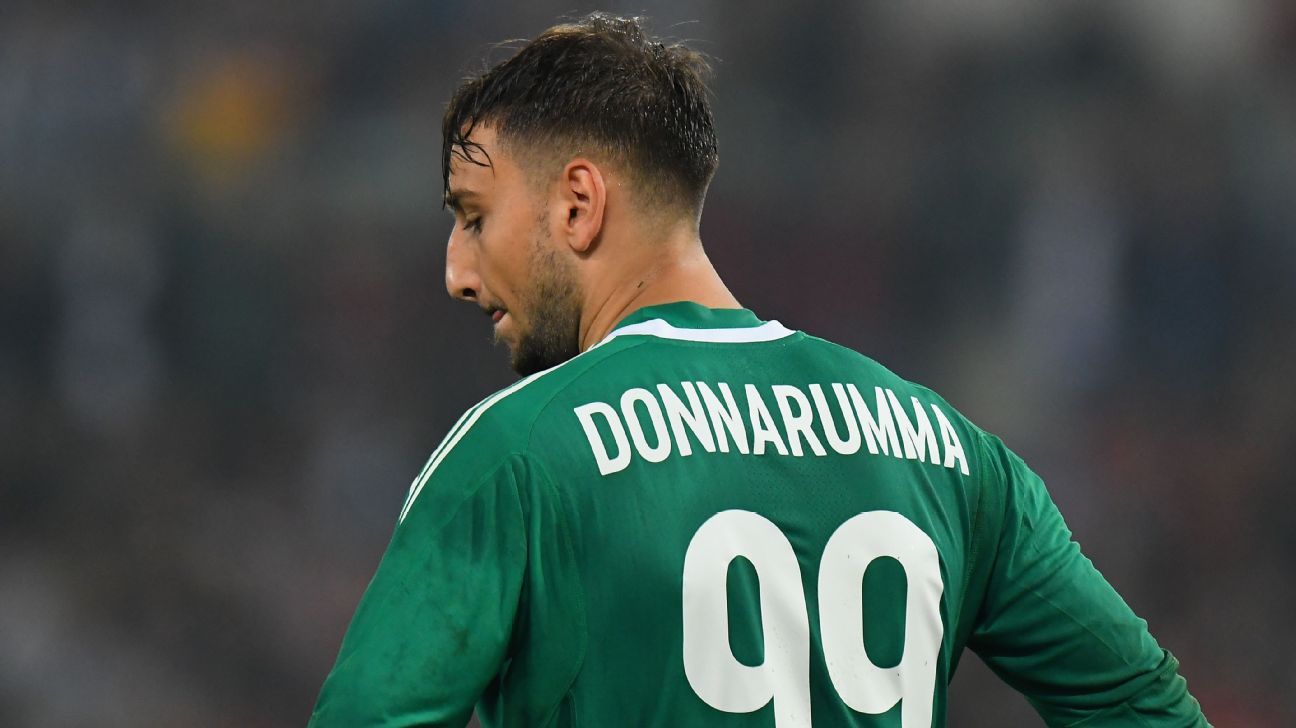 
Gianluigi Donnarumma looked like he was trying to hold back the tears. Milan captain Leonardo Bonucci and back-up goalkeeper Marco Storari immediately sought him out at the full-time whistle; clearly the two of them felt their teammate needed some consoling. Wednesday’s Coppa Italia final will probably go down as the worst night of Donnarumma’s young career. Not only did Milan lose 4-0, a result Rino Gattuso considered “a lie,” but in four second-half minutes Donnarumma made two costly mistakes and left his team needing a miracle.

It must have hurt. Donnarumma is more than Milan’s goalkeeper. He’s a Milan fan. Who can forget him kissing the badge in defiance after a stoppage-time defeat at the Allianz Stadium last season?

The pain will not have been eased by the awareness of how important this match was for his team, either. It was a chance for this young team, of which Donnarumma is the leading light, to lift a trophy Milan haven’t won in 15 years. Owner Li Yonghong even put in a rare appearance, presumably in the hope that he’d see Milan bring home the first piece of silverware of a new era.

Beating Juventus would also have wrapped up qualification for next year’s Europa League and saved some face, although you have to say Milan’s objectives were loftier after committing to invest €220 million in the team last summer. Instead, Donnarumma and the team must immediately pick up the pieces and put themselves back together again. Sixth in Serie A, Milan’s destiny is in their hands. But the fixtures awaiting them — away to Atalanta and at home to Fiorentina — are, in essence, Europa League play-offs. Tough games against teams with a hunger and freshness about them, the cause of no small alarm for Milanisti.

All of this presumably ran through Donnarumma’s head late on Wednesday night. A lot of responsibility has been placed on this young man’s shoulders. Gigi Buffon gave him a friendly slap before the medal ceremony as if to say “Chin up, kid,” while Juve boss Massimiliano Allegri sought to re-balance the debate going on after the game. The Juventus coach could sense that a lot of the post-match discussion would focus on the errors Donnarumma made, which is why he thought it only fair to highlight the two “sensational saves” the Italy international made to deny Paulo Dybala at the start of the second half.

We can pore over the glitches in Donnarumma’s performance, sure. We’ve seen him spill shots like Douglas Costa’s before: Take Granit Xhaka’s goal at the Emirates, for instance. We can go into other occasions where he could have done better. Maybe he has a blind spot low to his left. (Niccolo Barella’s strike in January springs to mind.) Room for improvement is there to be made in 1-on-1 situations too, but let’s have some perspective.

“I’ve never seen a goalkeeper who doesn’t make mistakes. They don’t exist,” said Giacomo Bonaventura,  rushing to his Milan teammate’s defence. “He made a mistake. We all make mistakes.”

Naturally, Gattuso was also protective of the teenager too. “We’re not here to point the finger at Gigio,” he insisted. “We’ve all got to take responsibility. We haven’t lost because of Gigio.”

What must not be overlooked here is Donnarumma’s age. He only turned 19 in mid-February and yet made his 100th appearance in Serie A this April. The likes of Silvio Piola, Roberto Mancini, Paolo Maldini, Francesco Totti and Buffon were all older by the time they reached that landmark. Donnarumma marked it by making one of the saves of the season to deny Napoli striker Arkadiusz Milik a stoppage-time winner, seriously denting his hometown club’s title hopes.

La Gazzetta dello Sport’s headline on Thursday morning — “From Doha to Roma” — was a polite way of saying “From Hero to Zero.” But it reminded the pink paper’s readers of that famous night in Qatar when Donnarumma single-handedly won Milan the Super Cup by stopping Dybala in a penalty shootout. It elevated his status, bringing more attention and greater expectations.

The hopes of a nation are being projected on him with Buffon nearing retirement, but the hype is beginning to meet with increasing skepticism. And that’s despite advanced metrics showing that Donnarumma is performing above the league average and more or less in line with Buffon, Pepe Reina and Samir Handanovic; they’re the best shot-stoppers in the league over the past three years, even if Alisson deserves the Golden Gloves this season and Mattia Perin arguably merits consideration as the most impressive Italian.

Expectations are high as far as Donnarumma is concerned. Part of it is past performance. Part of it is the kid’s huge potential. The rest is a film called “I Know What You Did Last Summer” and the upcoming sequel.

Milan paid a fortune to keep Donnarumma a year ago. Only Gonzalo Higuain, Dybala and Bonucci earn more than him in Serie A. The fact Milan re-signed his big brother Antonio, and agreed to send €1m a year his way, intensified the scrutiny.

The deal brought Donnarumma more money and what he really wanted, which was to stay at Milan even against his agent’s better judgment. But it also came at the expense of patience, goodwill and the player’s serenity. While club and agent went to war over his future, he suffered.

Donnarumma had a poor Under-21 European Championship, conceding goals on six of opponents’ 10 shots on target. He was showered in dollar bills in the famous Dollarumma protest and it didn’t end with him signing on the dotted line. When it emerged over the winter that the contract was still a major bone of contention, the ultras unfurled a banner before a cup game against Hellas calling his brother a “parasite” and expressing their wish for Gigio to leave. Dressing room footage showed Donnarumma in tears.

Peace was struck after the Europa League game away to Ludogorets but it’s hard to escape the idea that Donnarumma’s greatest attributes, his composure and unflappability, have been seriously challenged this season. A season in which Milan were supposed to be back and returning to the Champions League as the absolute minimum, only for Vincenzo Montella to fall into confusion and chop and change the system to accommodate new signings. Gattuso soon replaced him and stabilised the situation, but only after a long process of getting the players fit. All this with financial uncertainty as the backdrop.

It hasn’t been easy for anyone to look good in these circumstances, without even getting into the inconsistency of Bonucci’s first few months.

Nor can it be easy for a Milan fan, like Donnarumma, to know a deal for Reina is practically done and these final two games may be his last in the shirt he grew up dreaming of wearing. With no Champions League football, no refinancing in sight and offers on Mino Raiola’s table, the pressure will be on for Milan to sell even if cashing in on players like Andre Silva and Mateo Musacchio would be a more preferable way of raising money than sacrificing the talent earmarked to be the future of the club.

It was difficult to watch Donnarumma in such despair on Wednesday night. In the long run, the hope is he’ll come through it and be stronger for it.