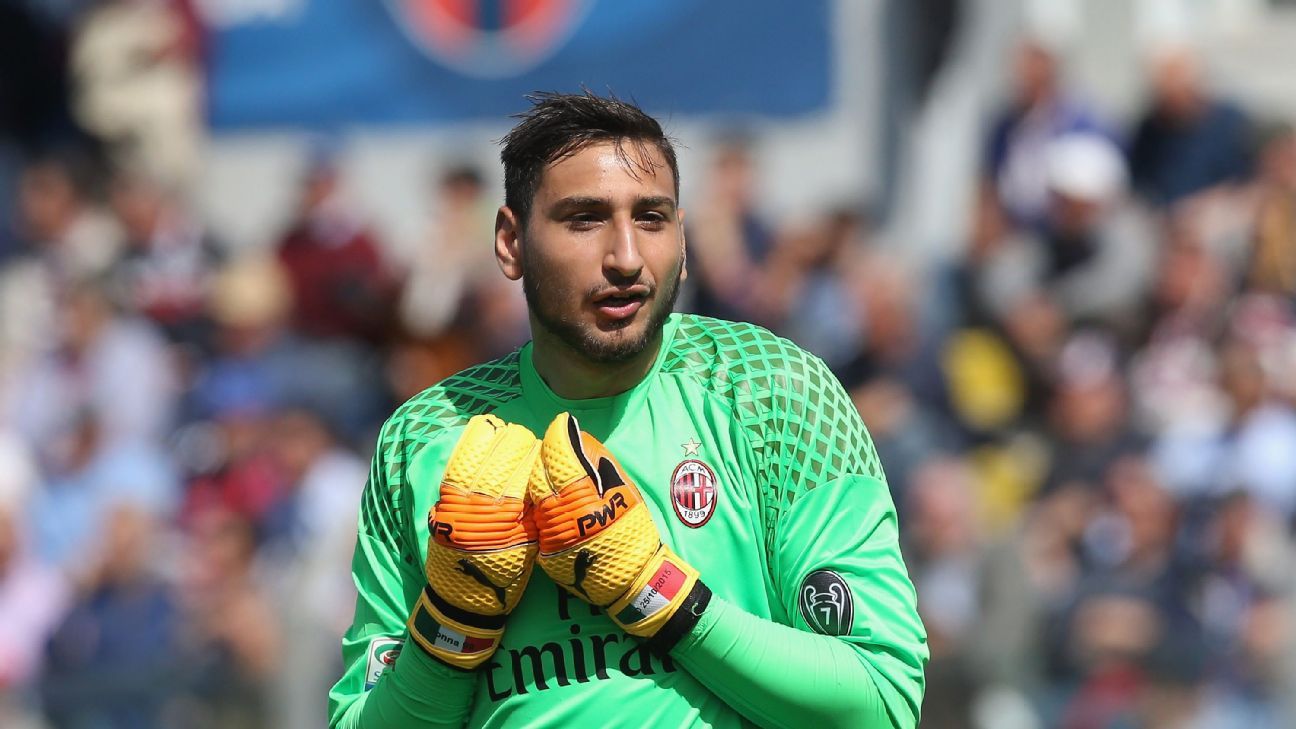 
It was billed as D-Day. Decision time for AC Milan’s goalkeeping wunderkind Gianluigi Donnarumma. Two weeks ago, the club’s new director of sport, Massimiliano Mirabelli, met the player’s agent, Mino Raiola, in Monte Carlo and laid his cards on the table. Donnarumma’s first contract as a professional would make him the highest-paid player at the club. The offer was €4 million a year until 2022, rising to €5m with performance related add-ons: a huge figure for a kid who only turned 18 in February, passed the theory test for his driving licence in March and finished his school exams a fortnight ago; just in time to fly off to the Under-21 European Championships in Poland.

Raiola didn’t blink. Irrespective of the €99m Milan have committed in transfer fees already this summer, he remains sceptical of the new owner. To protect his client, a request was made for a buy-out clause to be included in the contract that would allow Donnarumma an escape route if Milan failed to qualify for the Champions League. Milan refused to budge unless it was for a prohibitively high figure — nothing less than €100m. Wishing to see progress on the matter, Milan wanted an answer by Tuesday. None was forthcoming and their frustration reportedly led them to pick up the phone and speak to Donnarumma directly. This apparently infuriated Raiola. A meeting was scheduled for Thursday at Milan’s headquarters Casa Milan. The scene was set for a showdown.

Raiola and his cousin Enzo, who handles Donnarumma, arrived at 4:30 p.m. and didn’t stick around for long. The meeting lasted 20 to 25 minutes and then the truly stunning happened: A press conference was announced as imminent. Sky Italia didn’t even have time to get their camera equipment set up before it began. What could it be about?

Notwithstanding the tensions between Milan and Raiola, the general feeling was Donnarumma would commit his future to the club. After all, he’s a huge Milan fan. Kaka posters still adorn his bedroom wall at the family home in Castellammare di Stabia. He chose AC Milan even though Inter Milan were the first club to make him an offer and famously kissed the badge when Milan beat Juventus in the Super Cup before Christmas.

Donnarumma would do so again when they lost at the Juventus Stadium in March, decrying a late and controversial Juventus penalty. “Sempre loro” he complained. It’s always them. By provocatively raising the crest to his lips, Donnarumma was saying he could never identify with them. He was a proud Milanista. Then, just days after Milan qualified for Europe, returning to continental competition for the first time in three years, Donnarumma gave the clearest signal yet that he was staying in an interview with GQ Italia. “I am very attached to Milan,” he said. “And I’m laid-back about it because all parties involved know my desire.”

Paolo Condo, the journalist who conducted the interview, left absolutely convinced that Donnarumma would sign a new deal. What persuaded him even further was Donnarumma’s revelation that he plans to finally leave the convent where Milan’s youth team players dorm near San Siro. “It’s true confess. I feel ready and I can’t wait, even if I sometimes I argue with my parents about it as they still struggle in thinking of me as mature enough. I’m looking for a big flat where there is enough space for my closest friends and family, and seeing as the centre of Milan is so beautiful, I’m looking for it there.”

Days before going to print, GQ got in touch with Donnarumma’s entourage about making the interview the cover story and received further reassurance that the player’s intention was to be Milan’s goalkeeper for years to come. You can forgive Milan then for feeling strengthened by that knowledge and it perhaps explains how seemingly aggressive they were in their dealings with Raiola.

Milan let it be known that they wouldn’t be pushed around — not even by one of the world’s most powerful agents. That’s why they instantly called a press conference on Thursday and revealed to everyone’s consternation that Donnarumma is not extending his contract and that his decision is “definitive.”

Rather than issue a statement, or shy away and not say anything at all, Milan got out in front of the story and put on a show of strength at a time when many might have expected them to look weak. “Mirabelli and I hoped to be able to build the new Milan around Donnarumma,” chief executive Marco Fassone explained. “This decision saddens us but Milan moves on.” Make no mistake it’s a big blow and it certainly dampens the enthusiasm the new administration has created over the last few weeks. The prevailing sense is that whoever Milan sign between now and the end of the window, nothing would top Donnarumma committing his future to the club and becoming a talismanic figure a la Paolo Maldini or Franco Baresi. But a couple of things have helped them absorb the shock.

First of all, the moves Milan have made already have given the project a credibility that it previously lacked. They have won people’s confidence. Second, they have left the impression of doing everything in their power to make Donnarumma happy. The offer Milan made wasn’t insulting. Far from it and right now, fans are instead disappointed in Donnarumma, rather than the club. Inevitably Raiola has also been accused of acting in his own self-interest instead of his client’s.

So what next? In the short-term at least the Under-21 Euros are upon us and it’ll be fascinating to see if the unflappable Donnarumma is destabilised by the speculation surrounding his future. A few weeks ago, Il Corriere dello Sport claimed Milan had told Donnarumma to renew his contract or spend next season in the stands as the team’s third-choice goalkeeper. Imagine the scenario though if this happens and the team loses a few games or his replacement makes a series mistakes? The pressure on Vincenzo Montella to end the stand-off would be huge.

Also, if Donnarumma’s mind is made up and there’s no talking him round, it makes sense to cash in now and use the money to good effect, not only reinvesting it in another ‘keeper, but a star player who can replace Donnarumma in the hearts of Milan fans, like Andrea Belotti who, in addition to being a top striker, also just so happens to be a big Milan supporter.

And what about the other interested parties in this affair. Of course, while letting Donnarumma’s contract wind down might well suit Raiola because of the Zlatan Ibrahimovic-style signing-on fee both player and agent could command, it wouldn’t exactly seem right by his client. Next year is a World Cup year and Donnarumma wants to compete with Gigi Buffon for the No.1 shirt. He needs to play. And is leaving Milan at this stage of his career really what’s best for him?

Another twist in this tale should not be discounted. If Donnarumma listens to his heart, there could well be a change of heart. If not, the only satisfactory outcome for all parties is a sale this summer. Milan fans don’t wish to see him joining Juventus on a free transfer this time next year. Donnarumma’s past actions would appear to make it impossible, but it can’t be ruled out. Juventus will try. Other suitors include PSG who made an inquiry this week but the smart money is on European champions Real Madrid amid talk of a €6m a year salary.

After Ederson and Jordan Pickford’s moves, business in the transfer market this summer looks set to be defined by goalkeepers.