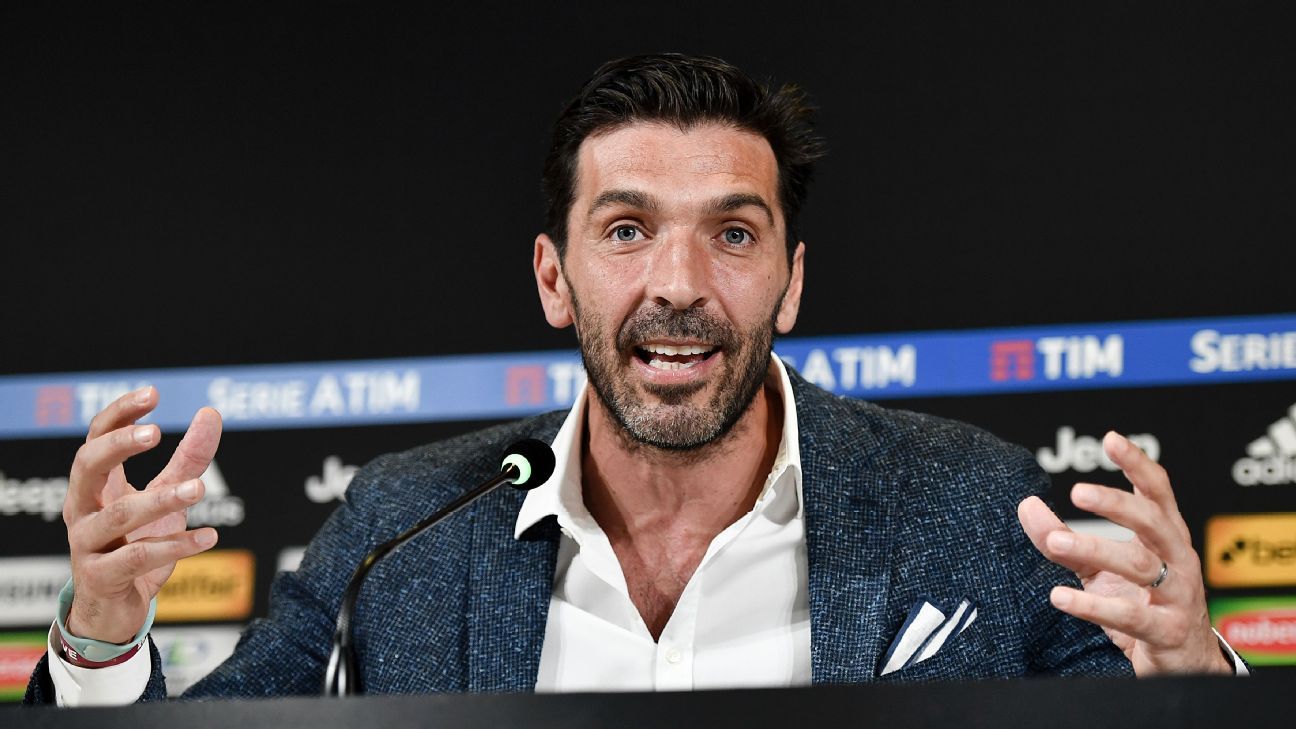 
“It’s hard to find the words,” Andrea Agnelli admitted. But the Juventus president did his best to describe the man sitting next to him, Gianluigi Buffon.

It was clear to everyone in attendance at Thursday’s press conference that the bond between the two goes beyond football. Buffon is godfather to Agnelli’s daughter and, outside of the president’s family, “no one has been a more frequent visitor to my home.”

A 17-year career in black and white is drawing to a close. Saturday’s game against Hellas Verona at the Allianz Stadium will be Buffon’s last defending Juventus’ goal. Wojciech Szczesny will succeed him as the Old Lady’s No.1 and Giorgio Chiellini will take the captain’s armband.

When Buffon mentioned that the Agnelli family had been involved with Juventus for almost a century, his boss and friend succeeded in finding a way of putting the goalkeeper’s own place in history in perspective.

Seventeen years is nearly “20 percent of that time,” Agnelli said. “Thirty percent of the trophies in our museum carry your name.”

Buffon hadn’t thought about it like that. He smiled, with whatever sadness the 40-year-old felt when the press conference began — his voice initially trembled when his turn came to speak — having subsided. You could tell Buffon was proud.

First, there was his own journey, which Agnelli made out to be something Dante might have written: “He was in heaven, then in hell [after Calciopoli, relegation and Serie B] but made it back to heaven again.”

Then there was this season, Buffon’s last, which brought a seventh successive Scudetto and a fourth consecutive league and cup double. The players who have been there for all of them — Buffon, Chiellini, Andrea Barzagli, Stephane Lichtsteiner and Claudio Marchisio — insist it was the “hardest.”

“It was a season with sensational and unexpected lows [like Italy failing to qualify for the World Cup and Juventus’ stoppage time elimination from the Champions League] and incredible highs,” Buffon said.

For Juventus to hold their nerve and win the title after losing to Napoli in Turin at the end of last month provoked immense satisfaction in Buffon, particularly when they looked like throwing it away against Inter the following week.

What also came across was how much it mattered to Buffon to go out not only as a winner but as a “competitive animal.” He never wanted to be a burden to Juventus. At 40, he believes he has what it takes to play on at the highest level, which is why he isn’t retiring. At least not for now.

Buffon was sure about calling it a day until about two weeks ago, but something changed. Offers to keep playing are not in short supply; the Italian papers are full of reported interest from Boca Juniors, Sporting Lisbon, Liverpool and Borussia Monchengladbach, Buffon’s “German team.”

Disappointingly, for those of a romantic persuasion, Buffon downplayed a return to Parma as the stuff of kids’ dreams. Still, you can imagine the ears of his former club pricking up and Parma could maybe do with their former No. 1 as they prepare to make a final push for promotion to Serie A.

Agnelli sees Buffon’s long-term future at Juventus, adding that he can spend a year “learning and studying to get a 360-degree understanding of the club. After that, we’d see what the best role would be. That’s as true for Gigi as it is for any employee.” It brought to mind the career path of Giampiero Boniperti who, having played more than 450 times for the club, went on to serve as its president.

All we know for now is Buffon will make his decision next week and it’s up to him to decide where his passion lies. While he won’t be playing for Italy again, the FIGC are expected to sound him out for a role with the national team. In the meantime, he has expressed his desire for the next few days to be as normal as possible. He does not want a fuss. His agent, the former goalkeeper Silvano Martina, insists Saturday afternoon will be a “more sober” affair than Francesco Totti’s goodbye game for Roma a year ago. His client would not have it any other way: “Even as a kid I found birthdays a hassle because I didn’t like being the centre of attention,” Buffon said.

But every camera will be trained on him at the weekend and this occasion is guaranteed to be emotional. The game will be a distraction, a secondary consideration in what promises to be the biggest strappalacrime — or tearjerker — at the Allianz Stadium since Alessandro Del Piero left in 2012.

Buffon has known what he wanted to do ever since, as a 12-year-old, he saw Cameroon’s Thomas N’Kono punching one Argentine attack away after the other in the opening game of Italia `90. Listening to him on Thursday brought to mind an anecdote from his early days.

Parma’s goalkeeping coach Ermes Fulgoni told Buffon, then 16, that he would be a starter in Serie A within four years. Fulgoni thought the boy would be pleased with such a show of confidence in his ability. “What am I going to do until then?” Buffon replied.

Flash forward to 2018 and the 40-year-old is asking the same question. While he figures that out, all that is left to say is: “Grazie Gigi.”

Mourinho, Tottenham show they’re in title race; Barcelona in free fall; Zlatan the hero for Milan
Chelsea’s Abraham, Mount, James all 8/10 in easy win over Newcastle
Man City reserve goalkeeper Scott Carson relishing role as mentor to Zack Steffen but still hopes to play
Fed up Messi ‘tired’ of being blamed for all of Barcelona’s problems
England job starting to wear on Southgate. Is he thinking about a fresh start after 2022 World Cup?