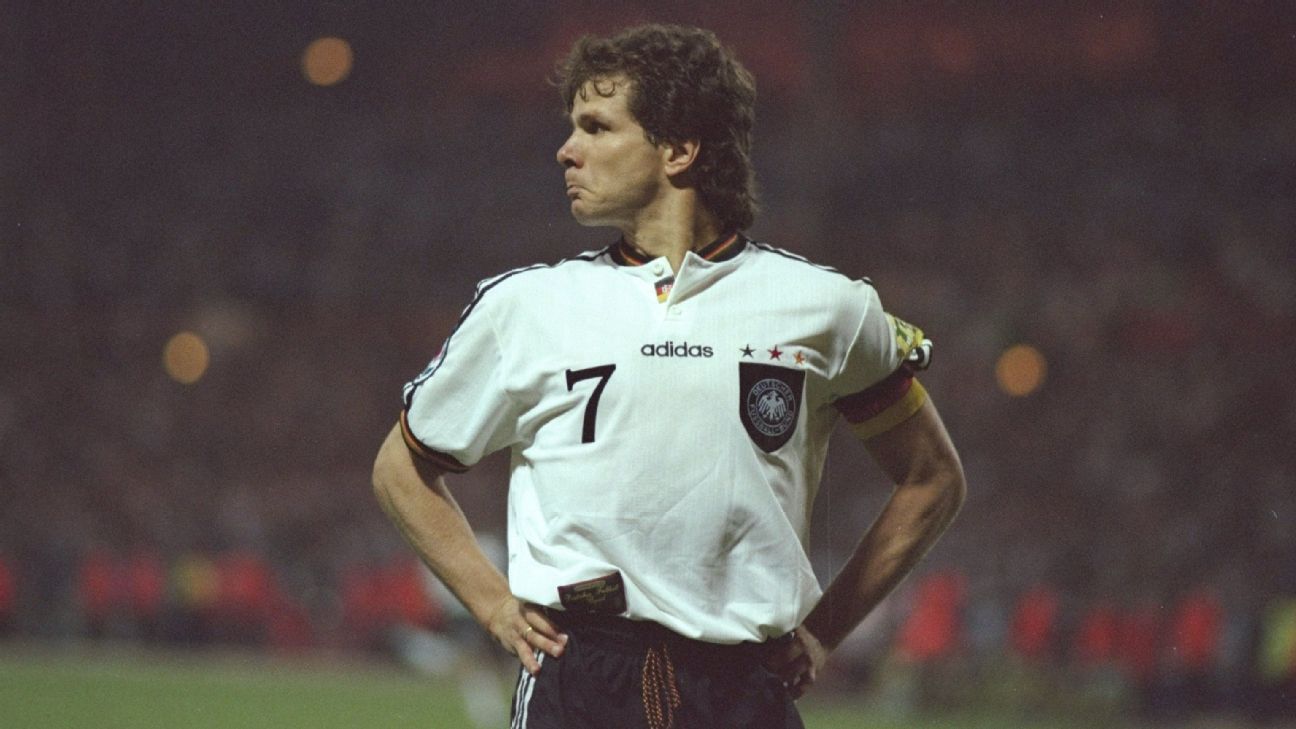 
In 1996, football was coming home, and England were set to end 30 years of hurt. After a dramatic 120 minutes at Wembley, Germany and Euro ’96 hosts England were locked at 1-1 in their semifinal, and six years on from Italia ’90, penalties would once again be used to separate the two nations.

At 5-5 in the shootout, Gareth Southgate stepped toward the spot and had his shot saved. Back on the halfway line, Germany captain Andreas Moller was preparing for his attempt. The Borussia Dortmund midfielder had been booked earlier on in the match and was already suspended for the final.

He slowly walked to the box to thunderous whistles from the England supporters. It was one of those moments to which football boils down. Man against man. Moller against David Seaman and the Wembley crowd.

The German No. 7 sent the ball flying into the top middle of the goal, leaving Seaman and the rest of England on the ground. Football was not coming home, it just continued to be — as Gary Lineker once said — a simple game of 22 men chasing a ball, and at the end, the Germans always win.

Moller, free from the pressure, ran past the goal and for seconds posed in front of the fans. Hands on hips, head slightly shifted to the left. This moment, with the athletic Moller emulating Paul Gascoigne’s muscleman celebration earlier in the shootout, became one of the iconic pictures of Euro ’96 and of the German’s career.

“It was intuition,” Moller, who turns 50 on Saturday, told ESPN FC of his celebration. “I wanted to signal, ‘Hey, look at us, we’ve beaten England in the semis in their stadium.’ It was such an intense and difficult match. It signalled proudness. It was never planned.”

People accused Moller of arrogance, and a generation of Englishmen were enraged. But “Gazza” did not feel offended.

“I met him out shopping a few days later,” Moller said. “And it was great meeting him. He was a nice guy. He congratulated me. He wasn’t angry at all but instead took the blame because they had so many chances in the first 30 minutes to win it. He said they could have decided the match in the first half. Gazza was different to how he was on the pitch. He was a bit crazy on the field.”

Moller never was crazy on the field. He simply was one of the greatest midfielders of his generation, winning trophy after trophy. The midfielder won the 1990 World Cup, the 1996 European Championship, the 1997 Champions League and the 1993 UEFA Cup.

Add to that vital contributions to two Bundesliga titles (while just falling short of a further two), three German cups and 87 caps for Germany, and you get a sense of just how good a player he was.

With the memory of his playing career slowly fading over the 13 years since his final Bundesliga match for Eintracht Frankfurt, these days his name in Germany is still firmly attached to a dive he took in 1995. That year, he became the first player to be banned for diving when video evidence showed that no Karlsruhe defender had been near him when he went down in the box to earn a match-winning — if not title-deciding — penalty for Borussia Dortmund.

“I want to end this,” Moller said. “I had an 18-year-long career, won so many trophies. A tiny part of it was that dive. I made so many great games, but this, it’s no longer in memory.”

Yet out on the field, Moller was so much more. He was about pace, technique and getting into position. He was a classic No. 10, scoring goals, setting them up, dribbling past his opponents and finding the space behind the defensive line.

Coming through the ranks at Eintracht Frankfurt, Moller joined Borussia Dortmund for 2.5 million Deutsche Marks (€1.25 million) in January 1988. Just more than a season later, he was a key player in the summer of 1989 as BVB won their first trophy since the 1966 European Cup Winners’ Cup with a 4-1 win over favourites Werder Bremen.

In 1990, Moller was the youngest member of the Germany squad that won the 1990 World Cup. Two seasons on, Eintracht Frankfurt came close to their first Bundesliga title with the midfielder, who had returned home. A year on, in 1993, he won the UEFA Cup with Juventus before re-signing for Dortmund a year later.

“My best moments at club level were the 1989 cup win alongside the 1995 Bundesliga title,” Moller says, having secured the title-winning 2-0 win over Hamburg with a free kick curled around the wall early in the match.

“Those titles shaped me. They are still deep in my memories. After the final whistle, the floodgates at the Westfalenstadion were opened. And the fans wanted everything I had on me. There was no escape. And somebody decided we’ll get you into the dressing room in our hands, and they lifted me up and carried me into the dressing room. It was wonderful. You can only wish for this as a footballer. It’s unique.”

The midfielder won another Bundesliga title and the Champions League with Dortmund, but when in 2000 he felt he was no longer wanted at the Westfalenstadion, he moved to BVB’s fiercest rivals.

“I was actually thinking about going abroad, but Schalke entered the frame and said: ‘You are our man.’ It was a great chance to put things straight and show I can be a leader,” Moller said.

He returned to the Westfalenstadion only a couple of months later to crush BVB 4-0 in his first away derby with Schalke.

“It was massive,” he said of the hostile reception he received that day. “I played for Dortmund for so long [and] the rivalry is so big, the fans couldn’t understand. But I was thinking about my situation.”

Moller never took the easy road, and once he had finished at Frankfurt in 2004, he all but disappeared from the big stage. In 2015, he resurfaced as Hungary’s assistant coach, appointed by his old BVB teammate Bernd Storck.

“Football remains my passion,” Moller said on Friday, the eve of his 50th birthday.

True to form, he will spend his big day with the national team as they prepare for their World Cup qualifier against Cristiano Ronaldo’s Portugal.

Andreas Moller’s top XI of players he played with: