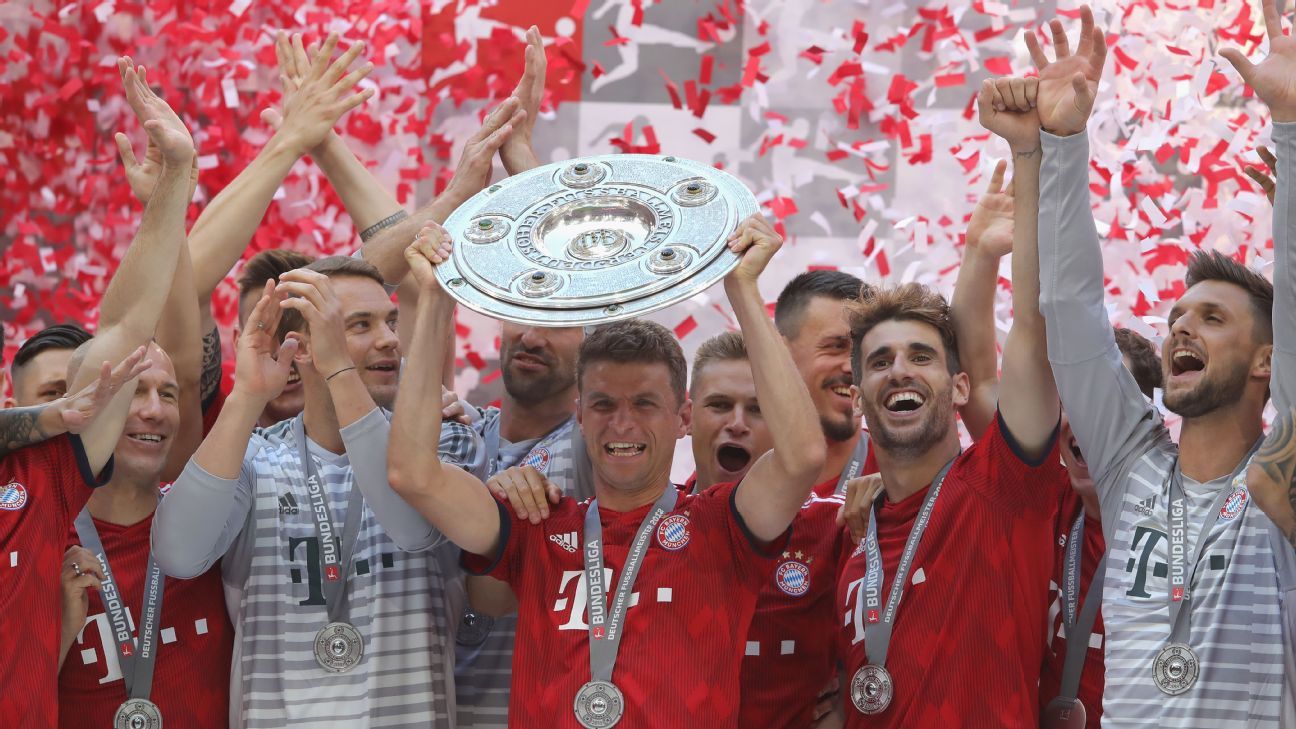 
At the very top, a Bundesliga season that started with FC Bayern Munich showing uncharacteristic weakness, and firing Carlo Ancelotti before Oktoberfest had even begun, ended much like the one before.

Following an inauspicious start, the Reds won the title — their sixth in a row — more or less uncontested but once again came away empty-handed in the Champions League and the DFB Pokal. The Meisterschaft (“championship”) parties inside the stadium and in the city centre felt forced, devoid of genuine joy, like an end-of-the-financial-year office get-together when there’s been zero growth and no employee bonuses. Not quite the fairy-tale ending Jupp Heynckes, the surprise choice for caretaker manager at the Allianz Arena, had hoped for.

When the trophy is yours to lose before a first ball has been kicked, slight relief becomes the overwhelming sensation. In Bayern’s case, anger and sadness over another narrow miss in Europe, where they got knocked out by Real Madrid after a very good performance at the Bernabeu, and embarrassment over their 3-1 defeat in the cup at the hands of Eintracht Frankfurt, plus incoming FB coach Niko Kovac seemed to weigh strongly on the players’ minds. Sunday’s celebrations felt more “like a wake,” according to local paper Abendzeitung.

President Uli Hoeness, who had hoped that 2016-17’s singular silverware haul would prove “an exception” this time around, insisted that the past campaign had been “outstanding.” However, he was not prepared to see the season being bad-mouthed “after missing out on the Champions League final by a few centimetres and getting into the DFB Pokal final,” the 66-year-old said.

Hoeness, Executive Chairman of the Board Karl-Heinz Rummenigge and the players all agreed that Bayern lacked “a bit of passion and willpower” after their Champions League exit. “It’s as if someone has pulled out the plug,”  midfielder Thomas Muller said in Berlin. In other words, the team’s failure was psychological in nature rather than a problem with squad quality.

Tellingly, Hoeness predicted that there won’t be any high-profile signings beyond new recruits Serge Gnabry (end of loan, Hoffenheim) and Leon Goretzka (Schalke) unless Bayern were to make significant money from one or two departing players. Warming to that narrative of Bavarian self-sufficiency, the president expressed the hope that Kovac would be able to coax “one or two players to perform at the highest level in the important games — not against the weak opponents.”

Having a few more important games domestically, against fewer weak opponents, might well help Bayern in their quest for international glory, but there’s only so much they can do about their rivals’ ineptitude.

While Borussia Dortmund just about hit their own target of qualifying for the Champions League, a tally of 55 points and fourth place spoke of a dramatic loss of form. The Black and Yellows appointed the wrong coach in the gung-ho Peter Bosz, only to change course and head too far in the other direction courtesy of defensive-minded replacement Peter Stoger, a stodgy, uninspiring choice who tried to hide his discomfort in the role by wearing as many club merchandising garments as possible. It was all a bit of a masquerade, really.

For the fourth time in as many years, the Black and Yellows will have to press the restart button. Since Jurgen Klopp’s departure in 2015, they’ve gone into campaigns with either a new coach (Thomas Tuchel in 2015, Bosz in 2017) or a radically new team (2016). Next year, they’ll have both. There won’t be many better managers than Lucien Favre plying their trade in the Bundesliga come August, but the Swiss maestro has to rely on the club keeping their remaining star players for once following the acrimonious sales of Pierre-Emerick Aubameyang (Arsenal, in January) and Ousmane Dembele (Barcelona, last August).

Dortmund’s neighbours Schalke, meanwhile, feel as if they have finally gotten their managerial appointment right. In his first season with the Royal Blues, 32-year-old Domenico Tedesco rarely produced breathtaking fare, but his side were tactically flexible, tough to beat and hugely competent. Finishing second was a well-deserved reward for their efficiency and holds promise of further improvement courtesy of some well-appointed new signings.

TSG Hoffenheim’s achievements were even more impressive. Julian Nagelsmann’s team had to contend with the loss of three key players in Niklas Sule, Sebastian Rudy and Sandro Wagner (all to Bayern) before the second half of the season but nevertheless powered to a historic third-place finish. It’ll be fascinating to see Nagelsmann, 30, apply the lessons of a botched Europa League campaign to his first outing in the Champions League next season.

Talking of the Europa League, there’s ample reason to believe that Bayer 04 Leverkusen, RB Leipzig and Eintracht Frankfurt will represent Germany’s interest better than SC Freiburg, Hertha and 1. FC Koln did last season. The latter never recovered from getting carried away by their first European outing in 25 years to finish the season in bottom place with a measly 22 points. VfL Wolfsburg survived via a detour against Holstein Kiel in the relegation play-off, but former northern powerhouse Hamburger SV, a club that miraculously escaped impending disaster more often than Gomorrah’s Ciro “Immortal” Di Marzio in recent years, finally bit the bullet.

After nearly 55 years in the Bundesliga, the famous clock inside Hamburg’s stadium has been reset to show the time since the club’s formation in September 1887. Let’s hope that it won’t take them another 130 years to get back to the top flight.

In an underwhelming year for individual performances, Robert Lewandowski was peerless in the box, scoring 29 goals to win his third Torjager (“top scorer”) cannon. Colombian teammate James Rodriguez was less visibly productive but arguably the league’s most impressive performer overall, bringing unsurpassed elegance and incisiveness into Bayern’s midfield under Heynckes.

Cordoba, a €17 million replacement for 1. FC Koln’s main hit man Anthony Modeste, was always going to have a tough time emulating the one-man goal-machine (25 strikes last season) from Cannes. But the Billy Goats would have expected him to be at least occasionally on target. As it was, Cordoba didn’t find the net once. No wonder Koln went down.

Trust Hamburger SV to sell one of their most promising players for a mere pittance. Augsburg couldn’t believe their luck when they secured the services of Austrian striker Michael Gregoritsch for €5.5m. The industrious and clever forward provided 13 goals and five assists that went a long way to ensuring the crafty Bavarians, tipped by many so-called experts for relegation, spent a season in mid-table comfort once more.

Petersen, the 29-year-old forward from SC Freiburg, has always been a pretty dependable scorer, averaging just over nine goals per season in the top flight for his current team and former club Werder Bremen. But his astounding tally of 15 goals (and three assists) this year not only made the difference between Freiburg going down and staying, but it also made him the most unlikely name in Joachim Low’s preliminary World Cup squad.

Must do better: Julian Weigl

Borussia Dortmund’s hugely talented playmaker started the season late due to injury and never really got going. The 22-year-old was miles off the pace compared with his performances in previous seasons and duly missed out on going to the World Cup. In his defence, Bosz’s confused, high-risk tactics made it nigh impossible for him to dominate games with calm possession. By the time Stoger took over in Christmas, the midfielder’s loss of perform had proved irreparable, but Weigl is far too good to shlep through another campaign mired in mediocrity. Favre’s eye for detail, as well as his preference for a slow possession game, should see Weigl bounce back next season.

If you like your goals of the long-range variety, Serge Gnabry’s 45-metre chip over Leipzig goalkeeper Peter Gulacsi (Hoffenheim 4-0 Leipzig in December) was pure delight, but in terms of skill and execution, Sebastian Haller (Eintracht Frankfurt) gets this correspondent’s vote. The Frenchman smashed a bicycle kick into net in the fourth minute of stopping time to take all three points vs. VfB Stuttgart (2-1) in September.

Dortmund and Schalke played out the “Revierderby of the century” (Bild) in Signal Iduna Park in November. The home side were up 4-0 after 25 minutes but saw their lead evaporate after half-time. Schalke defender Naldo headed in a 94th-minute equaliser that was celebrated like a victory by the delirious travelling supporters.

Favre working his magic to get Dortmund into title contention aside, the immediate return of a refreshed, well-run Hamburg after a year in 2. Bundesliga would be most welcome.

Prediction for next season

Muller joked that he and his Bayern teammates looked forward to seeing Heynckes “again in October.” Kovac should last a little longer, but the former Croatia manager will have his work cut out in trying to win over a doubtful dressing room and fan base. Every draw or defeat will bring speculation about his job security.

Favre’s Dortmund will provide a robust title challenge worthy of its name, while Leverkusen and Schalke continue to thrive. A German team will make it to the Europa League final. Hoffenheim will do well in the Champions League but lose focus domestically as job offers start pouring in for Nagelsmann.

Newly promoted 1. FC Nurnberg will go straight down again alongside Hannover 96. And following some highly controversial decisions in the World Cup, patience with VAR in its current guise will almost run out.