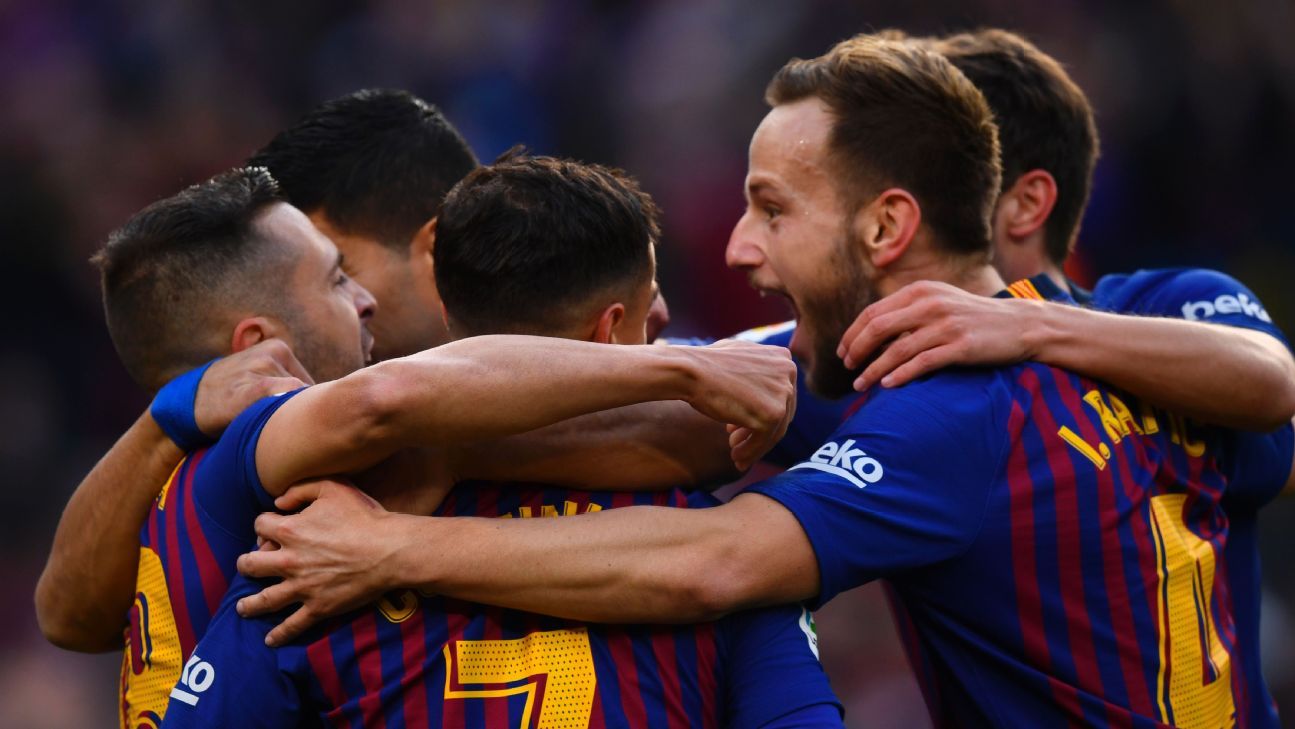 
BARCELONA, Spain — Gerard Pique says Barcelona are “better than ever” after a Luis Suarez hat trick helped them thump Real Madrid 5-1 and leave Julen Lopetegui on the brink of the sack.

Barca made light work of their Clasico rivals despite missing Lionel Messi, whose broken arm forced him to watch the game from the stands.

Philippe Coutinho and Arturo Vidal were also on target for the home side, with Madrid replying through Marcelo as they briefly threatened a comeback after the break.

“We scored five goals!” Pique told reporters. “These are moments to enjoy. It’s not easy to score five goals against your rival, so you have to enjoy it when it happens.

“I’m really happy. It’s an important result. The team’s better than ever and this week [wins against Sevilla, Inter Milan and Madrid] has given us a lot of confidence. We’ve been at a great level without even having our best player.”

Suarez said the club missed having Messi on the pitch but applauded the team’s effort.

“It’s better for Messi to play as he is the best in the world and he gives you a boost but we should be very proud as a team, as we showed that we are a great team without Messi and we have a great coach [Ernesto Valverde],” Suarez said.

Barca were winless in four league games before they beat Sevilla last weekend to return to the top of the table. During that poor run of form, Pique made a number of mistakes, including a big one in a loss to Leganes.

However, the defender has returned to form since the international break, stepping up in the absence of injured teammates Samuel Umtiti and Thomas Vermaelen.

“It was a question of time before I got back to my normal level,” he added. “The criticism is motivation for me to re-find my best form. I felt good, the sensations are good.”

Pique also called for Jordi Alba, exiled from international football since the World Cup, to be recalled to the Spain squad following an impressive run of form. The left-back scored against Inter and created Coutinho’s opener against Madrid.

“When you don’t have the best player on the pitch [Messi], everyone has to take a step forward,” Pique said. “The full-backs were really good. I hope [Spain manager] Luis Enrique rectifies his error and brings Jordi Alba back into the squad.”

Valverde admitted there was a spell in the second half, after Marcelo made it 2-1, when Madrid were on top, but overall was happy with Barcelona’s performance.

“There were 15 difficult minutes but it was a good performance,” the coach said in a news conference. “The first half was ours. They were reduced to long-range shots, but they didn’t get close. We did.

“In the second half, they changed their full-backs, making them wingers. We lost our way a bit and we didn’t do well for their goal. But we rebuilt and took advantage of the risks they were taking [looking for equaliser].

“Everyone has been asking how we would react without [Messi] since he got injured. The results could have been different, but we gave the answer we had to give, by playing as a team. But the sooner Messi’s back, the better.”

“Madrid went out to win the game in the second half and they had chances but we did a great job, we all ran a lot and they left space, and we took advantage on the counter-attack and killed the game off,” added Suarez, who rounded off a memorable week in which he also became a father for the third time.

“Nights like these are unforgettable. After a special week for becoming a father again these three goals taste even better,” he added.

Barca’s win moved them seven points clear of Madrid, who slip to ninth in the league table. It could spell the end for Lopetegui, who replaced Zinedine Zidane as coach in the summer.

“I know what it’s like to be in his position,” Valverde said. “It’s difficult. It seems as if everything’s going wrong and it affects the coach. That’s football, this is the spectacle we’re involved in.

“I could be in his position in three weeks. It’s how it is. For me, all sackings are unjust. I don’t like any manager getting fired, not Lopetegui, not the Huesca coach, not the Granada coach… not the Barcelona coach, of course.”