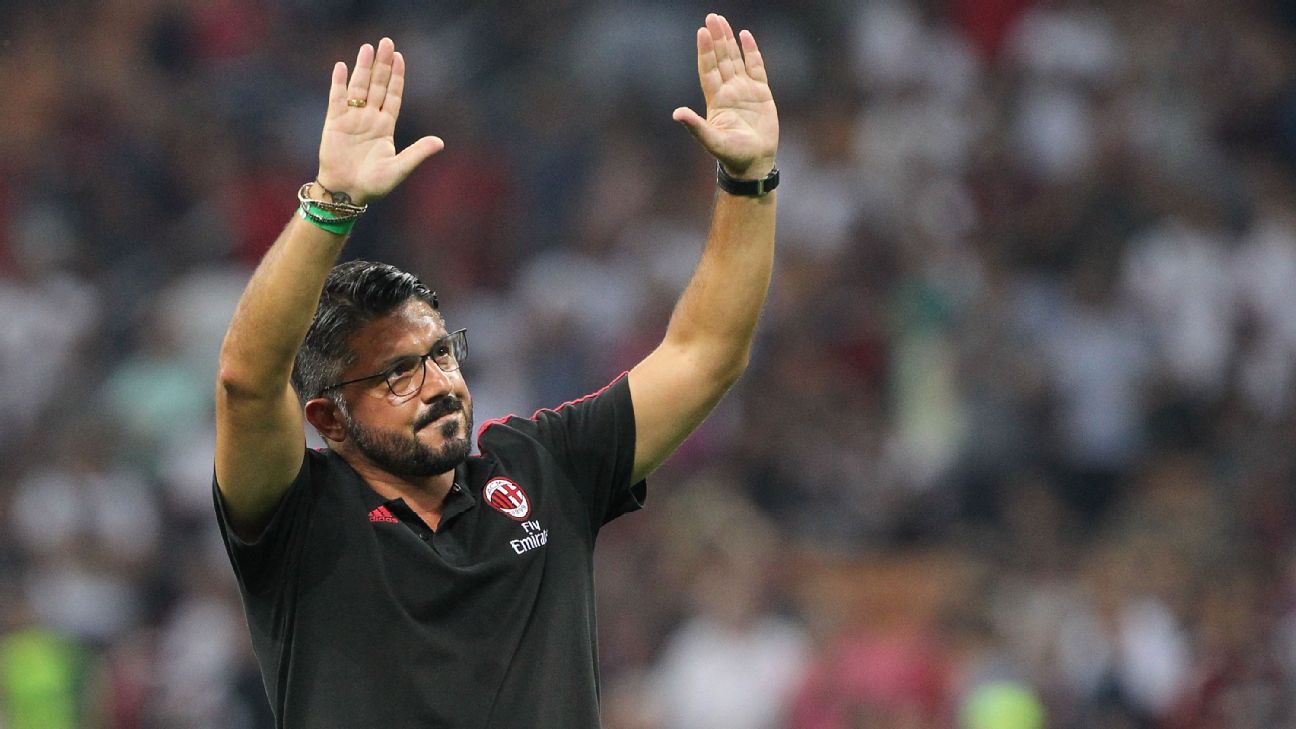 
Little more than four months ago, Gennaro Gattuso was unveiled as the new AC Milan coach. Stepping in after Vincenzo Montella’s stint in charge was brought to an abrupt end following a dismal start to the campaign, the 40-year-old has now committed his future to the club until 2021.

What has followed since his internal promotion, having coached the youth side previously, has been an impressive turnaround, both on and off the pitch. The club icon has not only led his side on an improved run of results, but with his grit, determination, passion and style of coaching, he has helped to reinvigorate the fan base amid further fears of disappointment.

Gattuso has now overseen 25 games in all competitions, securing 14 wins, five draws and suffering six defeats. That was sufficient for CEO Marco Fassone and sporting director Massimiliano Mirabelli to make the call to show faith in “Rino” and hand him the responsibility of taking Milan back to the top.

It’s been seven years since the Rossoneri last won a Scudetto, and 11 long years since they were champions of Europe. The more prominent concern in recent seasons has been to even qualify for a place at Europe’s top table.

Countless coaches have come and gone, even club legends Clarence Seedorf and Filippo Inzaghi couldn’t arrest the decline. Now though, the Milan hierarchy believe that Gattuso is the right man for the job to start moving in the right direction.

Taking his performance in this particular job in isolation, it feels like the right fit. Gattuso knows better than most about the culture at Milan and what it means to play for the Italian giants, with the responsibility to win when wearing the shirt.

He was a fundamental part of their last era of success, and having played under great coaches such as Carlo Ancelotti and Marcello Lippi, he will be well schooled in terms of what it takes to succeed from the sidelines. That was undoubtedly the initial concern for most Milan supporters. While there was no concern over his ability to fire up the players and play with passion and intensity, could he successfully outsmart much more experienced tacticians?

The results have been positive. For the most part, he has excelled in not only creating a more organised and methodical team, but bringing the best out of players like Leonardo Bonucci and Hakan Calhanoglu, who were struggling in the early part of the campaign.

Gattuso has overseen several impressive wins, dragging Milan back into the battle for the top four while booking a Coppa Italia final date next month. In turn, he has certainly earned the right to extend his stay in the job, and what a dream it will be for him to continue to be the Milan coach.

Nevertheless, there could be an argument that this announcement has perhaps come too soon. Following back-to-back disappointments against Juventus and Inter, coupled with the defeats to Arsenal in the Europa League, there is still a level that Gattuso and his players have to reach.

That’s not to suggest that those setbacks were entirely on his shoulders, as a lack of depth in the squad, inexperience as well as key individuals failing to perform to their capabilities have also been factors. However, perhaps the renewal could have waited until the end of the season, allowing Milan to gain a more complete picture of what Gattuso is capable of and if he can sustain the demands he makes of his players both in training and on the pitch.

With the renewal being confirmed, though, that can no longer be a concern. Naturally, the former Italy international was delighted to pen new terms, and the focus will quickly switch to finishing the season well with silverware, planning for the summer and regrouping for next year.

“I’m grateful for the opportunity,” Gattuso told the media. “Without Fassone and Mirabelli, I wouldn’t be here. I was given this chance and I’m happy to coach a glorious club like Milan. I thank my staff and the players for the trust that you’ve shown in me and we hope to bring Milan back to high levels soon.”

The positives in Gattuso’s tenure thus far undoubtedly outweigh any negatives. He has arguably done enough in the past four months to earn the long-term trust of the hierarchy, and it will be down to him to now repay that faith.

However, now come the bigger question marks. Maintaining the high levels set in recent months will be the minimum requirement. He’ll now have to show an aptitude for identifying weaknesses and efficiently addressing them in the transfer market while showing that his training methods work in the long run and ensuring that the side is constantly evolving.

Zlatan Ibrahimovic noted last week that he would “take Gattuso to war” with him. Being an inspirational figure to lead this side is only half the battle; he’ll now have to prove himself at the highest level as a tactician moving forward in order to restore former glories.