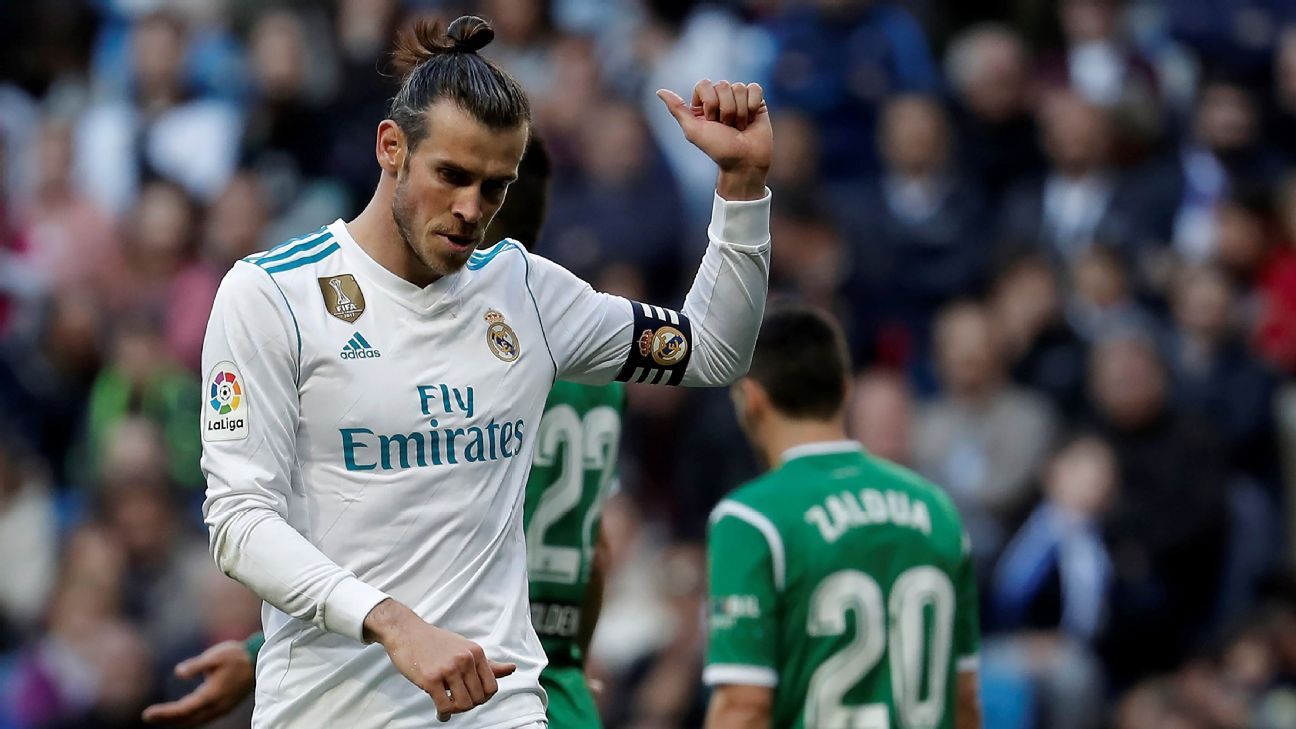 
Zinedine Zidane made 10 changes from the side that played Bayern Munich on Wednesday in the Champions League as Real Madrid beat Leganes 2-1 in La Liga on Saturday. They continue to eye Atletico Madrid’s place in the league, which would be some consolation after a poor domestic campaign, and they sit one point behind their city rivals after Saturday’s victory.

Gareth Bale scored and must be moving up the pecking order in time for the Bayern Munich game on Tuesday. He showed he is down but certainly not out in his fight for meaningful playing time at Real Madrid and shone among Zidane’s reserves.

Real Madrid’s B unit continue to falter. They beat a struggling Leganes side but many of the players picked to start are not up to the high standards demanded at the Santiago Bernabeu; this was evident with the whistling and general discontent in the stands when Leganes took over the game in the second half. Casemiro was forced to play 90 minutes and might have done with a rest.

7 — You get the feeling that Zidane would have rotated himself off the bench if he could have for this one. The Champions League is all he is thinking about and rightly so. He made 10 changes with rest for everyone bar Casemiro, who was sandwiched into the centre of his defence. He gave his reserves chances and still won albeit in unconvincing fashion.

GK Kiko Casilla, 7 — The reserve keeper didn’t have too many stops to make but kept his makeshift defence in line and made a goalline save in the second half with the score at 2-1.

DF Achraf Hakimi, 6 — His delivery is very good but he remains raw and shaky when defending. Switched off at the back post for Darko Brasanac’s goal.

DF Jesus Vallejo, 7 — Continues to improve when given chances. Showed off some very good passing and looked solid while keeping the strong and energetic Miguel Angel Guerrero quiet for the visitors.

DF Casemiro, 7 — Displaced for the good of the team. Lucky not to be booked in the first half for a foul on Nordin Amrabat. He made an important tackle in the second half that was timed perfectly and prevented a goal.

DF Theo Hernandez, 5 — Exposed on the left a couple of times but that’s natural with no left midfielder on his side to help out. Subdued going forward too and struggled defensively. Amrabat had too much time for the cross for Leganes’ goal. Continues to be a liability.

MF Marcos Llorente, 7 — Showed off his defensive instincts a number of times in the first half. Hardly involved enough to really claim he had a big impact but added balance to the side on plenty of occasions. Went missing when Leganes started to pile on the pressure.

MF Mateo Kovacic, 8 — The Croatian keeps knocking on the door of the first XI. He has the requisite talent to feature in most midfields in Europe. Completed 100 percent of his passes in the first half and won the ball back more than any Real Madrid player too. Replaced by Toni Kroos after 62 minutes.

MF Dani Ceballos, 7 — He got on plenty of balls in the final third and had chances but his confidence is lagging. He has the talent but has struggled to execute or show off his skills when given chances.

MF Gareth Bale, 9 — Real Madrid’s most dangerous attacker. He scored and was involved heavily in everything Los Blancos did in the attacking third. Had plenty of chances himself and participated in general play a lot too. His work rate on the right was impressive and general attitude was impeccable.

MF Borja Mayoral, 6 — Managed to poke home a cross late in the first half. Not the best goal but the kind of goal Karim Benzema has not been on hand to score this season. Limited involvement but got on the scoresheet.

FW Karim Benzema, 5 — Continues to be a shell of his former self. He has a handful of games to turn around his career at Real Madrid but with confidence and chances in short supply, it’s looking grim. Hardly involved and replaced just after an hour.

Toni Kroos, 5 — Came on for Kovacic after 62 minutes. He didn’t make Real Madrid any better or worse as a replacement for the Croatian. Real Madrid had lost the momentum when he came on and it never swung back in their favour.

FW Marco Asensio, 5 — He replaced Benzema after 62 minutes and made no discernible impact with Leganes laying siege to Real Madrid’s goal for the last half an hour.