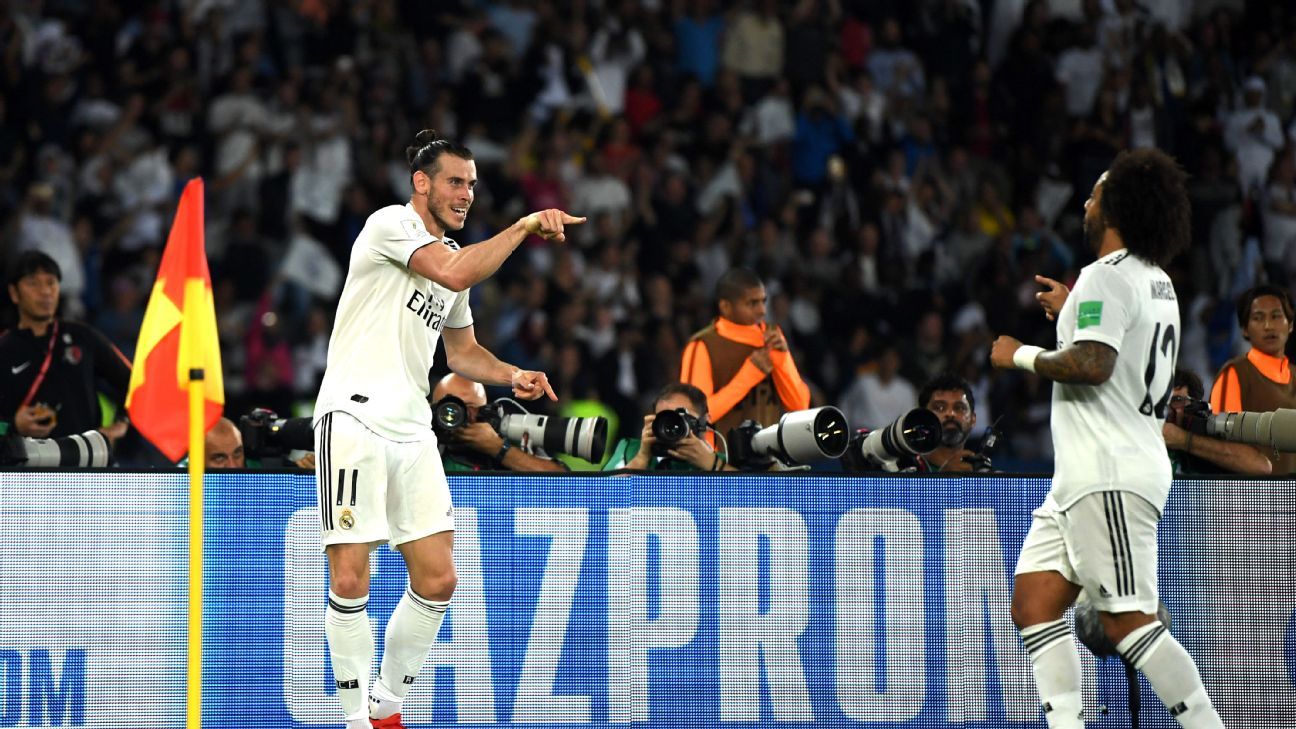 Bale clearly loves this competition and will have particularly enjoyed a hat trick which showed him as Madrid’s top man on the world stage. Goalkeeper Thibaut Courtois is looking well settled now, with two decent saves when the game was scoreless.

Madrid began the game at preseason pace, missing simple passes out from the back, and needing Courtois to look sharp after just two minutes. Slack defending at the end allowed the Japanese side’s Shoma Doi in for a consolation goal.

7 — Choosing his best available side was presumably a message from coach Santi Solari to take the game as seriously as possible, which his team did not fully get in the first half. Trusting Bale to return from an ankle knock worked out very well, while removing him early to keep him safe for the final was smart.

GK Thibaut Courtois, 7 — Again did well when he was needed with a full-length fingertip save after two minutes from Serginho, while his busier than expected first half also included a well-timed dash from his line when it seemed centre-forward Doi was clean through.

DF Raphael Varane, 7 — His pace came in useful when Kashima were pressing in the opening stages. He looked comfortable throughout and made a necessary intervention late when Kashima threatened to make it 3-2.

DF Sergio Ramos, 6 — A misplaced pass which led to Kashima’s chance inside two minutes began another of those Ramos performances when he knows he doesn’t really need to exert himself fully.

MF Luka Modric, 7 — Kept things ticking in Madrid midfield without ever breaking into too much of a sprint.

MF Toni Kroos, 7 — Moved the ball simply throughout while playing with the handbrake half on.

FW Lucas Vazquez, 6 — A nailed on member of Solari’s preferred XI now, Lucas was as usual mostly prominent for his work off the ball. Had a chance to shine at 3-0, when sent straight through on goal, but limply lifted an attempted chip straight into the keeper’s hands.

FW Karim Benzema, 7 — Another of those to play well within himself, Benzema had two half-chances to open the scoring but both were hit straight at the keeper. Showed a nice display of flicks and tricks in keeping with the exhibition pace of the game.

FW Gareth Bale, 9 — A first hat trick in almost three years for Madrid was made up of a driven low finish off the far post, a right-footer into an open net after Kashima’s defence disintegrated and a fiercely driven shot across the keeper and into the top corner. Three goals in 11 minutes before being withdrawn with a half hour to play to be preserved for the final.

MF Isco, 7 — Given just over 20 minutes to show he deserves more playing time, his best moment was a nicely weighted through ball to Benzema, who fired just wide.

MF Casemiro, N/R — Got the last 15 minutes as Asensio’s replacement on his return from a month out with an ankle injury, and was not sharp enough to stop Doi from getting a consolation for Kashima.