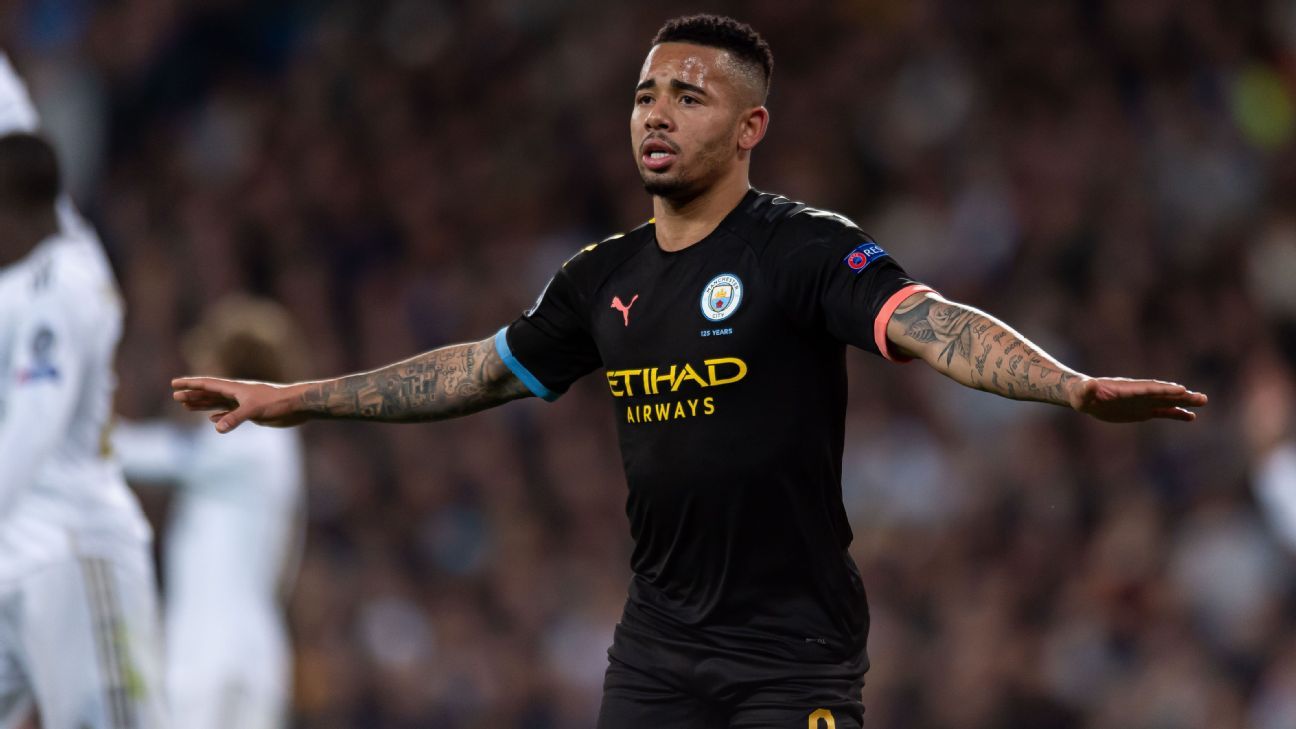 
Nearly six months have passed since the first leg of the Champions League tie between Real Madrid and Manchester City.

The teams meet again on Friday, and few can have been waiting as anxiously for the return game as Gabriel Jesus. City’s Brazil international had a fine game in his team’s 2-1 win in Madrid. He will be hoping for more of the same in the second leg, and a display that helps answer two of the questions that have been swirling around him: How good is he? And what type of striker is he?

Jesus hit the ground running when he joined City at the start of 2017, bringing plenty of confidence across the Atlantic with him. Still a teenager, he had already emerged as a possible solution to Brazil’s long-running centre-forward problem.

Thrown into the deep end a few months earlier, his senior Brazil debut was an undoubted triumph. With a third of the 2018 World Cup qualifiers played, Brazil were languishing in sixth place, and faced a tough game away to early flyers Ecuador. New coach Tite gambled on the youngster from Palmeiras, who just over two years earlier had been painting the streets of his Sao Paulo neighbourhood like an ordinary citizen in the build up to the 2014 World Cup. Jesus spent much of the game running into offside positions. However, in the last 20 minutes he turned an awkward goalless draw into an emphatic 3-0 win, first using his pace to win a penalty, then scoring two contrasting but equally brilliant solo goals.

He slotted in beautifully as Brazil turned a tough qualification campaign into a cruise, and in his early days at Manchester City he briefly put himself ahead of Sergio Aguero in the pecking order. The original, Brazilian Ronaldo even gave Jesus his seal of approval as his heir apparent. Greatness seemed within his grasp.

A few years down the line, things have not gone entirely to plan.

A key moment was the 2018 World Cup. Brazil played some attractive, attacking football before losing to Belgium in the quarterfinals. But Jesus did not contribute a single goal — seen as an embarrassment for a Brazil centre-forward. Even the much maligned Serginho and Fred, from 1982 and 2014 respectively, had managed to get their names on the scoresheet.

Tite made it clear that one of his big regrets was having persevered with Jesus. He was left out of the first post-World Cup squad, and though he was quickly back, he has not been handed the same role — instead he has featured on the wing. Tite stated that Jesus was happier there than he was at centre-forward.

Manchester City fans would probably agree. When Aguero has been missing, there have been grumbles that Jesus is not nearly as effective as a straight replacement. And if Aguero was briefly threatened by the arrival of Jesus back in 2017, for some time now there has been no doubt as to the identity of Pep Guardiola’s first choice centre-forward.

All of which makes the first Real-City match so interesting. Aguero was fit for the game at the Bernabeu, but Guardiola left him on the bench, and left everyone guessing about his tactical formation. After kick-off it soon emerged that he was not using an orthodox centre-forward. Bernardo Silva and Kevin De Bruyne featured as a pair of false nines. Riyad Mahrez cut in from wide on the right, and Gabriel Jesus did the same on the left.

It was one of the Brazilian’s best games for his club. He worked up and down the flank, putting in a defensive shift and troubling the Real back line. And then, in the closing stages, Guardiola introduced Raheem Sterling, who had not been considered sufficiently fit to play the full 90 minutes. Sterling went to the left and Jesus moved inside and, as players tired, space began to open up.

The comparisons between Ronaldo and Jesus founder on the difference in their physical development. True, Ronaldo first made his name as a skinny kid. But he quickly filled out to become an imposing powerhouse, capable of skill and subtlety while moving with the speed and force of a freight train. In contrast, Jesus has remained a relatively slender figure. Back to goal in tight space, it is harder for him to get into the game. He would rather have the room to turn and run at his opponent.

In the last few minutes in the Bernabeu, however, Jesus found space at the far post to head home the equalizer. Then, with City 2-1 up he ran in behind Sergio Ramos and was tripped on the edge of the area, bringing a red card for Real’s most important defender, and making City firm favourites for a place in the next round.

Perhaps, then, the error with Jesus has been the attempt to shoehorn him into a role that does not entirely suit him. He is not a new Ronaldo to lead the Brazilian attack, nor is he a like for like Aguero replacement. Instead, he is a versatile striker, capable of operating all across the attacking line, and of working back in defence as well. In February the Bernabeu came up with strong evidence for this point of view — maybe the Etihad on Friday will do the same.