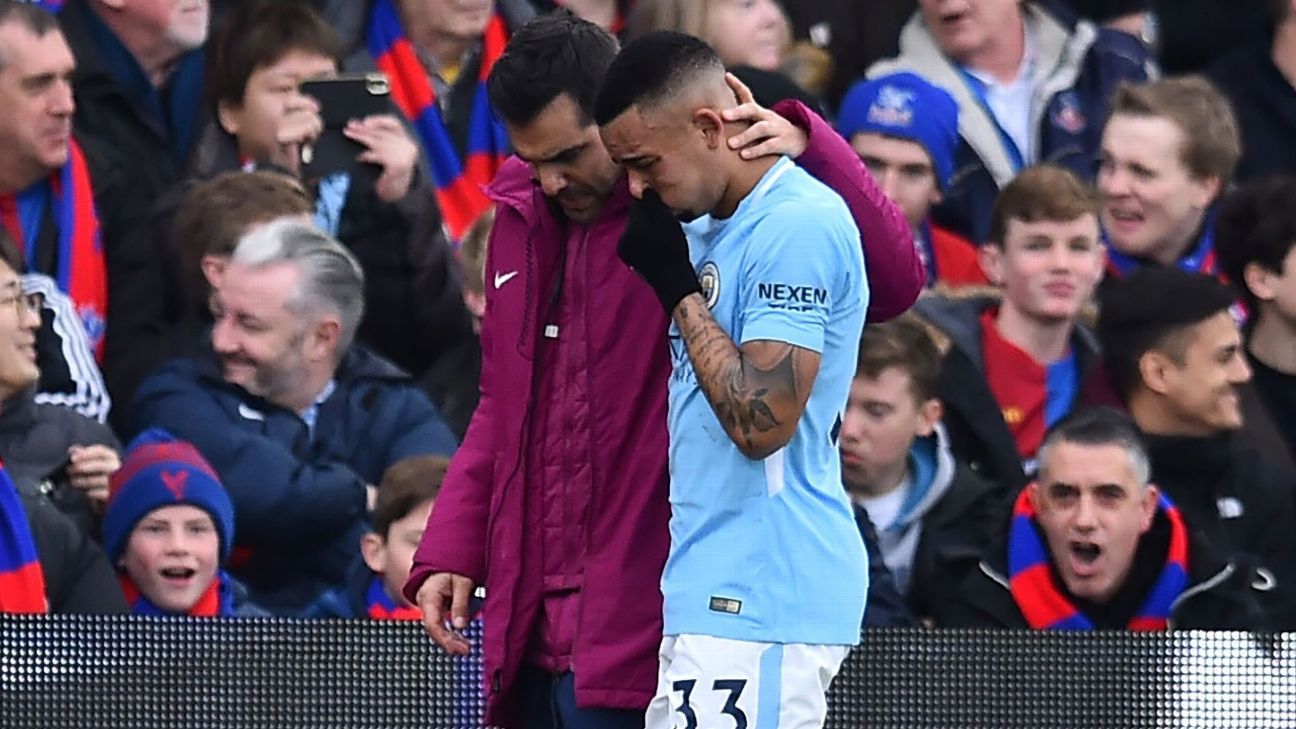 
Pep Guardiola has no doubt he could throw Gabriel Jesus straight back into action in the Carabao Cup final if fit.

Manchester City’s Brazilian striker is in contention for Sunday’s showpiece against Arsenal at Wembley, having returned to training after almost two months out.

The 20-year-old suffered a knee ligament injury in the Premier League leaders’ clash with Crystal Palace on New Year’s Eve.

City manager Guardiola also has no concerns about winger Leroy Sane’s fitness, with the German having now had run-outs of 33 and 45 minutes since recovering from ankle ligament damage.

Guardiola said: “I think they will be ready to play, if I let them. They will be fit. Leroy because he is a little bit better and Gabriel because it is mentality. He is a young guy and he is strong. He is a guy who will be ready.”

Sources have told ESPN FC that Guardiola will wear a yellow ribbon for the final despite his FA charge for displaying the symbol, which shows his support for Catalan politicians imprisoned after October’s unofficial independence referendum, in recent months.

Yet while that could create a talking point on the sidelines, in terms of the action City are focusing on claiming their first piece of silverware under the former Barcelona boss.

Guardiola is used to success, having won a combined 21 trophies in charge of Barca and Bayern Munich, but victory this weekend would still be significant in City’s ongoing development.

Guardiola will call on his vast experience of finals to calm any nerves in the squad. As a player his successes included two European trophies with Barcelona and an Olympic gold medal with Spain, while as a manager he has lost only once in nine knockout showpiece matches.

He said: “In the first finals you are more nervous than the next one. I try to say to the players, ‘Try to play more like in a friendly game, to be more calm.’ But also more courage there has to be.

“I think it’s a game we have to try to enjoy the most, it’s a final. We are here to play these types of game, so why to be nervous? Why worry about the win. It’s just a game.

“Have no regrets after the game. It’s too late for, ‘I didn’t do what I should do,’ because it’s a final.

“It’s good for our fans and the fans of Arsenal to be there and it’s a success already to be there. Now try to win.”

Should City succeed, there will be little time for celebration. The runaway Premier League leaders are back in action against the Gunners again on Thursday and then face Chelsea next weekend.

Asked at his prematch news conference if he would allow his players a drink if they win, Guardiola said: “I think talking about the celebration before the game is stupid, it makes no sense. Before the celebration we have to play a game. But normally there is no alcohol.”