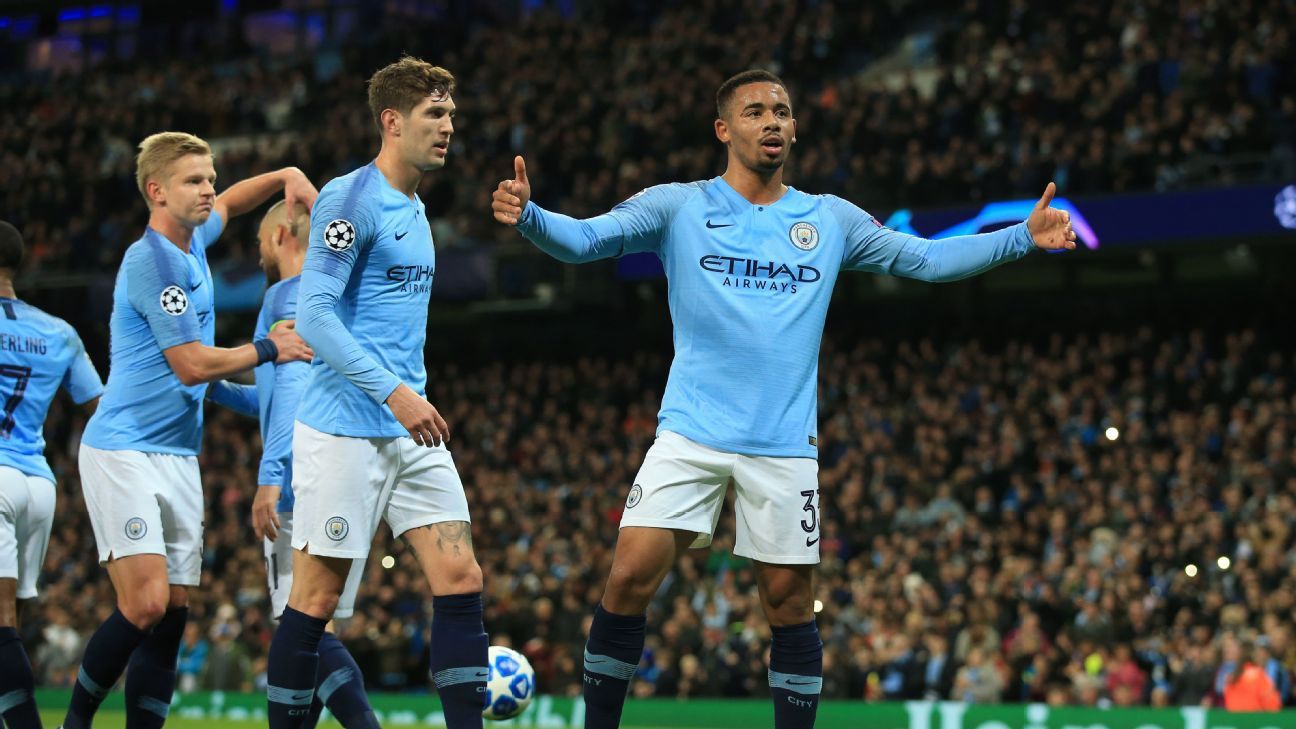 
MANCHESTER, England — Manchester City edged closer to qualifying for the last-16 of the Champions League with a comfortable 6-0 victory over Ukrainian champions Shakhtar Donetsk. Gabriel Jesus scored a hat trick with two penalties, including a controversial spot kick for City’s second, as they moved three points clear at the top of Group F.

Pep Guardiola insists that he doesn’t think City have the know-how yet to win the Champions League but his side easily controlled a match against a highly-experienced European side. Shakhtar gave City all sorts of problems last season despite a 2-0 defeat but, while they are not as strong this term, they were completely outclassed in a dominant performance.

Perhaps the only downside for Manchester City is that the Champions League isn’t already put to bed until February already with that shock defeat to Lyon on Matchday 1 meaning they need a win in France to be certain of finishing top of the group.

8 — Paulo Fonseca was awful brave revealing how he thought he could stop City and a master tactician like Pep Guardiola quickly unpicked his plan. City played around the press and never allowed the visitors to settle on the ball, destroying the visitors’ strategy.

GK Ederson, 7 — Another mostly comfortable evening when the small amounts of work required were done with minimal fuss. He pulled off one flying save from a free kick in the final quarter of an hour.

DF Kyle Walker, 7 — Bullied the Brazilian winger Taison with his physical dominance. He often offered an option to Riyad Mahrez and Bernardo Silva in attack as City cut open the visitors down the right-hand side.

DF John Stones, 7 — Another flawless performance from the central defender. Has added steel to his already clear ball-playing qualities.

DF Aymeric Laporte, 7 — An unflustered 90 minutes as he continues his role as City’s main defender. His reading of the game and passing were again impressive.

DF Oleksandr Zinchenko, 6 — A rare start for the Ukrainian and he has the chance to push for a derby start with Benjamin Mendy not at his best in recent weeks. He got forward well but Shakhtar’s most dangerous moments came down City’s left-hand side.

MF Fernandinho, 7 — So often a destructive influence by stopping the visitors attack, but showed his creative qualities as well with a defence-splitting pass that sliced apart Shakhtar on the second goal.

MF Bernardo Silva, 8 — He has developed a great relationship with both Mahrez outside him and his namesake inside and has the happy knack of seemingly always choosing the right option.

MF David Silva, 8 — Drifted through the game with the visitors unable to cope with his movement playing in between the lines. That was shown by the way he ghosted into the box for the opener, when he was unmarked six yards out.

FW Raheem Sterling, 9 — Switched to the left-hand side and was still as dangerous with his intelligent wing play. Sadly, his performance may well be remembered for kicking the floor leading to the 24th-minute penalty as much as his brilliant, individual strike.

FW Gabriel Jesus, 9 — He wasn’t about to pass up the opportunity of ending his three-month goal drought from the penalty spot. Added a second penalty before completing a hat trick with an exquisite lob, which will give him huge confidence after a tough time in front of goal even if his game has been otherwise good.

FW Riyad Mahrez, 8 — Started very wide, virtually on the touchline throughout, as Guardiola tried to stretch the Shakhtar defence. It meant he saw plenty of the ball and, while his end-product was occasionally frustrating, he showed his mastery with the assist with the opening goal and eventually got on the scoresheet himself.

DF Danilo, 6 — Steady cameo as he picked up where Walker left off.

MF Ilkay Gundogan, N/R — The German’s first minutes in more than a month after a hamstring injury.

MF Fabian Delph, N/R — Gave the important Fernandinho a brief chance to put his feet up ahead of the Manchester derby.