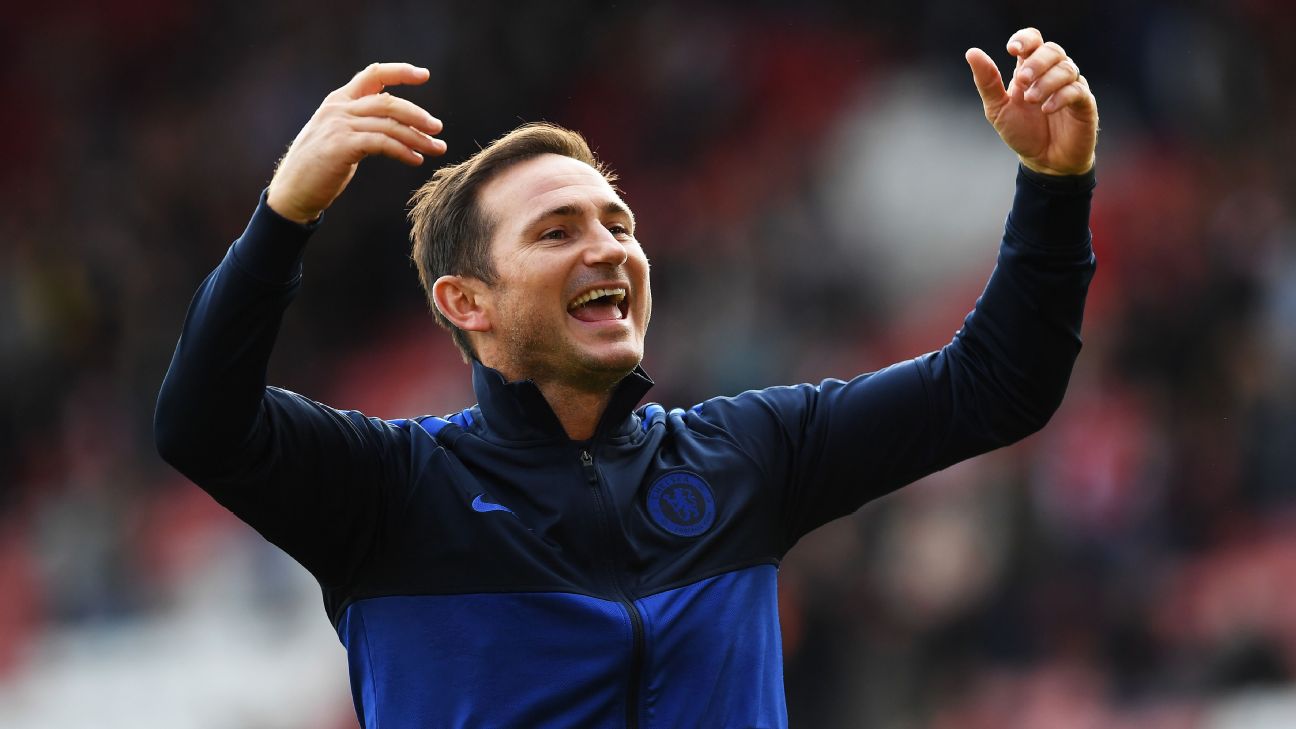 
SOUTHAMPTON, England — In the latter stages of Chelsea’s 4-1 win against Southampton, their fans launched into an adapted version of their hosts’ favoured song, greeting the sight of home fans streaming for the St Mary’s exit with a rousing chorus of “Oh when the Saints go marching out.”

This was not merely terrace banter, though. The reason those Southampton supporters were departing early was because they had seen their team so emphatically beaten; played off the park in the first half and easily held at bay in the second.

Frank Lampard’s Chelsea are a work in progress, a slightly ill-suited collection of youngsters — the average age of Sunday’s starting line-up was just under 25 — and whatever was left from the previous regime, meshed together to form a flawed collective, but while they are flawed, they also have the capacity to be truly excellent and very entertaining to watch.

In an odd way, they might look a little too good for Lampard’s liking because, with the various forms of existential crisis that other teams in the theoretical top six are experiencing, expectations are rising.

This victory, combined with the collapse of Tottenham, the infinite sadness of Manchester United and Manchester City’s toppling by Wolves, means Chelsea sit just two points behind the defending champions, admittedly in a congested section of the Premier League table.

Their only league defeat in seven games, since that increasingly weird-feeling thrashing by United on the opening weekend, has been to runaway leaders Liverpool. By reasonable standards, Chelsea are ahead of where most thought they would be with a fifth of the season gone. The question, then, becomes: How much further can they go this season?

“I’m pretty happy,” Lampard said after the game, when asked where he thought his side was in relation to preseason expectations. “Liverpool are out on their own, but at this early stage we’re in a nice position, in and around that [chasing] group. It should give us determination to go away and come back [after the international break] in the same vein. Because the minute you relax in this league it can all change very quickly.”

This game showed there is plenty to be happy about, beyond the basics of points and position. It began in the 17th minute when Tammy Abraham scored his eighth league goal of the season, a sensational lob after he took advantage of a minuscule moment of hesitation in the Southampton defence. Mason Mount, who netted the second seven minutes later, continued his remarkably assured start to life in England’s top flight.

Jorginho is the anchor holding everything together, directing and pushing the rest of the team to where they need to be, part orchestra conductor, part military general. And then there is Willian, about whom Lampard was effusive afterward.

“His work ethic off the ball; if we talk to the wingers about what we want from them, we’ll show them that video of what Willian did today,” the Chelsea boss said of the Brazilian international. “The last four or five games, he’s been our best player.”

It is also a decent indication of how Chelsea have been performing that Lampard thinks they should be even higher up the league. Twice they have taken the lead at home, for example, only to draw.

“I feel we’re a few points short of where we should have been on our performances,” he said. “I’m not saying that as bad luck, just being self-critical; there are games we should’ve won more points in, and that’s on us.”

There are still problems to address, and Lampard picked out how easily Southampton were allowed to “stroll through” the defence for Danny Ings’ 30th-minute goal. Fikayo Tomori had arguably his worst game of the season and was lucky to get away with some of his mistakes. That simply emphasises the points that, with so many youngsters in the team, consistency can be elusive at times.

There should also be caution about overreacting to this performance, given how limp the opposition was. Lampard said Chelsea were “comfortable” in the second half, while Southampton manager Ralph Hasenhuttl was particularly downbeat about his team’s display.

“We must be very, very honest and true to ourselves because otherwise we will lie and say we are better than what we played,” he said. “At the moment, we are not better. We know that we have to have a very, very good performance if we want to take something [from games like this]. But at the moment we are far away from a good performance.”

When asked if he could take Ings getting on the scoresheet for the second straight game as a positive, Hasenhuttl shrugged and said: “Yes, if you want to.”

Opportunity knocks for this young Chelsea team. They are far from perfect, a long way from the finished article and have many things to work on. But given the way the Premier League is opening up, a season of consolidation and making sure things did not go too badly — amid a transfer ban and with a new manager — could turn out to bring much more than that.

“The reason we’re playing this well is because of how hard we’re working and how together we are,” Lampard said. “If we keep doing that, we’ll be challenging right up there, I hope.”