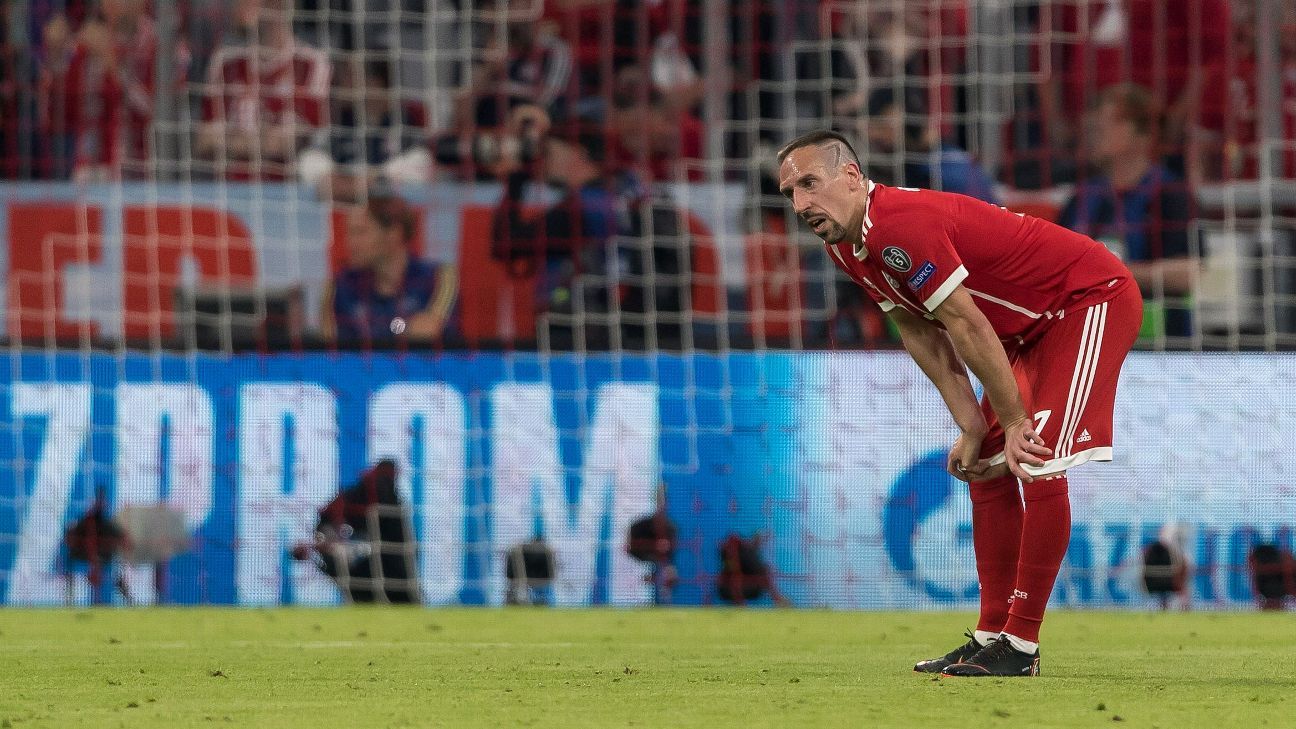 
It was a bad case of Champions League deja vu for Bayern Munich, again taking a first-half lead but eventually slipping to a 2-1 first-leg defeat against the holders Real Madrid.

Joshua Kimmich fired Bayern into a deserved lead on 28 minutes, but Marcelo equalised just before the break and substitute Marco Asensio took advantage of sloppy defending to score the winner on 56 minutes.

After losing the quarterfinal first leg 2-1 last season, injury-depleted Bayern went to the Bernabeu and won in 90 minutes to take the tie into extra-time. So, there’s still a chance.

Bayern are facing a fifth straight Champions League exit to a Spanish side. All the more galling as a strong first-half performance should have seen Bayern go into a two-goal lead. The game changed on Franck Ribery’s missed chance, by which time the German champions already had lost Arjen Robben and Jerome Boateng to potentially season-ending injuries.

Ironically, Real scored twice and didn’t even need Cristiano Ronaldo to find the net. Bayern have now technically lost each of their last six knockout games against Real in the Champions League — four in the semifinals and two quarterfinals.

6 — Jupp Heynckes’ hands were tied with the spate of unfortunate injuries, but his proud record of reaching the Champions League final at every attempt is in real danger.

GK Sven Ulreich, 7 — Largely unemployed for long periods and could do nothing about the “gifts” Bayern conceded.

DF Rafinha, 5 — Filling in for David Alaba at left-back, Rafinha’s horrible misplaced pass gifted Real the winning goal. Not a great audition for a new contract.

DF Mats Hummels, 6 — Some uncharacteristically sloppy passing, including one ball straight into touch. On the plus side, he was always a threat in the Real box and kept Ronaldo quiet.

DF Jerome Boateng, 7 — Came in with a proud unbeaten record in 29 games for Bayern this season, having not featured in the German champions’ losses, and Bayern were leading 1-0 when he hobbled off with a groin injury on 34 minutes. He must be a serious doubt for the return in six days, and his World Cup may also be in jeopardy.

DF Joshua Kimmich, 8 — Broke free and took advantage of acres of space to score with a tremendous strike (and woeful goalkeeping from Keylor Navas). Kimmich has now scored six Champions League goals, already six better than his predecessor Philipp Lahm who failed to score in over a century of appearances.

MF Javi Martinez, 6 — Went down in a heap in the search for an equaliser in the box, with Heynckes confirming at the news conference afterwards that Martinez was suffering from concussion. Martinez is always one of the first names on Heynckes’ team sheet, and he will need him back on Tuesday to have any chance in the Bernabeu.

MF Franck Ribery, 5 — He has failed to score in the Champions League since March 2015, and unfortunately for Bayern, Ribery showed exactly why in this one — taking a heavy touch when clean through on goal and wasting a brilliant chance to double the lead in the first half. He tried to repair a glaring miss in the second half, showing some great trickery to run Dani Carvajal ragged, but was again denied by Navas just before the hour.

MF James Rodriguez, 6 — The Real Madrid loanee started brightly, providing the assist for Kimmich’s goal, and caught the eye on other occasions before fading late on.

MF Arjen Robben, N/R – A sad end for Robben, picking up a groin injury against his former club in the opening exchanges. Not even the magic healing powers of Dr. Muller-Wohlfahrt could prevent his substitution after only eight minutes. With his contract up in a few weeks, this could have been Robben’s last Champions League game in a Bayern shirt.

MF Thomas Muller, 5 – The captain toiled industriously, but after failing to control a chance in the opening minute he never looked like adding to his club-record tally of 42 goals in the Champions League.

FW Robert Lewandowski, 5 — Did Lewandowski fail his Real Madrid audition? He missed a marvelous chance to put Bayern back into the lead when his tame header went straight at Navas. Largely anonymous throughout, this was another big game where Bayern’s top scorer has failed to turn up.

MF Thiago, 6 — Replaced the injured Robben to bolster the midfield early on. However, Thiago couldn’t make an impact overall and showed his frustration with a foul and subsequent yellow card in the final minute.