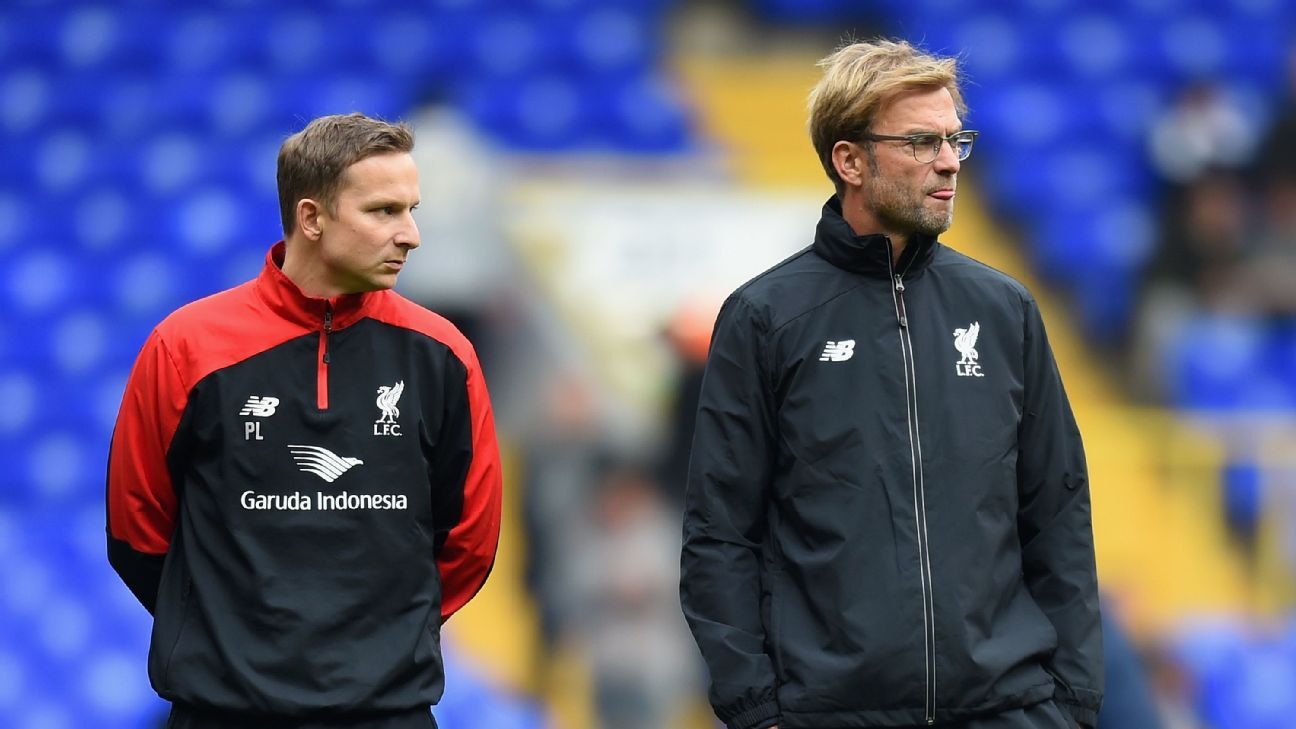 
NIJMEGEN, Netherlands — Pepijn Lijnders could very well still have been an integral part of the Liverpool coaching staff that is 90 minutes away from the Champions League final. Instead, he is managing a NEC Nijmegen side that is being whistled and jeered by their own supporters for every backwards pass and error 16 minutes into their penultimate game of the regular season with the scoreline at 0-0. Even though they are bidding for promotion to the Eredivisie

Expectations are sky-high in Lijnders’ first job in management, having left his position as first-team development coach at Liverpool at the start of the year.

“It’s just more responsibility,” he tells ESPN FC in an exclusive interview. “That’s what I wanted. I wanted to feel the pressure that comes with it and to manage a team that plays the same style [as Liverpool], but with a little bit of me.

“I love it. I really enjoy each day — even the hard moments when you lose and the day after you have to find the right words to motivate the players again to let them see the big picture.

“This club is an emotional club. I always try to be the counter. If everybody around me gets emotional then I try to be calm, so I try to be a different Pep. Normally I was the one giving emotion and all that stuff [at Liverpool] because that’s what the team needed constantly.”

The decision to leave Liverpool was not one taken lightly for Lijnders. The 35-year-old was aware an offer was forthcoming, but had just one day when it landed to decide whether to accept it during a Liverpool season that had the potential to be historic.

By the time Lijnders was confirmed as NEC head coach, Liverpool were fourth in the Premier League and a month out from competing in their first Champions League knockout tie for nine years — against Porto, where he previously spent seven years as a coach.

The Dutchman had always wanted to be a manager, though. He felt he was ready to take the plunge long before Jurgen Klopp’s arrival at Liverpool in October 2015.

“I knew [it was going to be a special season],” he said. “That’s why it was so difficult to make the decision.

Neither Klopp nor Liverpool stood in his way. The pair were extremely close during their time together, with the German at one point stating he was unable to imagine “how it would be without him”.

The influence Klopp has had on Lijnders is clear. He says they share the same “blueprint on the way we work,” while NEC now follow the exact same training regime as Liverpool’s current one, with identical exercises included.

“Jurgen constantly gave me advice,” Lijnders continues. “He was always busy with: ‘Your day will come and when you’re there, please, please stay strong in the beliefs, even when you get knocks. Keep believing in the way of playing’.

“Even in life, that’s the strongest advice you can give. I had to remember that a few times. He analyses really quickly, he never forgets. He’s a very strong personality, but is a good human being as well for the people around him. Above all, he was really important for me. One of the most important people in my career.”

NEC now head into the last game of the Eerste Divisie season on Saturday needing to beat Dordrecht and hoping Fortuna Sittard slip up in order to secure automatic promotion. If Fortuna Sittard hold their nerve, NEC still have a chance of going up through a complex playoff system. But the demands placed upon NEC mean it’s promotion or bust.

Lijnders describes his new role as one that “doesn’t let you switch off.” A day off begins with a coffee and a newspaper at home, perhaps then continuing with a visit to his parents. It ends at 4 p.m. Then it’s back to preparing the week’s training sessions to a meticulous detail.

The job at NEC has brought Lijnders back to Broekhuizen, where he spent his childhood. He left the village with a population of less than 800, situated close to the German border, as a teenager to pursue a career in coaching. Now he can only enjoy the tranquility after a win.

He has learnt the hard way that the manner in which you have to present yourself as the man in charge is “everything.” NEC are unbeaten at home this season but inconsistency away from home has provoked heavy criticism from supporters and the media.

“Normally I wanted to go in-depth tactically to explain processes and why we do things,” he says. “Now you’re talking to a lot of people who look to the game by just winning, losing and just a few nice goals. I try to keep it more simple.”

He is fully aware managers depend on results, but is confident the five-year plan NEC have formulated will give him time to implement his ideas at the club.

Having only had one week in Marbella, Spain, to work with his players after his appointment, plans are already in place to make the most of a six-week preseason.

He estimates he had around 40 ideas he wanted to implement as soon as he took charge, but, in reality, has only been able to put two or three in place. “I had to learn to keep it simple, to work on one or two things instead of five,” he says.

“When Phil Coutinho lifts a ball into the top corner in training, you’re like: ‘Wow’. I see that happen here, not as often, but I see loads of good things.

“I wanted the half year to prepare the team for the rest of the journey together. I felt that if I could work in the half year, whatever happens after, they are more prepared. The style of playing 100 percent pressing and 100 percent counter-pressing is a style that doesn’t [arrive] in two, three weeks — if you remember the time with Jurgen.”

Even though NEC boast one of the biggest budgets in their division, the resources and support structure available, when compared to Liverpool, are in a different stratosphere.

“It’s difficult to compare and I had to adapt really quickly because otherwise you get frustrated by everything,” he says. “By everything, I mean everything.

“That’s what a head coach or manager has to do: He has to adapt to what you get, what you have, see the positive things, enjoy the processes. We did that really well. I was not for one moment frustrated. I saw the differences, but I was not frustrated.”

His first job at Liverpool in 2014 was coaching the Under-16s side, containing Trent Alexander-Arnold and Ben Woodburn, before forming the “Talent Group,” where the club’s best youngsters got the chance to train at Melwood and impress management on a weekly basis.

He will always have faith in young players due to their eagerness and willingness to learn. With the scoreline 0-0 at half-time in last Friday’s must-win game, Lijnders introduced 17-year-old Ole Romeny in the second half, handing him his first extensive action in professional football.

Romeny’s introduction ignited NEC and they scored twice to win 2-0. “My new Ben Woodburn, hey?” Lijnders smirks while walking back from the next day’s recovery session. “The head coach or a manager is one of the most crucial factors if a youth player makes it or not because he has to make the decision to put him in.

“For example, when we gave Ole 45 minutes in such a big game. That says everything. The academy can be a real advantage for every club. But I try to do it now by taking them to the first team and putting them in, training them in a certain way and making them ready.”

Lijnders has spent pretty much half his life coaching football, but a short stay in the inferno that is management has already been an eye-opening experience. However, he feels it is all part of a learning curve that keeps him out of his comfort zone.

“That’s the good thing about contracting a young coach. In eight weeks you get a new one and then the next eight weeks again,” he concludes. “You always adapt and learn.

“I have to win everything still, so that’s a big advantage. It’s only three and a half months. It feels like three and half years! What a great experience. Whatever job comes next, whatever club comes next, I’m prepared for it 100 percent.

“I want to keep fighting to win prizes, but only in a certain way. I want people to feel the identity of my team every game, wherever we play, against whatever opposition. They have to feel that we dominate, press and are offensive and aggressive in defence.”