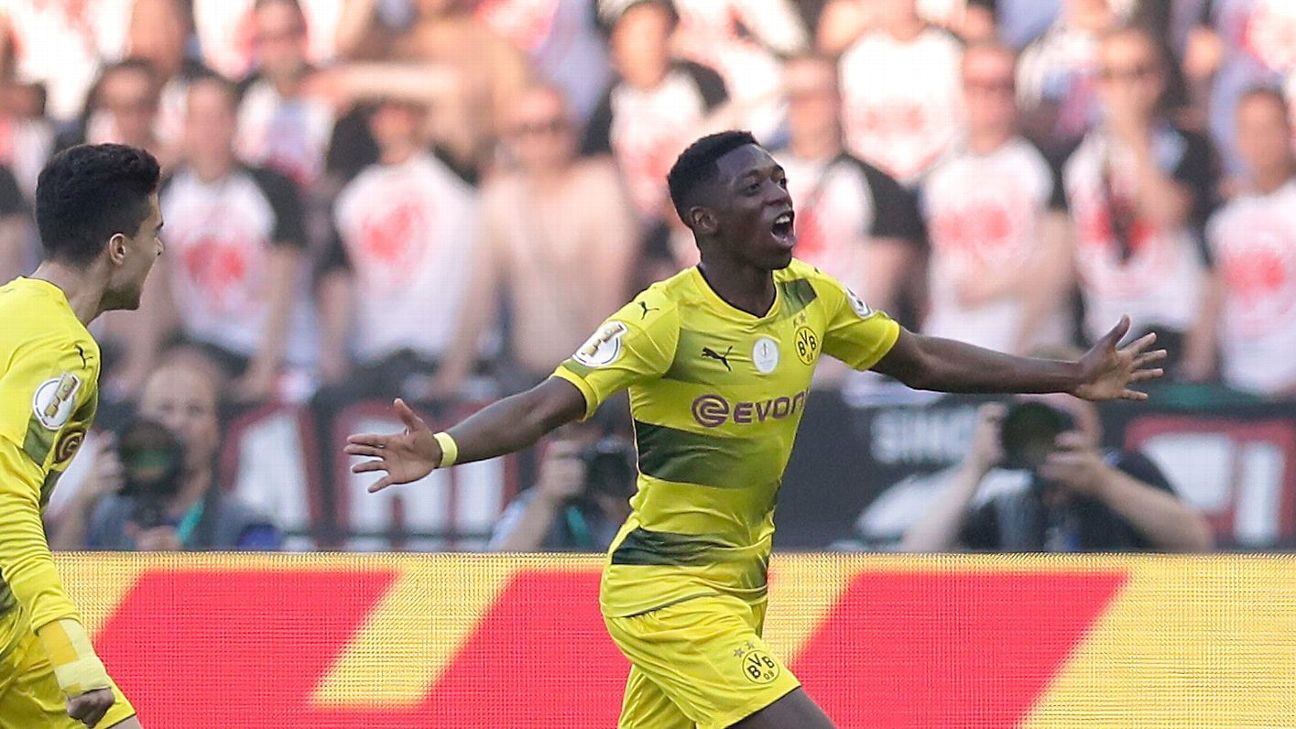 
The Ousmane Dembele transfer saga is the latest in a spectacular transfer window. The 20-year-old could join Barcelona for up to €150 million after Borussia Dortmund turned down a first bid for the France international.

But who is he, and how did he become that valuable?

Growing up in the northern parts of France, Dembele joined Stade Rennes as a 13-year-old in 2010. Four years later, in 2014, he was promoted to the club’s reserves and soon made a name for himself, constantly finding the back of the net.

His performances did not go unnoticed with Manchester City, and also Gerard Houllier, scouting for fresh players for the Red Bull project, chasing the teenager.

Houllier hoped to land him for Red Bull Salzburg. Having already played a key role in the transfer of Sadio Mane to Salzburg, the former coach now offered Dembele the chance to join his boyhood friend Dayot Upamecano in Austria.

But despite Salzburg offering €2m for the player, who had yet to make his senior team debut, Stade Rennes made it clear that Dembele was not for sale . And while, according to L’Equipe, the talent threatened to quit football altogether on the final day of the 2015 transfer window and leave for Senegal, he remained at the Ligue 1 club. He soon signed a new three-year deal in France. And so his rise began.

In November 2015, Dembele made his Ligue 1 debut against Angers, and soon scored his first goal as a professional. Now he was not only in Houllier’s and Manchester City’s scouting books, but was being chased by a host of Europe’s top clubs, including Barcelona, Manchester United, Liverpool, Bayern Munich and Arsenal.

Despite eventually signing for Dortmund in June 2016, the case of his transfer was still unsettled in June 2017.

“Dortmund told me that I will play if I can perform well,” Dembele told goal.com about his decision for the Bundesliga side.

3. At Dortmund, his meteoric rise continued

And he performed well. It took him three matches to set up his first goal in Germany’s top tier, and just one more to open his own account in BVB’s 5-1 away win at Wolfsburg in September 2016.

Despite still being raw, he soon turned himself into a major force in BVB’s attack.

By the end of the year, he had played in all but one match for BVB with coach Thomas Tuchel trusting the already free-floating winger with a more central role in Dortmund’s plan. He added a much-needed element of surprise to the club’s buildup play, conquering the hearts of fans with his runs and dribbles in central midfield.

In 49 matches for Borussia Dortmund in the 2016-17 season, Dembele scored 10 goals and set up another 21. He averaged a league-best 3.2 dribbles per game in 32 Bundesliga games played, according to whoscored.com.

Those dribbles made him a target for his opponents, and following fouls he tends to lose his cool. “I think it’s gotten better,” Dembele told Kicker in May. “But I can’t fully rule out that I lose my temper sometimes.”

4. He has full skill set and is a fast learner

The winger has a whole skill set to offer when it comes to dribbling. He can play with his left foot and play with his right foot, and, indeed, sometimes he even forgets which one is stronger. His two-footedness makes it even harder for Dembele’s opponents to anticipate his next move. He’s also equally strong when playing with the inside or the outside of his foot.

The 20-year-old loves to take the ball into the centre of the field, running into the final third from the outside, and thus opening space for the full-backs to cover. When nearing the box, Dembele either cuts inside to get into position or plays the final pass.

Following his first goal for Dortmund, Dembele said, “It depends on the situation. Whenever I see that a teammate is in a better position, I will pass the ball. And certainly, I do sometimes try to shoot myself.”

He’s good at that, too. Although largely working as a feeder for Pierre-Emerick Aubameyang, the France international scored 10 goals of his own over all competitions, with his strike in the German cup semifinal against Bayern Munich securing Dortmund’s passage to the final. Receiving the ball with his right foot inside the box, Dembele moved the ball to his left while at the same time escaping David Alaba’s challenge. He then curled the ball into the far top corner of the goal.

His sometimes-sloppy decision-making got better during the season too. Although this process is far from over.

In June, while on national team duty, Dembele laid into Borussia Dortmund. Having been part of a smaller group of players with BVB backing Tuchel, he soon made his frustration over the cup-winning coach’s sacking public.

“I am disappointed. Thomas has always been there for me and taught me a lot. He’s a very good coach with whom I had a lot of great moments,” Dembele told Sky Sports.

This interview was the first indicator that the France international was prepared to leave the Westfalenstadion after just one season, even more so with a door opening for him at his dream club, Barcelona.

Even before missing training in early August, there were signals Dembele’s heart was no longer in Dortmund. He was involved in a training fight with keeper Roman Burki, and sources from within the BVB camp said his general attitude in training had reached a low point.