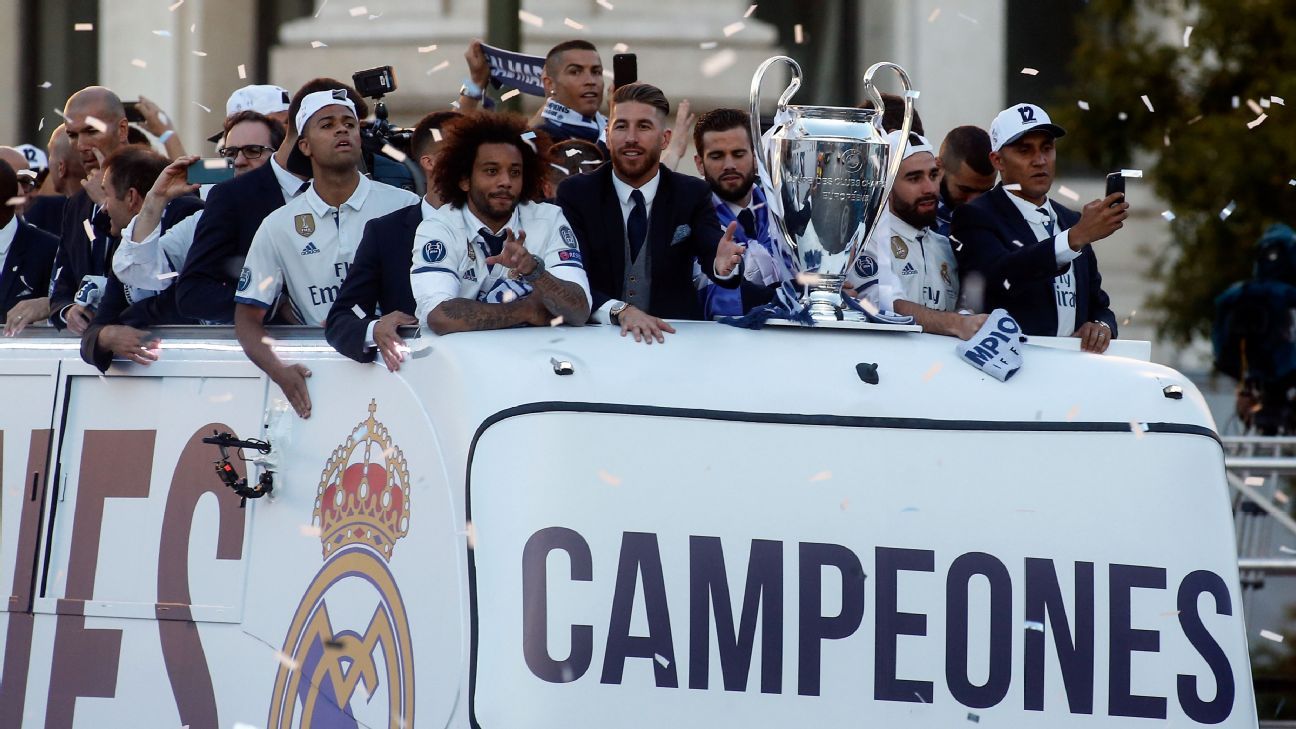 
By the time the transfer market closes, Real Madrid could have won another two trophies, which would hypothetically constitute the sixth and seventh of Zinedine Zidane’s 19-month, apparently anointed reign as manager. Not a bad ratio if he can pull it off.

If that happens, it would take a braver (or more foolish) man than I to state definitively that because they begin this season in a slightly more anaemic shape than they finished the last, Madrid won’t be able to punch as powerfully between now and May. But I definitely think they are weaker at the time of writing.

Los Blancos are Spanish, European and World champions. That is not only an exceptional achievement but also one that is a rarity even for the mighty Madrid. To even attempt to suggest what specifically would make them “better” and how to achieve that might seem impertinent. But great football teams, like sharks, need continuous forward momentum if they are to survive, let alone thrive.

They don’t need constant change or constant instability. Also, they need no stagnation, relaxation or complacency. Keep the tail fin high, teeth sharpened and sensors on alert for both danger and the opportunity to strike.

At any rate, whether or not they defeat Manchester United to win the UEFA Super Cup and beat Barcelona across the home/away Supercopa de Espana, here are five key areas in which Madrid must be intelligent, diligent and strong if they are to continue to thrive under this extraordinary man known as “Zizou.”

The only reason that the saying “it’s easier to get to the top than stay on top” sounds like a cliche is because it’s a truism.

One of the most magnetic, powerful and addictive components of sport is that apart from the true believers, everyone else wants to see whether, when and how the champions will be toppled. The previously defeated suddenly find new vigour, while the victorious often find better things on which to expend some of their greatness. It’s part of the human condition.

It has irked Madrid, unsurprisingly, that Barcelona have been so venerated since Pep Guardiola took over in 2008. Some of that had to do with Messi, some had to do with the playing style, and some of it was about the extraordinary nature of that shimmering 2011 Champions League final performance. There were myriad factors, but if you ask the core players of that Camp Nou reign, they’ll place very high up the ladder of priorities the fact that they stayed hungry. It was instrumental in their ability to keep winning the Spanish title.

This makes retention of their La Liga crown the No. 1 priority for Los Blancos, their manager, the players and the fans. Or, at least, it should be.

Since May 6, 1990, Barcelona have won back-to-back titles six times; Madrid have done so just once in what is now approaching three decades. Madrid will never be a club to renounce the conquest of Europe, but to increase the hallmark on this Zidane era and add to its sheen, his squad must win the Spanish title again this term.

I have declared loud and clear that I’ve found the Zidane era exciting, satisfying, admirable and compelling. One of the things he has done, brilliantly in my view, is direct the outlook, atmosphere and daily training regime toward a meritocracy. That has been a key part of the squad’s trophy success: There’s an atmosphere that there are no teacher’s pets and super-stardom is not the first criterion of who plays and how often. There’s also a bigger buffer between the president’s views and the first XI than there has been for a long time.

Another thing that excites me about the coming season is that Madrid have once more reduced the average age of the squad and opted to draft in more “home-bred” talent. The ones to watch are Jesus Vallejo, Marcos Llorente and Borja Mayoral. Perhaps we’ll see more of Achraf Hakimi and Alvaro Tejero, too — two budding young bucks in defence. Throw in Theo Hernandez, newly prised from Atletico but still only 19, and 21-year-old Dani Ceballos, and you appreciate that generally, Madrid have accepted the strategic importance of investing in talented youth.

Not only is it interesting and exciting, but it’s also commendable, too. It helps breed “identity” and spirit while also engaging the fanbase. Madrid were poor on this front for a long time. It’ll take patience, though, from the president and down through the fans and those parts of the Spanish media who type their copy while wearing a Madrid scarf or drinking their coffee from Los Blancos‘ mugs.

There’s no criticism when I say that the Bernabéu can be a tough audience. They demand flair, consistency, drama and “we’ve got this in the bag” assurance all in the same game. Some of their demands are incompatible. When you are between 18-21 and trying desperately to carve out a firm foothold on your place at this club, pure talent isn’t enough. It needs lashings of character, stubbornness and a hide that is rhino-thick.

Llorente, in particular, looks a shimmering talent. However, for each of them, there will be periods of “one step forward, two steps back” while they bed in and gain confidence and experience.

All of this also needs the network around Zidane to get the mentality right, hitting the sweet spot somewhere between ultra-demanding and ultra-supportive. How easy does that sound?

That said, if Zidane and crew can carry this off, the rewards are pretty special. Just ask Barça.

Since they achieved it back in February 1984, a whopping 33 years ago, Madrid have only once defeated Barcelona in both Liga Clásicos. Once upon a time, that didn’t prevent Madrid from winning titles and having pockets of four or five years when they were superior to the Catalans. Yet the league, once again, will be won by one of those two.

Over those 33 years, there were spells when Athletic Club, Real Sociedad, Valencia, Atlético or Deportivo would win the title. Right now, particularly given the impact of their transfer market ban, even Atleti look to be without arms long enough to reach for the venerated trophy.

If Madrid can win home and away against Barcelona this term, and if they produce anything like the “rest of season” form they’ve produced the past several years, that will pretty nearly guarantee that they become champions.

Strategically, it has to be one of Zizou’s main aims.

I need to explain my earlier remark about how Madrid, at the time of writing, looked slightly less robust and more anaemic than when last season finished. Not only did Zidane breed a “we’ll beat you no matter the circumstances” mentality within his squad and among the club’s fans, but he also had the armoury to achieve some really dramatic “turnaround” wins.

My basic point here is about goals. Alvaro Morata and James Rodriguez provided 31 goals between them across all competitions, and that’s a brutal, brutal loss. OK, perhaps Kylian Mbappe will arrive and take a chunk out of that. But if he doesn’t, and if Madrid don’t sign an additional footballer of similar goal potential, this becomes a big question for them.

Are there sufficient “extra” goals in Lucas Vazquez, Marco Asensio, Isco, Mateo Kovacic, Theo (from set pieces) and Ceballos to match that “Madrid always have a magical late goal in them” feeling that has made them irresistible the past two seasons?

That Madrid bench, when Zidane got everyone singing from the same hymn sheet, looking equally motivated and pulling for one another, was ultra-muscular. Will it be as strong this season? I reckon that’s one to talk about.

Without any question whatsoever, Zidane has been the special element at this club the past two seasons in almost innumerable ways.

You’d call him the real “Special One” if it weren’t Manchester United and Jose Mourinho that they’re facing this week. We don’t need pre-match cat-fighting over a nickname. He has brought intelligence, equilibrium, unity, flair, excitement, motivation, diligence, professionalism and success. That’s one helluva CV.

What’s interesting now is the extent to which president Perez is “on the ball” regarding Zidane’s future. Two-thirds of the way through last season, Zidane talked about not having planned for this one, about not taking it as guaranteed that he would even be in charge.

That was fine: a tactical admission. Then he won the title and the Champions League. End of debate, more power to Zidane.

But how best to not just retain him but also stimulate him to work as hard, as hungrily, as enjoyably and to keep him in the mindset where he’s able to inspire those around him? (Not just his staff but his players.)

This is a vital task for Perez and his advisors. It isn’t a “treat him well, or you’ll lose him” concept. Not at all. It’s a “recognise that he is a magnificent asset who is young enough, fit enough and competitive enough to keep growing this football club for significant time if he’s properly invested in, protected and respected.”

Over to you then, Mr. President.