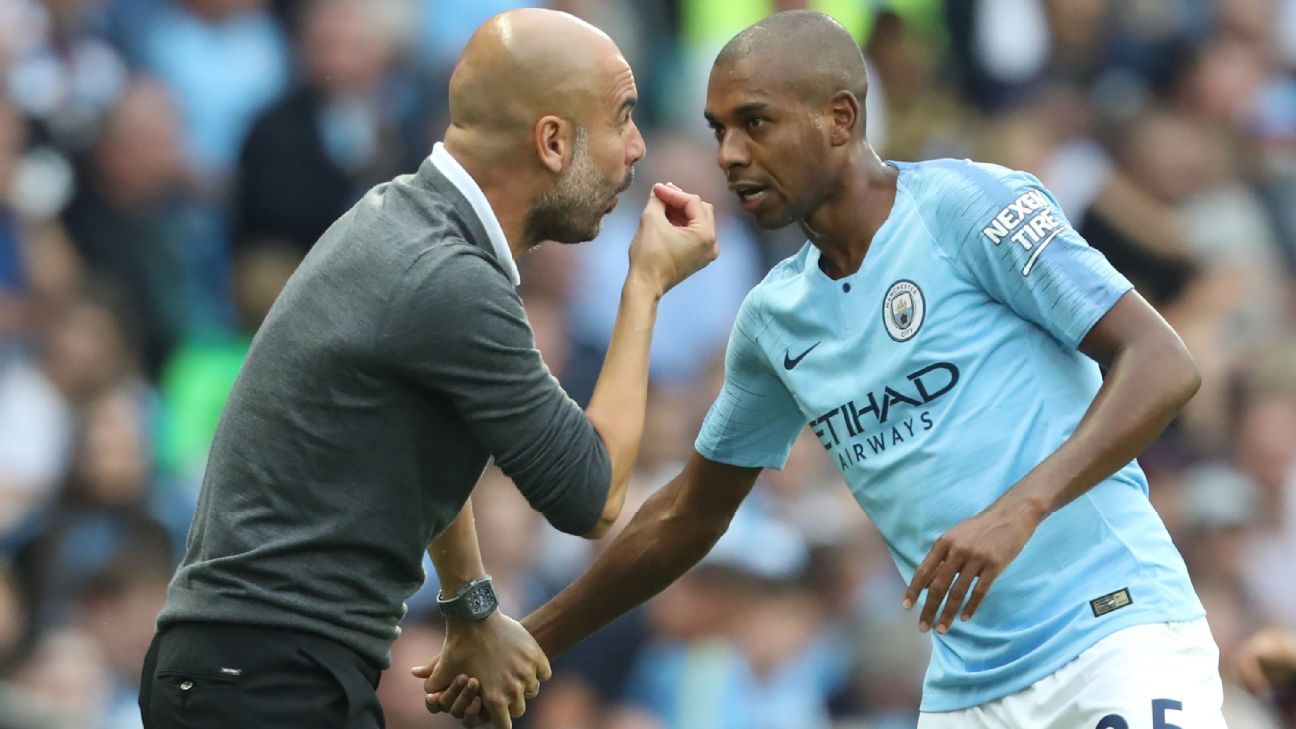 
Fernandinho Luiz Rosa was born 33 years ago. There are no records as to whether he tackled the midwife or took intelligent possession of the obstetrician’s stethoscope in the delivery room of that hospital in Londrina.

A lot was made of this relatively insignificant milestone during the summer, when Pep Guardiola was widely reported to be shopping for a player in the Brazilian’s position. It was said that the tough-tackling, hard-running game demanded of the player sitting in the hole between central defence and midfield — and in City’s case, a midfield constructed almost entirely of attack-minded players — required special feats of resistance that might be beyond somebody of such advanced footballing years.

Evidence of Guardiola’s concerns appeared to come from City’s failed bid to persuade Jorginho and his advisers that life in Manchester could match that in London. For whatever reason, the Napoli midfielder decided London had more of what he required than the north of England. London is England’s capital, so it was a sound enough decision. Chelsea offered him considerably more money, another logical reason to opt for the glittering streets of Kensington, but — on purely football grounds — it might be said that the Italy international missed a trick.

Fernandinho, then, was left to go at it alone in the sacred space between the ball-playing antics of his defensive colleagues and the mesmeric meandering of his midfield cohorts. Would the old man be able to keep it all together, experts asked?

Firstly, Fernandinho’s game has long been one of expert economy of movement, with a step to the side here and a lunge forward there often deemed to be more than enough to achieve what he is stationed on the field for.

City’s game, so expansive in its possession of the ball, leaves the Brazilian with a watching brief across the park and up and down the central axis. Although he is often the last man making a telling defensive tackle or the man on the edge of the box taking a pot shot, his game is about maximum security and clever but restricted movement.

When stretched — and this can happen, owing to City’s emphasis on shooting forward en masse — he is also one of the best perpetrators of the snide nudge on any opposition runner attempting a swift counter-attack. In short, neither his legs nor his age should impede him from doing the classic covering job for at least another season.

The trouble starts when, or if, City find themselves competing in the latter stages of four competitions. Fernandinho, like all others, deserves a rest from time to time and needs to be kept fresh for the important battles that surely loom ahead. This is where Ilkay Gundogan can play his part. Unable thus far to impress sufficiently to hold down a regular spot, the German is adept at running hard between the lines, finding the simple out pass and being back in time to bolster defence. He is sufficiently adept at all of these things to have shown up on Barcelona’s radar of late. He is, in the current structure, too valuable to let go, however.

Whether rivals will see City’s failure to recruit backup in this part of the team as a possible area of weakness remains to be seen. Already during the opening weeks of 2018-19, a number of approaches to stemming the sky blue tide have been launched.

Arsenal took the refreshing route of not watering their pitch before the opening game of the season, presumably in the vain hope that City’s passing game would founder on the frazzled grass of the Emirates. Some hope. They were dismantled.

Wolves and Newcastle took the opposite views that City could be attacked or should be contained. The former survived well enough, the latter lost by a goal but spent long periods of the game chasing shadows.

So far, Liverpool’s strategy (invite a new manager, who has a curiously successful record against Guardiola-managed teams) appears to have worked best. Despite being spanked 5-0 at the Etihad early last season, Jurgen Klopp’s planning got the better of Guardiola at Anfield in the return league game and in both legs of a fraught Champions League quarterfinal.

The fast-moving energy of their play allowed Liverpool to build up such a head of steam that City became disoriented and lost on three occasions. This cannot be put down to luck. Having said that, few teams have the personnel necessary to employ such tactics, and few clubs have a manager brave enough to exercise them without a little glance at what might go wrong at the other end.

With Fernandinho patrolling the central areas, how to beat City remains the biggest unanswered question in the Premier League.