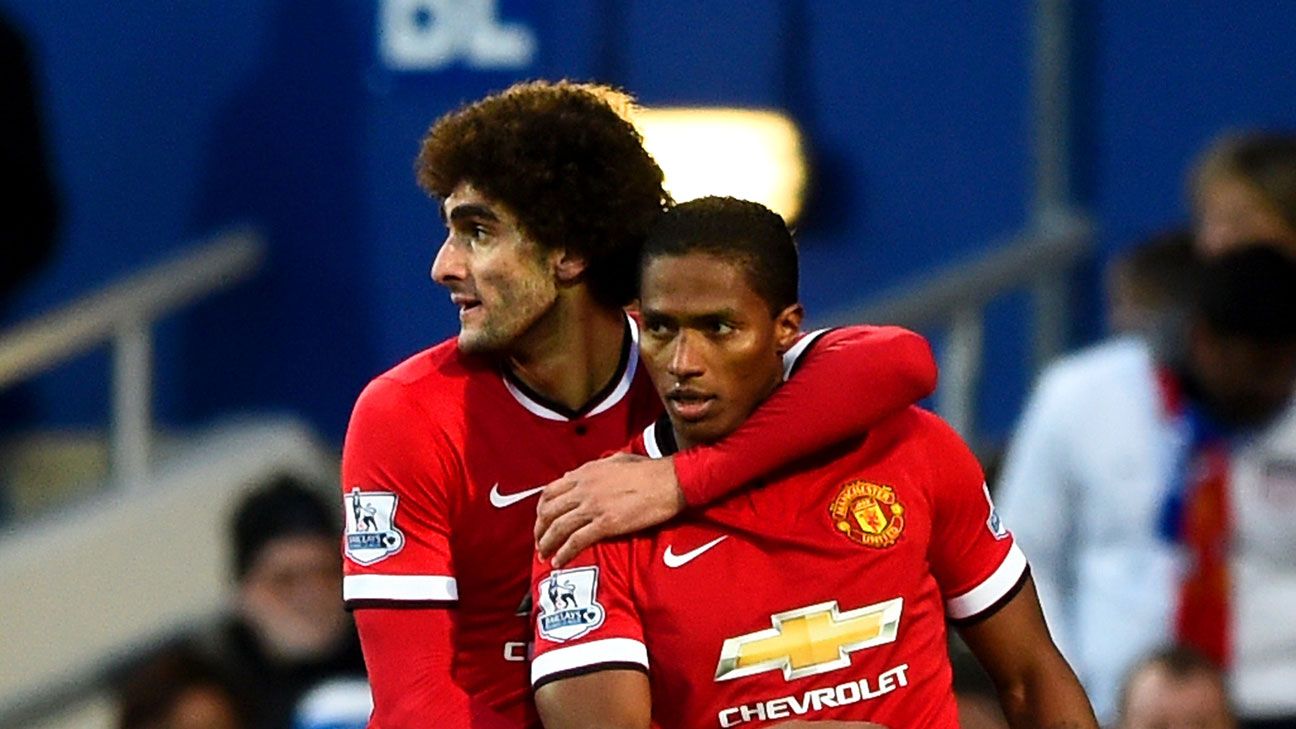 
Manchester United are a club that rarely give second chances. But when they are deserved, players can flourish. In the 4-0 win over Crystal Palace at the weekend, they started with three who have now become central to their ambitions.

With two goals against Palace, the most obvious of these is Marouane Fellaini — a late arrival in David Moyes’ first transfer window and the lightning rod for the discontent of so many supporters. The Belgian midfielder has been in excellent form of late, but let us not allow revisionism to creep in — though he did not deserve the venom he received, Fellaini was unarguably poor for his first few months at the club. Since then his use of the ball has improved significantly.

Notably, he now passes the ball sharply through the lines whereas before he would have shifted it meekly sideways, allowing the retreating defenders to regroup. Part of the reason for that must be the confidence that Jose Mourinho has reawakened in him, but he deserves his own credit.

There was a time when Fellaini’s presence in midfield meant an absence of pressure on the ball whenever United were not in possession. Now he is on the opposition’s toes the moment a stray pass enters his vicinity. His name on the teamsheet or his appearance on the touchline is no longer greeted with trepidation by fans, but with a sense of comfort that he can get the job done.

In recent matches he has even relaxed enough to add the odd flourish to his game — a backheel here, a pirouette to retain possession there. He will never be an Anthony Martial, in that regard, but in the right context he can be an equally devastating asset.

Another player who has travelled far without leaving Old Trafford is Ashley Young. Berated publicly by Roy Keane and many others for his diving — the former going so far as to say that he was not a United player because of it — Young has emerged as one of the club’s most surprising survivors.

Remarkably, he is now in his seventh season at United, during a stay which has seen him occupy almost as many roles as John O’Shea used to. It is difficult to remember now, but Young was once one of the most thrilling wingers in the Premier League, capable of breaking down teams with his passing and dribbling and of finishing with either foot, from close range or distance.

He has now reinvented himself as a full-back, capable of playing on either flank, and though he is not elite in this role he is diligent enough to produce reliable and useful performances. It is a mark of his professionalism that Sir Alex Ferguson, David Moyes, Louis van Gaal and Mourinho have all trusted him at various stages.

And then there’s the most impressive of them all: Antonio Valencia. Few players would have had the humility to adapt their game in the way the Ecuadorian has.

Formerly a winger of rare directness, Valencia can now claim to be one of the best right-backs in England — a sentence that still looks startling on the page, but which is borne out by two seasons’ worth of consistency.

And, like Young and Fellaini, some flair is returning to his game. Granted, the opposition was only Crystal Palace last weekend but, in the first half, he took the ball and surged through three or four challenges. It was the type of thing you’d expect to see from Henrikh Mkhitaryan — or, more poignantly, from the 2011 edition of Valencia himself.

Valencia, in his ninth season, is now on the verge of his 300th game for United and the affection and respect for his performances continue to grow. His testimonial should be an emotional occasion not only because of what he has brought to the club but also because he has managed to endure.

Fellaini, Young and Valencia have all found themselves again, for which Mourinho can take some credit — but we can’t forget the contribution of Van Gaal, who often deployed these players to great effect. Van Gaal got a great deal wrong at United, but he understood the value of the less-heralded squad player, a winning trait he has in common with Mourinho.

These three players, who few could have seen surviving at Old Trafford at one point, will be increasingly crucial to United’s title challenge in the months to come. They are the unlikely champions of the club’s ethos; not readily associated with its traditions of flowing football, but the surprisingly sturdy foundations upon which that play is now laid.