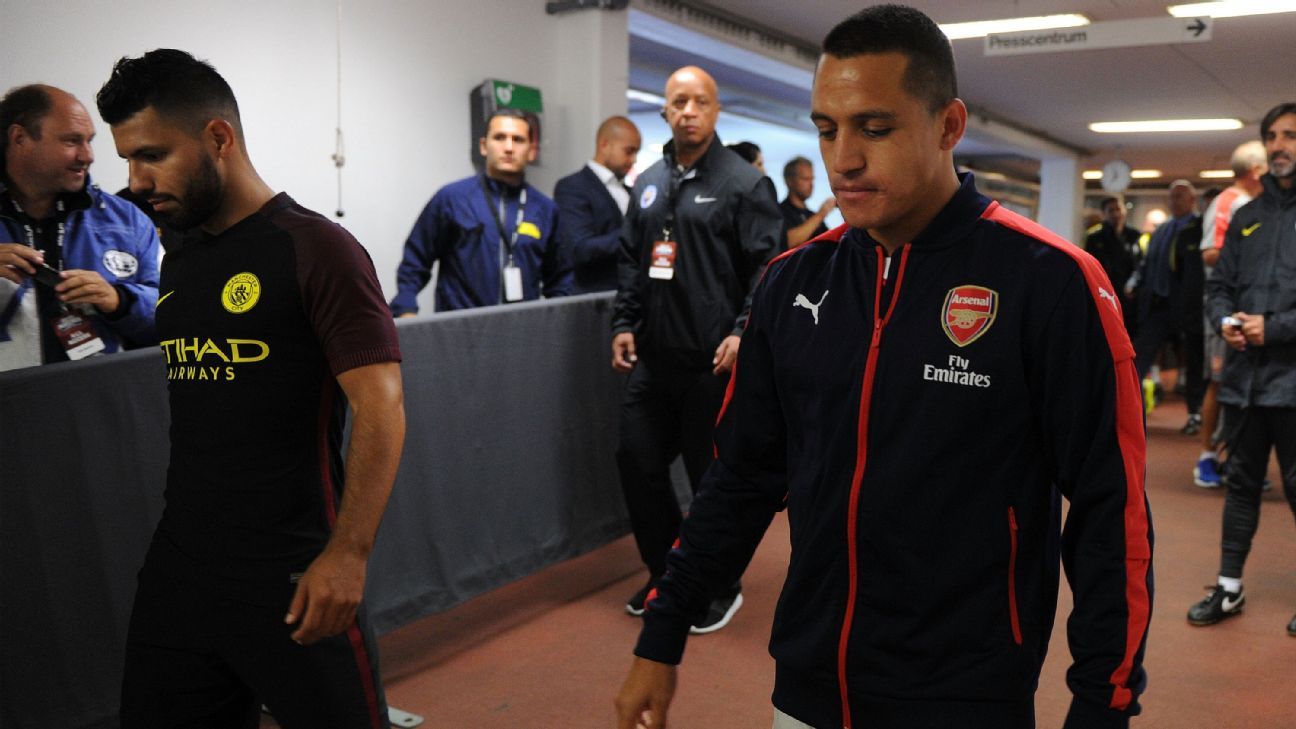 
The idea Arsenal and Manchester City would agree to exchange star men Alexis Sanchez and Sergio Aguero, as suggested by a couple of UK tabloids over the weekend, seemed utterly fanciful — but it would be a deal that could work for all parties.

Admittedly, swap deals rarely happen and there have already been denials, but Sanchez’s work ethic and versatility across the frontline could be ideal for Pep Guardiola. Aguero’s deadly finishing skills are what Arsene Wenger has been missing since he sold Robin van Persie to Manchester United in the summer of 2012.

A swap of South American stars could solve significant questions for both managers. Both clubs would lose players idolised by their fans, but bring in an experienced replacement that could quickly assume such status to render the other a fond memory.

With Wenger agreeing to stay for two more years, the outstanding item in his in-tray remains the futures of Sanchez and Mesut Ozil. Both his two most expensive signings have just a year to run on their contracts, with the ability to sign pre-contracts for new clubs looming in January.

Sanchez headed to the Confederations Cup in Russia with Chile’s national team with little sign of a resolution, his name instead linked with a host of suitors, including City, Manchester United, Paris Saint-Germain and Bayern Munich. Though he starred in Arsenal’s FA Cup final defeat of Chelsea, scoring the first goal in a 2-1 win, there had been public signs throughout last season that all was not well.

On-field tantrums following a 3-3 draw at Bournemouth in January and during that 10-2 aggregate punishment by Bayern Munich in the Champions League suggested someone not blissfully happy. Sanchez, though known to enjoy life in London, is not a great mixer with his colleagues, though that has been his habit throughout his career.

Despite that, losing Sanchez this summer would be a heavy blow to Wenger’s credibility, especially after his own contract extension did not receive universal approval from Arsenal fans. Starting the season badly, and without Sanchez, would undoubtedly lead to the Emirates once again ringing out with dissent, and Arsenal Fan TV springing into frenzied overdrive.

Guardiola, with last season’s third-place finish and trophyless campaign a disappointment, should expect protest if Aguero was allowed to leave. So too would chairman Khaldoon Al Mubarak, who declared in May there had “never been a doubt” Aguero could leave Manchester.

That rather flew in the face of that spell in January and February when Aguero was benched in favour of Gabriel Jesus, who very much looked Guardiola’s chosen one during a sequence when City played the brand of Barcelona-style football the Catalan genius was supposed to bring to the Etihad. Jesus’ willingness to work back in midfield and press the opposition seemed a far better fit than Aguero, who previously preferred to conserve his energy for his self-possessed pursuit of goals.

Had Jesus not suffered a fractured metatarsal at Bournemouth in February, and Aguero not reclaimed his starting place to then score 15 goals in 19 matches while also increasing his work rate, then his future could have been in more doubt.

“He will be here next season,” said Guardiola after City’s final match of the season. “Happy? Good. Perfect.”

Guardiola would surely enjoy being able to add Sanchez to his forward line, as someone who offers similar variety and industry to Jesus, and from the wings as well as the central position in which he impressed during the first half of last season.

When the pair worked together previously, during Guardiola’s final season at Barcelona in 2011-12, Sanchez faded in the imposing wake of Lionel Messi but if Aguero was not around, the Chilean should find it easier to flourish.

And Aguero, even if Arsenal complete the signing of Alexandre Lacazette from Lyon, would be undisputed first choice at the Emirates. His supreme ability to convert the multitude of chances his prospective new team usually create could haul Arsenal back to the top four at the least.

For Guardiola, moving on Aguero, with just two years on his own deal, could offset that problematic situation when a manager decides to phase out a leading man whose presence on the bench will always lead to questions being raised.

It will almost certainly never happen, but an Aguero-Sanchez swap would make significant sense.