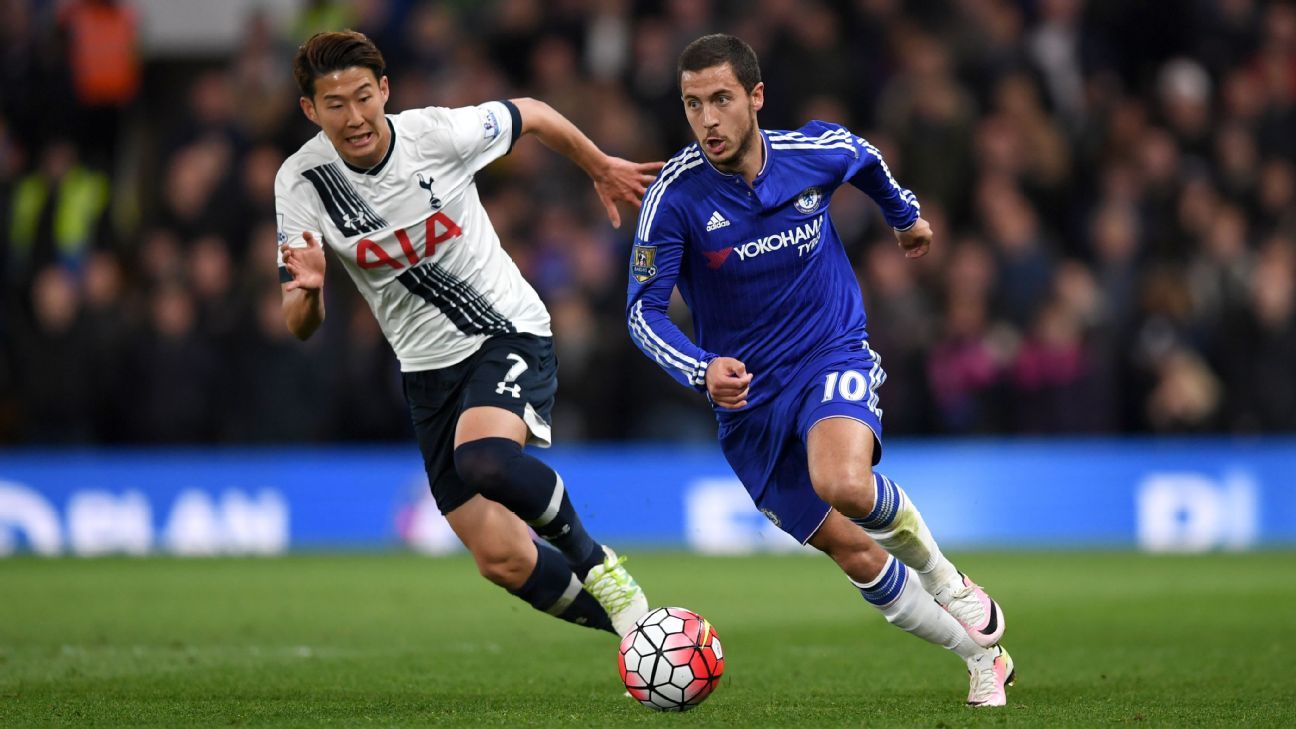 
It could be seen as the tale of two strikers; one hot, the other not. One has seven goals in his past five games, the other just one in 2018. Except that Son Heung-Min is not a specialist striker at all. He is the scoring winger, Alvaro Morata the non-scoring striker.

When Tottenham visit Chelsea on Sunday, the probable front men can be seen as opposites. Yet their respective managers have certain similarities in their thinking. Mauricio Pochettino and Antonio Conte have a preference for target men in attack and a fondness for false nines as a Plan B.

They have a shared willingness to omit the full-time forward in favour of a man thrust further forward than he would ideally play. Chelsea hosted Barcelona and went to Manchester City with Eden Hazard operating as the supposed spearhead; on each occasion, both Morata and Olivier Giroud were on the bench. When Spurs go to Stamford Bridge, it will not be a controversial call if Fernando Llorente — World Cup and European Championship winner, £12 million signing and scorer of 15 Premier League goals last season — is a substitute so Son can lead the line.

The Spaniard’s meagre tally of five goals — three in a 12-minute burst against League One Rochdale — in 28 games for Tottenham follows on from Vincent Janssen’s wretched return of six, four of them penalties, in 36 outings last season. Son’s combination of potency — 39 goals in the past two seasons alone — plus pace, a can-do mentality and effervescent energy means he has emerged as the most compelling deputy to Harry Kane.

The top scorer has an ankle injury. Tottenham can instead turn to the winger who outscores most strikers and who has a proven capacity to compensate for Kane’s absences. The Englishman missed nine league games last season; the South Korean scored six times in them. He is the uncomplaining understudy who can double up as a first choice in another position.

His use as the stand-in striker has been an unqualified success. Hazard’s has been altogether more mixed. It is perhaps his third best position, and while he diplomatically said this week he was happy to play wherever Conte wanted, the critics of his use as the lead attacker include the Belgian himself.

“We could have played on for three hours, and I [still] wouldn’t touch a ball,” he told HLN after the 1-0 defeat to City. “You have the impression that you’ve ran [a lot], but that you haven’t played a game of football.”

It highlighted the downsides of selecting Hazard out of position. He is not built to hold the ball up; he is not suited to being stranded 30 yards from the nearest teammate. His reinvention as the false nine began at Leicester in January 2017. It was a piece of leftfield thinking fashioned because Diego Costa was dropped after a training-ground row and continued in part because of Conte’s enduring lack of faith in Michy Batshuayi when, before Giroud arrived, he only had once centre-forward he trusted. It seemed a ploy forged of both inspiration and desperation.

But it enabled the Italian to construct a fluent, mobile front three with Pedro and Willian, all capable of interchanging positions. It is a formula that has worked this season at Huddersfield, Qarabag and, despite the scoreline, at Watford, but not at City or Everton, games in which Chelsea failed to score. The surprise factor is gone. One theory is that, if Hazard is to lead the line, it should be against lesser opponents, enabling him to confound old-fashioned centre-backs by giving them no one to mark. Against the best, however, the Belgian can become a fringe figure, without a target man to bring him into the game.

In contrast, Son starred as a striker when Spurs beat City last season. Conte talks of wanting a “point of reference” in attack. At their best, however, Morata, Costa and Kane are the comparative rarities of target men who bring perpetual motion. Llorente may be too static to suit Spurs. Pochettino prefers Son’s mobility.

And the stand-in strikers have more differences than common denominators. Hazard is more of a No. 10 or an inside-left, Son more a quick, direct winger. The Belgian is likelier to look for space between the lines, the South Korean to run in behind defences and stretch the game for others — Dele Alli and Christian Eriksen in particular. Hazard is more of a false nine, Son closer to a genuine one.

Son wins, on average, more headers per game and loses fewer. Neither is a target man, but he does a better impression of one. Son averages more shots, fewer key passes and dribbles. He is more direct, more of a player who, in past eras, would have been a speedy second striker and more of a predator. But in that respect, he has more in common with Batshuayi, the finisher who delivers a goal every 112 minutes for Borussia Dortmund and had a still better ratio for Chelsea, though Conte rationed his appearances.

It underlines the different stances of the two managers. When Hazard operates as a false nine, it has been a vote of no confidence in others, whether the out-of-favour Batshuayi or the out-of-form Morata, that runs the risk of making Chelsea’s most gifted player less influential. When Son does, it is a statement of strength in its own right.