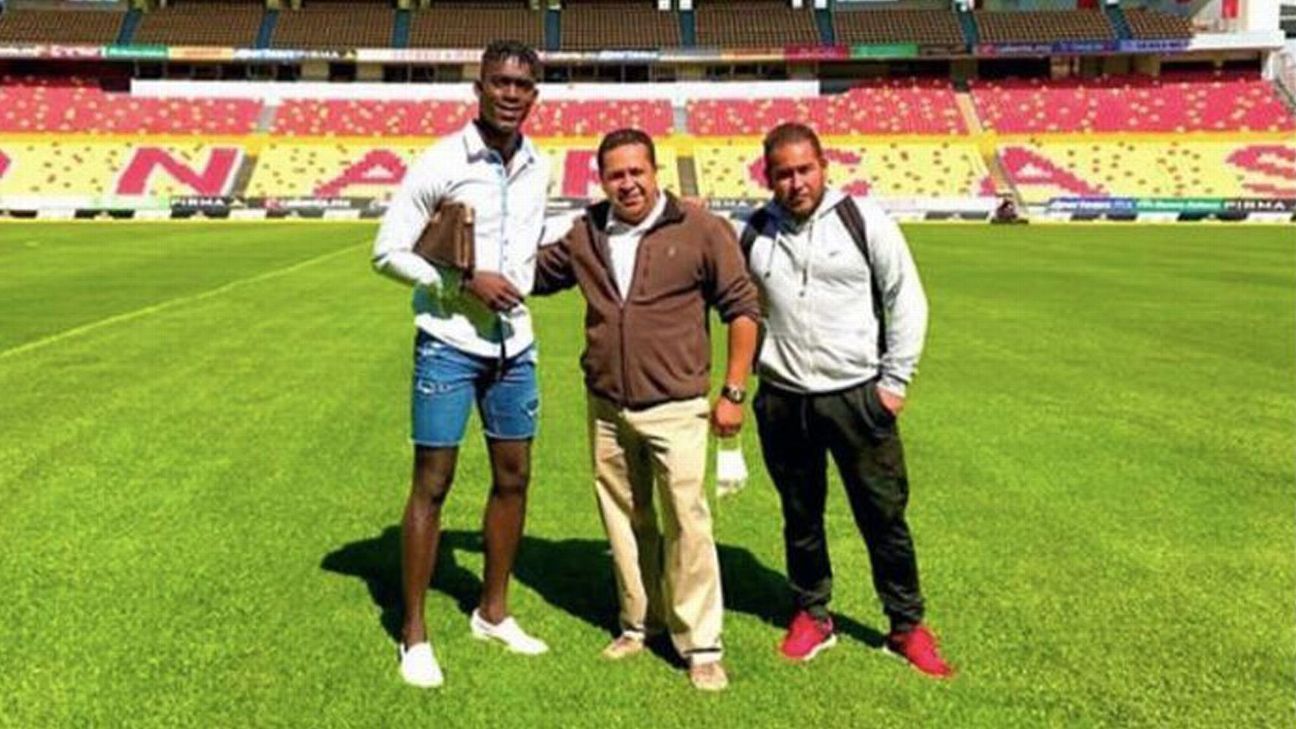 
Photo on the pitch inside the stadium (complete with designer wash bag)? Check. Questions taken from local press answered? Check. A pledge to “bring back joy” to the fans? Check.

Ecuadorian Jhon Minda, 22, appeared to be close to becoming an Atletico Morelia player in Mexico‘s second-tier Liga de Expansion. The club’s sporting director had even made the claim in local outlet Ecos del Quinceo that “until the contract is signed we can’t say it’s done, [but] the intention is to get him.”

Except, there was a hiccup.

Minda had either gone through his fledgling career without leaving much of a trace, or he wasn’t the player who had previously played at top-flight Monarcas Morelia (which was recently moved to Mazatlan and replaced by the new Atletico club) and had been loaned out to Alebrijes de Oaxaca, as his Instagram and Wikipedia pages indicated.

Morelia journalist Miguel Garcia started digging. It turns out that the Wikipedia page was created on June 29 and that Minda had never been at Morelia.

Stories in the national press in Mexico spread about the “fake” footballer. Minda’s Wikipedia page has since been deleted, but a Google search still shows a result for him edited to say he plays as a “central liar” in “the league of his dreams.”

Minda, to his credit, got in touch with ESPN on Monday to apologise to Morelia fans and clear things up.

It turns out that he’d gone to the stadium to check it out and took a photo, “like any fan.” But media members waiting outside asked him for an interview, apparently assuming he was a player.

In his own words, Minda told ESPN: “I arrived at the stadium and the press was waiting outside, then [someone from newspaper] Sol de Morelia asked me to say ‘hi’ to the fans. I’m a humble person, so I gave the interview and as everyone knows the city of Morelia has been left without a club, so I tell all the Morelia fans that we’ll bring back joy because Morelia deserves it. That’s how the video was filtered.”

Minda added that he had been on trial briefly at Alebrijes de Oaxaca and with Morelia’s under-20s team, but had never been registered to play. He’d advanced through the youth system at Nacional, the same club future Manchester United star Antonio Valencia came out of, but an elbow injury had curtailed his career before he took a chance and moved to Mexico.

Fame-hungry chancer or victim of circumstance? Whichever way you look at it, Minda has certainly made a name for himself. And he is certainly not the first ‘fake footballer’ to leave a real club looking foolish.

Astonishingly, not only did the ruse work without a hitch but Dia came off the bench, replacing club great Matt Le Tissier, and managed to wrangle a 47-minute Premier League career out of it before being subbed off again by a furious Souness, never to return.

A player so great he was given the nickname “Kaiser” by those who witnessed him in action, Raposo managed to elevate himself to ridiculous heights without ever setting foot on the pitch.

The enigmatic star enjoyed stints at some of Brazil’s biggest clubs during the 1980s, turning up at Fluminense, Flamengo, and Vasco de Gama, as well as assorted other clubs in Mexico, France and the U.S..

As the story (told in the feature-length documentary “Kaiser!”) goes, the secret to his enduring success was his ability to befriend established players, use their influence to engineer recommendations to other clubs, prove he was fit enough to earn short-term contracts there, feign “muscle injuries” whenever convenient and then move on again once the game was up — usually without making a single competitive appearance.

Danish club Viborg FF were forced to file a criminal complaint last year when they realised they had been duped into signing a “fake” footballer by the name of Bernio Verhagen.

The 25-year-old Dutchman supposedly arrived at Viborg from Chilean side Audax Italiano, but it soon became apparent that he’d never played for them.

Verhagen was then removed from his first training session after it quickly became apparent he was not a player of professional standard, or even anything close to it. The police were called and an investigation into the midfielder’s murky past began.

Shockingly, it was discovered most of Verhagen’s previous clubs had no record of him ever being under contract and that his various adventures around the world might not be entirely above board.

Incredible story in Lithuanian football. 2nd division side Panevėžys have signed Barkley Minguel-Panzo and seemed to believe in his fake story. His Wikipedia page states he scored 45 goals in 36 matches for Queens Park Rangers. He actually never played for them. pic.twitter.com/I1eMPNIeGO

Panzo is something of a latter day Carlos Kaiser in that he duped a Lithuanian second division side into signing him on the back of a fake Wikipedia page.

FK Panevezys took the plunge on the “Angolan international striker” in 2018 after being suitably impressed with the stats listed on Panzo’s Wiki career — including a phenomenally prolific stint at Queens Park Rangers in which he scored 45 goals in 36 appearances.

There was only one problem: His career was all completely conjured up out of the very thinnest of air.

Zarrelli was an Italian amateur footballer who conned himself a move to Northern Irish club Lisburn Distillery using a fake CV. He claimed to have been a youth player at Sheffield Wednesday, MK Dons and Rangers while trying to secure a move to several clubs in Northern Ireland and Wales in 2005.

The midfielder even reportedly told Distillery that he was playing in Britain as part of a cultural exchange programme between The FA and the Italian Football Federation. This was obviously enough to convince Distillery to make their move, signing Zarrelli on a short-term contract before swiftly realising their error of judgement.

The following year his rolling scam was rumbled once and for all when the 22-year-old was caught out by an agent sting organised by Sky TV programme “Superfakes.”

However, that didn’t stop Zarrelli earning a second chance as a non-league player, going on to play for a succession of other teams before being tragically killed in a car accident in 2018.