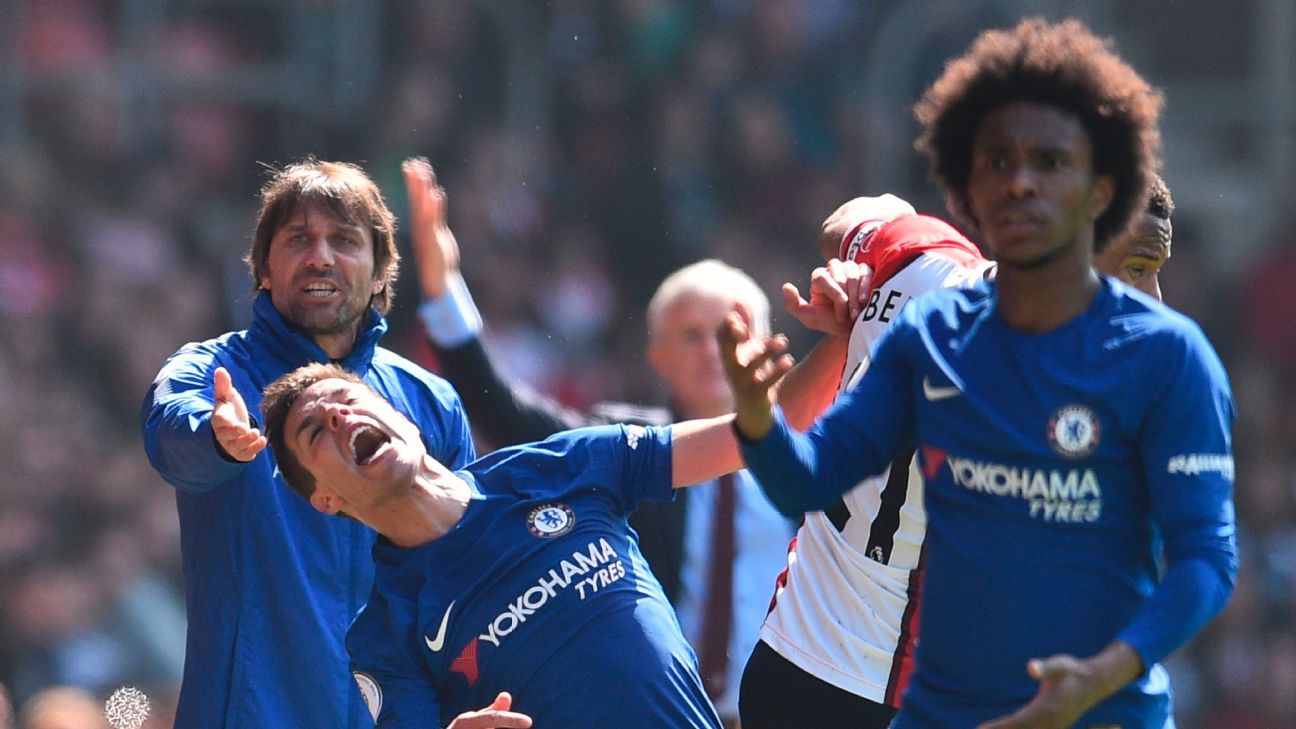 The former Shakhtar Donetsk star had a rocky relationship with Conte during their two years together at Stamford Bridge, with the Brazil international at times finding it difficult to hide his disillusionment with the Italian coach.

Willian had seen his playing time significantly decrease at Chelsea after storming down the tunnel during an April FA Cup semifinal win against Southampton and he refused to discuss his relationship with Conte in an interview with ESPN Brasil the following month.

And his discontent seemingly came to a head when, after Chelsea defeated Manchester United in the May 19 FA Cup final, he obscured Conte’s face in a celebratory team photo he shared on social media.

“I hope he [Sarri] is not like Conte,” Willian told ESPN Brazil. “No, I’m kidding!

“For me, Conte was a manager very difficult to work with. His philosophy, his way of dealing with things is very complicated. There were a few games … Sometimes we just don’t understand. You’re playing very well, then you get substituted. I do not understand. There were two times when I got substituted and I went straight to the locker room. It was hard to work with him.

“But in life, we learn from these kinds of things. We learn so much from difficulties. There were two years when I stayed on the bench in so many games, coming in later in the game. But this is in the past. The important thing now is to talk about Sarri. From what I heard, I am sure he is a great manager, who does a great job with the team. I have high expectations for working with him.”

Asked why he’d covered up Conte in the controversial Instagram post, Willian said with a laugh: “My daughter was playing with my cell phone and she ended up putting those emojis over Conte!

He said: “For me, since the beginning, since he arrived, I knew it would be hard. After the final … I got a plane right after the game to come to Brazil. When I got here, early in the morning, I was posting some champion pictures … Well, I was a bit too tired and ended up posting them like that.”

Willian reckoned his difficult time under the former Juventus and Italy manager came down to issues he couldn’t control.

Willian wasn’t the first Brazilian to have problems with Conte during his Chelsea tenure. Former striker Diego Costa left the club to rejoin Atletico Madrid after a falling out with the coach on the training pitch two seasons ago. And defender David Luiz lost his place in the team last term after engaging in an argument with Conte following a Champions League loss at Roma.

Willian added: “With Diego … I remember I was … It was after the regular season, I was in Australia with the Brazilian national team and Diego texted me. He said: ‘I’m leaving. Conte said he doesn’t need me anymore.’

“I said: ‘What do you mean?’ And he said: ‘He texted me saying that he doesn’t need me on the team anymore and I am not supposed to go back.’

“But you can’t lose a player like Diego [Costa]. It was a difficult situation.”